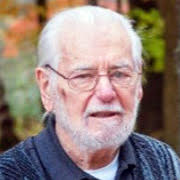 James was born on April 26, 1929, in Green Bay, Wis., son of the late Emmet and Clara (Rachels) Tatosky. James attended school in Green Bay. He married Pearl Hazaert on July 9, 1951. They spent almost 68 wonderful years together and raised three children. Jim and Pearl were inseparable and thoroughly enjoyed life together. They camped, fished, hunted, golfed, skated, cross-country skied and traveled. Whatever his interest was, he always had the love of his life – Pearl by his side.

James joined the Navy in 1948 and served on the destroyer “The Goodrich DDR 831” and “The Turner.” He told many a good tale about his time with his mates on the ship. A good one was when he purchased a bunch of bananas for a quarter and got the whole stalk that he had to carry on his shoulder. There was enough for everyone on the ship. He also fished for the captain “The Old Man” to supply fresh fish for his dinner.

James was a devout Lutheran his whole life and a member of St. John’s Lutheran Church in Florence, Wis., for the past 43 years.

He was employed at the Northern Paper Mill in Green Bay. James then worked as a mechanic for LeMieux and Son Honda. Later he worked as the service manager when it became LeMieux Toyota. James moved to Florence and accepted a mechanic job at Bergeron Toyota in Iron Mountain so he could pursue his love of hunting and trout fishing up north. Jim finally became his own boss by starting a gravel and excavation business with his son’s help. Grandson Jeremy followed in his footsteps, becoming a Master Mechanic.

Woodcarving was a passion that he started in his early years by making his own working decoys. He later developed that passion by carving original works of art — animals, birds, fish, totem poles, walking sticks, tables, gun stocks, and also painted saw blades. Grandsons Jeremy and Matthew spent time learning some of his carving and wood burning techniques in the shop. James never wanted to carve the same thing twice. Many of his original works are enjoyed by family, friends and purchasers around the world.

Hunting also was a priority every year and he looked forward to the opening day of each season with great anticipation. James was successful almost every year and his home showcases many of his trophies. Some of his greatest thrills were hunting with his son, Tim and daughter, Susan. The year all three filled their tags was the best and was of course photographed for posterity. He taught the grandkids to hunt and even gifted each with their own rifle one Christmas. Granddaughter Jessica was always his favorite fishing partner.

Jim was always ready for a good game of cards at a moment’s notice. He loved cribbage and poker. Jim’s eyes lit up if you mentioned we could get together enough players for poker and would go get his poke for the game. The grandkids even had their own pokes for cribbage or rummy so they would be able to play as a family. Grandson Chris lived with Gram and Gramps for a time and loved waking up on Christmas morning with the giant tree decorated and Gramps playing Santa, riding with Gramps in the cruiser, the horse “Dingbat,” playing with the great-grandchildren, and sharing Packer stories. Grandson Matt remembers Grandpa saying he didn’t like cats but would pet Matt’s cat when he was with him. Matt also gifted Grandpa one of the pups “Mocha” from his dog’s litter.

Visiting with his buddies and sharing stories always raised a clamor of laughter in the house. James had a sense of humor about him that would make you laugh. He could tell a story that would hold your interest and kept you on the edge of your seat.

He is also survived by many nieces, nephews and very dear friends.

James was preceded in death by his parents, Emmet and Clara Tatosky; his in-laws, Edward and Clara Hazaert; son-in-law, Russell Hermsen; brothers and sisters-in-law, Herbert and Elaine Hazaert, and George and Vera Hazaert.

James will be sadly missed by all who knew him.

In abiding by his wishes, there will be no services. He will be laid to rest this fall.

Contributions can be made to The Veterans Honor Flight in memory of James Richard Tatosky Navy Seaman to allow veterans to fly to Washington and view the memorials to their service to our country.

You may leave a condolence or tribute for James’ family online at www.JacobsFuneralHomes.com.

The family has chosen the Jacobs Funeral Home and Cremation Services, Iron Mountain to honor James’ legacy of life.