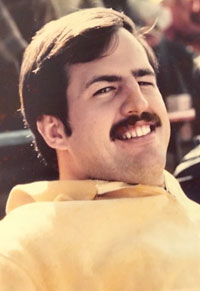 Craig was born in Montana to Dr. Chester and Lorraine (Wagner) Holmes. He spent his childhood mostly in Tennessee where he learned to care for animals, including a horse named Dolly and a bulldog named Major that he shared with his sister, Terry. He also developed his love of jokes and pranks with his best friend, Ronnie.

An avid football fan, Craig played football for Saint John’s Military Academy, where he was the captain of the football team.

Summers were spent in Door County, Wis., working on a charter fishing boat. He attended Lawrence University where he met his future wife, Beth Bornfleth, and the University of Oregon.

They were married on Sept. 5, 1970. The couple lived in Memphis while Craig attended medical school at the University of Tennessee. Craig then began his residency at the Mayo Clinic in Rochester, Minn., where his father had also attended. After completion, Craig and two other physicians formed Internal Medicine Associates in Muskegon, Mich., at Hackley.

Craig and Beth had two children, Lindsey and Christopher.

The children were raised on and around docks and boats, usually with a dog nearby. They learned to respect the water early on and the family went boating and fishing. Christopher especially enjoyed boating and gained much of his father’s knowledge.

After years of private practice, Craig began working for Veterans Affairs in Iron Mountain. His leadership abilities were quickly recognized and in time he became Chief of Staff. As retirement got closer, Craig and Beth looked to Wisconsin to be closer to Packers games and Door County.

They settled in Suamico, but sadly Beth passed away as Craig was planning his retirement.

His heartbreak was soothed when he reconnected with a friend from Muskegon, Linda McKendry. They married in Door County and Craig was grateful for the loving companionship. Together they watched football games, cared for their dogs, and spent time at the cabin.

When Craig became ill, Linda could not have been more devoted. The world has lost a wonderful father and husband, a gifted physician, and a teacher of kindness.

Craig is survived by his wife, Linda; his daughter, Lindsey and son-in-law, Tshecomah Fisher; and his son, Christopher and expectant wife, Anne and their son, Campbell.

A memorial service will be planned for Nov. 23 at Blaney Funeral Home in Green Bay, Wis. Details to follow.