Several words have been spoken about Paul since he began his battle. Loyal. Loving. Honest. A man of great integrity. A true friend. Someone said he had the best smile. “Your dad was an amazing man who always greeted with a hug and knew how to make everyone he met feel special.” He taught life lessons.

Through the years, Paul was generous with his time, teaching his daughters, their cousins, and friends how to play tennis or basketball and snow ski or water ski. He was generous with his wallet, too. One of Kathryn’s friends wrote, “We never would have made it through college without visits from your parents taking us out for dinner.”

On the opening day of deer season, Nov. 19, 1947, June (Reiten) and Evo Santoni headed to the hospital to await the birth of their first child, Paul Martin Santoni.

Paul attended school in Kingsford, graduating with the Class of 1965. 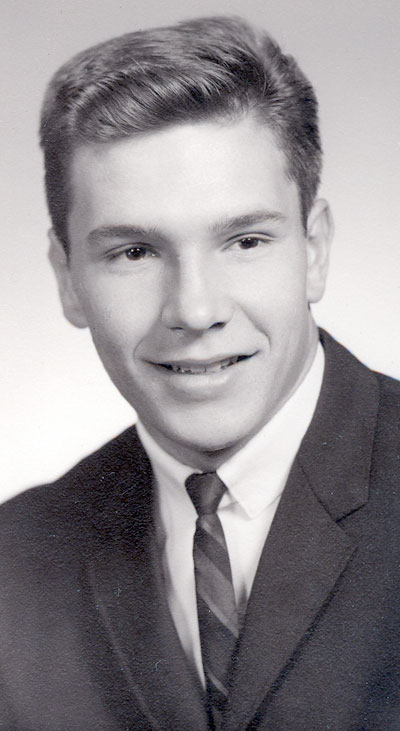 In January 1970, he graduated from Northern Michigan University. Paul’s high school and college years were filled with the pursuit of athletics. His dad always said, “We put a ball in his crib, and he started playing with it.” Paul had the good fortune to be part of a class that loved sports and excelled on the field and in the gym. Paul was awarded first team conference and UP Honors for football.

Paul and Dick Berlinski and Dwight Romagnoli were captains of the varsity football team. His lifelong friend, Rich McCarthy, was the quarterback of that award-winning team, which achieved the title of Conference Champs and were Barber Trophy recipients in 1963 and 1964. After high school, Paul and Rich McCarthy continued their football careers as end and quarterback at Northern Michigan University. In 2016, Northern’s 1967 football team was inducted in the Sports Hall of Fame. In 1968, the football program honored Paul with the Award for Academic Excellence.

On the basketball court, the 1965 Flivver team established a winning record before losing to River Rouge in the state semifinals. Paul was invited to play basketball at NMU but declined. The Flivvers won UP track honors in 1963 and lost by a point in 1964. As a member of the mile relay team, Paul helped set a Menominee Range record in 1964.

In August 1967, Paul married Annette Marie Carlson. After graduation from NMU, they returned to the Iron Mountain-Kingsford area, and he began his career as manager of Santoni Lumber and Fuel.

Paul was preceded in death by his mother and father, June and Evo Santoni; his mother-in-law and father-in-law, Ella Carlson Mette and Nobel Carlson; his step father-in-law, W. Glenn Mette; his sister-in-law, Lenore Carlson Kelly; and his granddaughter, Daniela Lyn Oswald.

Paul is survived by his wife of 52 years, Nettie; and his daughters, sons-in-law, and grandchildren, which include Maria and Justin Samuels and their girls, Madelyn Lenore and Charli June of De Pere, Wis.; Kathryn and Chad Menza and their children, Maren Elizabeth and Lucas John of Kingsford; and Kristina and Scott Oswald and their daughter, Abigail Lucia of Highland.

Paul is also survived by a brother and sister and their spouses: Albert and his wife Paula, and Kathryn and her husband, Stephen Lewis.

He is also survived by his brother-in-law, William Kelly.

Paul received great love and support from many wonderful friends and neighbors. Special thanks goes out to Kristi and Richard Celello, Kathryn and Michael Harvey, and Susan and Jim Santini.

Paul’s family would like to recognize and thank Dr. Stephen Leonard for his support during this journey of nine months. Further thanks are extended to Dr. Morel and staff; Dr. Shaker and staff; the doctors, nurses, and staff at Dickinson County Healthcare System; and Jamie Paternoster and Sarah Stanek in the Rehab Department of the hospital.

Condolences may be expressed to the family of Paul Santoni online at www.ernashfuneralhomes.com.