Democratic pledges against big money come with an asterisk 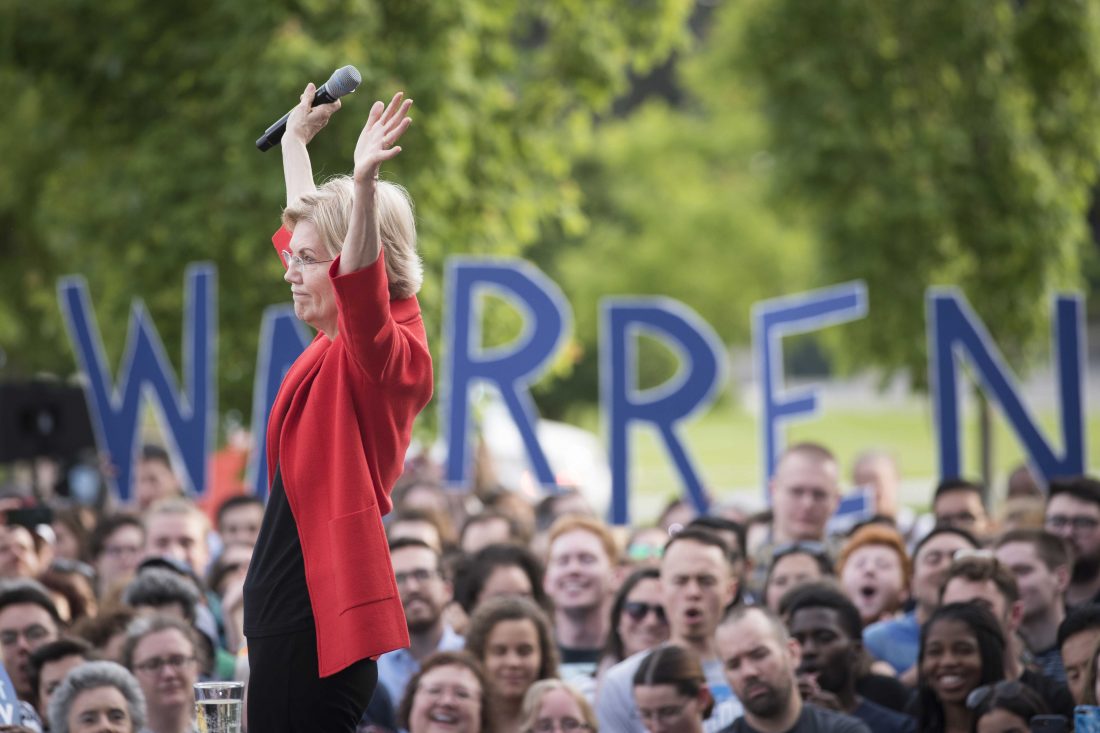 Democratic presidential candidate Sen. Elizabeth Warren, D-Mass., addresses a May 16 campaign rally at George Mason University in Fairfax, Va. Warren has vowed no untraceable dark money will help her, despite being backed by an organization that doesn’t disclose some of its donors.

WASHINGTON (AP) — Bernie Sanders wants to crack down on outside groups that do political spending, though one is allied with his presidential campaign. Elizabeth Warren has vowed no untraceable “dark money” will help her White House bid, despite being backed by an organization that doesn’t disclose some of its donors. And Pete Buttigieg accepted lobbyist money — until he didn’t.

Virtually all Democrats running for the White House rail against the flood of campaign cash that courses through the political system. But as the primary unfolds, it’s becoming clear that those pledges come with asterisks.

“It’s easy to speak big,” said Sarah Bryner, research director for the nonpartisan Center for Responsive Politics, which tracks the influence of money on elections. “But they have to get elected, and they know that.”

Many White House hopefuls say they are eschewing cash from lobbyists and corporate political action committees as well as assistance from outside groups that can accept donations in unlimited amounts. It’s part of an effort to appease a progressive Democratic Party base that believes rich donors and corporate interests wield too much influence over elections.

But what often sounds like an iron-clad promise from a candidate frequently includes subtle caveats and omissions.

Former Texas Rep. Beto O’Rourke signed a “No Fossil Fuel Money Pledge,” vowing to swear off donations over $200 from the coal, oil and gas industries during his presidential run. But he did not mention that, during the 2018 midterms, his Senate campaign was one of the biggest recipients of contributions from the oil and gas sector, according to data from the Center for Responsive Politics.

And though former Vice President Joe Biden has sworn off federal lobbyist money, a campaign kickoff fundraiser was held at the Philadelphia home of David L. Cohen, who oversees Comcast’s lobbying efforts in Washington but isn’t required to register as one under the law. Biden’s campaign declined to comment.

Outside groups such as super PACs and “social welfare” nonprofits are a particularly thorny subject. They can raise and spend unlimited sums supporting a candidate — often without disclosing donors — so long as they do not coordinate directly with the candidate’s campaign.

Both Warren and Sanders have staked their political personas around opposition to big money in politics.

“I do not have a super PAC, and I do not want a super PAC,” Sanders, a Vermont senator, said after defeating Hillary Clinton in the 2016 New Hampshire primary.

Yet he is backed by Our Revolution, a nonprofit founded by longtime allies that functions much like a super PAC. The group has collected six-figure contributions and plans to run phone banks and organize rallies supporting Sanders. They are also seeking volunteers to knock on doors.

Our Revolution, which raised $6.8 million in 2016 and 2017, has released only limited information about the sources of its money. Current campaign aides who helped found it include Nina Turner, who stepped down as president to join the White House bid, and longtime Sanders strategist Jeff Weaver. Sanders also helped get the group off the ground.

Sanders spokeswoman Sarah Ford said Our Revolution has no direct involvement in his White House campaign. She didn’t directly address a list of questions from The Associated Press.

The group says it takes transparency seriously and discloses donors on its website, though it does not list how much was given. In some cases, the group omits names altogether, listing them as “anonymous.” The source of a $100,000 check, for example, was blank on the group’s 2017 tax forms. The same goes for a $300,000 donation reported on the group’s 2016 taxes.

“If people are requesting to be anonymous, we have to respect their wishes,” said Our Revolution spokeswoman Diane May, who also tried to differentiate the group from super PACs that are used to pay for TV ads.

“We are spending this money to empower our grassroots,” she said. “I would say that’s the main difference.”

No candidate has been more vocal about her personal campaign finance rules than Warren.

At least during the Democratic primary, she has ruled out attending big-dollar fundraisers, says she isn’t taking “applications from billionaires” to run a super PAC and has repeatedly blasted “dark money” groups that don’t reveal their donors.

But her campaign has struggled to raise money, and she is being kept afloat with $10 million transferred from her Senate account, which is money raised at a time when she still attended the big-dollar fundraisers she now criticizes.

Warren is also backed by the Progressive Change Campaign Committee. The group was founded before she first ran for the Senate but now bills itself as the “Warren wing” of the Democratic Party. It champions progressive policies that Warren has supported and says it helped her raise $2 million for past campaigns.

“We can’t imagine a better use of our time, resources, energy, enthusiasm, creativity, door knocking, phone calling, Facebooking, Tweeting, and fundraising at this moment than ensuring that Elizabeth Warren starts strong and is successful,” the group said in an email when she launched her campaign.

The group operates a complex web of interconnected organizations, including a PAC, two nonprofits that do not disclose donors and a super PAC. A separate wing, which finances efforts to build an army of progressive officeholders in Warren’s mold, accepts unlimited sums.

That includes a $120,000 check cut by Paul Egerman, Warren’s campaign treasurer, as she was on the verge of launching her White House bid. He has given about $560,000 to that wing of the group since 2013, according to an analysis of IRS records.

Adam Green, co-founder of the Progressive Change Campaign Committee, says money raised by this arm is spent training candidates for office and is not being used to help Warren. Tax filings from 2016 and 2017 show past expenses include get-out-the-vote efforts, issue advocacy, “running support for progressive candidates” and “engaging presidential campaigns on progressive issues.”

Other donors to it include George Soros, New Jersey publisher John Langan and California real estate developer Lawrence Hess and his wife, Suzanne, who have given at least $1.2 million since 2011, according to IRS data.

“(Warren) does not believe that the Democratic nominee should be determined by who can line up the most support from billionaires and millionaires, but she does support having grassroots organizations having their voices heard in this process,” Warren spokeswoman Kristen Orthman said in a statement.