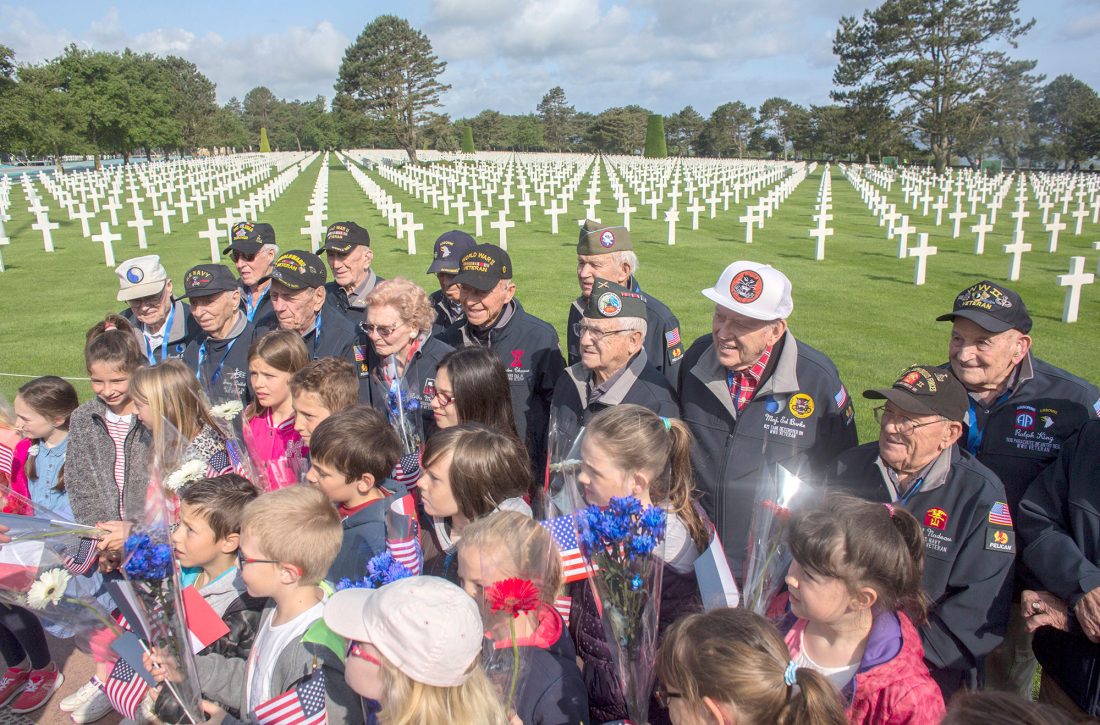 SAINT-LAURENT-SUR-MER, France (AP) — Anyone who lives long enough knows that children soak up memories that can stay with them forever. A hardy bunch of 90-somethings are counting on it.

A group of French students joined 15 World War II veterans from the United States who returned this week to the beach U.S. troops stormed on D-Day and an emotional ceremony at the Normandy American Cemetery that overlooks it.

With fewer men left to share war stories, a focus of commemorations for the 75th anniversary of D-Day has been keeping their memories from June 1944 alive by passing them on to the youngest generation.

One of the French children who heard firsthand accounts of D-Day, 10-year-old Martin Deshayes, marveled at the thousands and thousands of troops who landed on beaches when Germany occupied his country.

“There are so many who have died for us, to rescue us,” Martin said. “If they hadn’t landed at that time, maybe we would be Germans now or we wouldn’t exist.”

The faces of the American veterans and the French youngsters conveyed emotion as they posed for a group photo on Omaha Beach.

“We lost hundreds of our men trying to take this particular spot,” Brian Goodbrake, a history teacher who traveled from Nebraska with 48 students, said.

Standing there provides an understanding of the scope of the fighting in Normandy that can’t be communicated any other way, Goodbrake said.

“I’ve studied this for 20 years. World War II is one of my areas of specialty,” he said. “I don’t think I understood it until I was here the first time, stepping in the bomb craters, going into the German command center. I got it, finally,” he said.

One of the Nebraska students, Maximillian Pearson, 18, shared his teachers’ astonishment and respect.

“It’s absolute awe, because I turned a corner and just all of a sudden you see all these crater sites from all the bombs, and you just see all these vets all over the place,” Pearson said.

Several thousands of students from the United States and Canada are touring Normandy and attending D-Day commemorations. Some get to ask a panel of veterans questions at Utah Beach later in the week.

Erin McGrew, 18, from Colorado, imagined what Allied troops her age and even younger experienced, their fears and exhaustion.

“It’s different to see it in person and see where it actually happened. I think it makes it more real,” she said.

Some students were so moved they could hardly speak.

In the city of Caen, which was destroyed by bombing after the D-Day landings, the local memorial museum was full of children as the anniversary approached. Some 110,000 students visit each year.

To help children better understand the war, the Caen Memorial Museum immerses them in recreated scenes and allows them to touch objects from daily life. The aim is to evoke historic context without showing them horrifying images.

While the museum once organized events featuring veterans and other bombing survivors, it also anticipated the need for capturing what they lived through in a way that would ensure, such as video recordings.

She described the fascination of a group of children who recently happened to see a veteran at the museum.

“We see them on the beaches. We see them in the museum. They’re here, and won’t be anymore,” Bournier said.

WASHINGTON (AP) — On a day meant for unity and celebration, President Donald Trump vowed to "safeguard our ...