Vindman reminds Trump allies: ‘I am an American’ 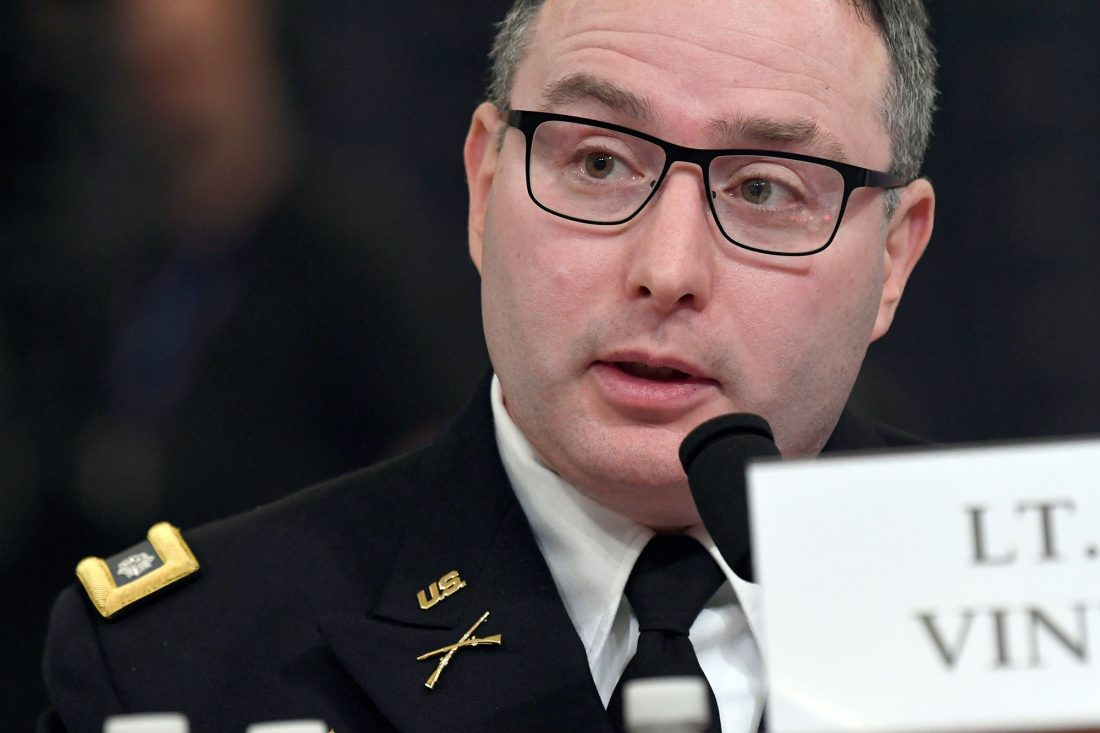 With that, the Iraq War veteran, his chest flush with ribbons and commendations, tersely reminded Republican lawmakers questioning his judgment and loyalty just whom they were trying to discredit as the impeachment drive against President Donald Trump veered into the personal.

Alexander Vindman: Purple Heart recipient, career diplomat, Army infantry officer. And this: “I am an American.”

Vindman, a Soviet Jewish immigrant, felt it necessary to state his allegiance as he batted away Republican questions about the offers he got to work for Ukraine’s government. “I immediately dismissed these offers,” he said. Still, the queries carried an implicit suggestion of disloyalty.

When the senior Republican on the House Intelligence Committee, Rep. Devin Nunes, looked down from the dais Tuesday and addressed the witness as “Mr. Vindman,” the pushback was unmistakable.

The exchange highlighted the extent to which identity politics are playing a role in the impeachment investigation against the 45th president on the cusp of the 2020 election year. Trump has fueled the who-are-you nature of American politics ever since he announced his candidacy in 2015 with a declaration that some Mexicans are criminals and rapists.

Trump and his allies tried to identify Vindman and fellow witness Jennifer William, an adviser to Vice President Mike Pence, as “Never Trumpers.”

“I’m not sure I know an official definition of a ‘Never Trumper,'” Williams said, but she rejected the label.

Vindman, with his military bearing and increasingly confident performance, presented a special challenge for Republicans struggling to defend Trump’s pressure campaign to get Ukraine to investigate Hunter Biden, the son of Trump’s Democratic rival Joe Biden. Some GOP lawmakers thanked Vindman for his service even as they questioned his loyalty, to the president and the nation.

“I don’t know him. I don’t know, as he says, ‘Lieutenant Colonel.’ I understand somebody had the misfortune of calling him ‘Mister’ and he corrected them,” Trump said. “I never saw the man.”

But before Vindeman finished testifying, the White House was raising fresh questions about him on its official Twitter feed.

Vindman was 3 years old in 1979 when his family fled Ukraine for the U.S. Earlier in his Army career, Vindman served as an infantry officer and did tours in South Korea, Germany and Iraq. In October 2004, he was wounded by a roadside bomb and awarded the Purple Heart.

Since 2008, he’s served as a foreign area officer specializing in Eurasia, leading him to stints in Kyiv and Moscow. Vindman also served as a political-military affairs officer for Russia for the chairman of the Joint Chiefs of Staff. He moved to the Trump White House in July 2018 after being tapped to serve on the National Security Council. Voting records show Vindman was previously registered as a Democrat.

Testifying in full uniform, he was unafraid to call out his commander in chief: Trump’s lean on Ukraine to gain information on a Democratic rival was “improper,” Vindman said.

“Without hesitation, I knew I had to report this,” Vindman testified. “It was inappropriate, it was improper for the president to demand an investigation into a political opponent.”

As Republicans questioned his dedication and his service, Vindman shifted from visibly nervous to steady and even defiant.

“Lt. Col. Vindman, I see you’re wearing your dress uniform,” Stewart said, thanking Vindman and his brothers for their service. “Do you always insist on civilians calling you by your rank?”

Vindman said he wore his uniform because he had been subjected to Twitter “attacks” that seemed to “marginalize me as a military officer.”

“I just thought it was appropriate to stick with that,” Vindman said of his uniform.

Stewart replied that Nunes “meant no disrespect to you.”

But Democrats weren’t ready to let the matter go.

“Your loyalty is being questioned … because you are an immigrant,” said Rep. Raja Krishnamoorthi, D-Ill., himself an immigrant.