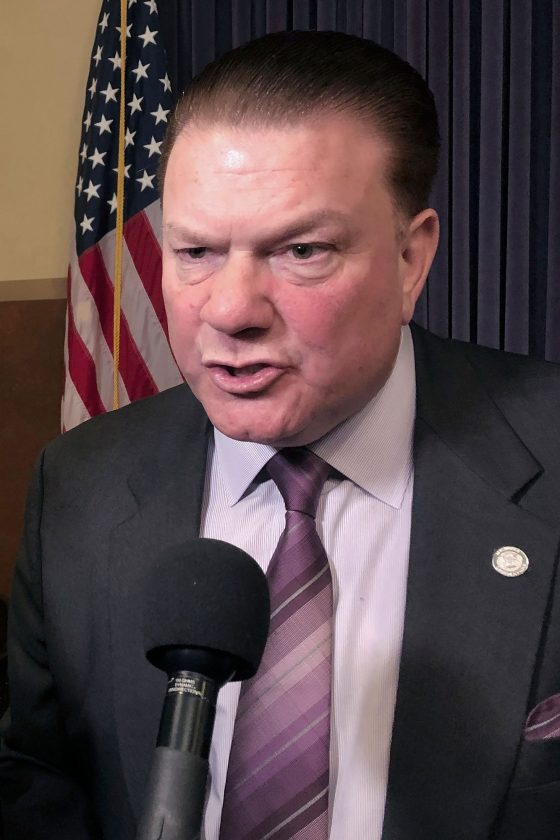 LANSING, Mich. (AP) — A Republican state lawmaker will be subject to a sexual harassment investigation for telling a young female reporter she could have “a lot of fun” with a group of high school boys visiting the Michigan Capitol, legislative leaders said Wednesday.

State Sen. Pete Lucido, 59, of Macomb County’s Shelby Township, issued a brief apology earlier in the day, after the Michigan Advance journalist published a report detailing their interaction outside the Senate chamber on Tuesday.

Allison Donahue, 22, said she asked Lucido for an interview to discuss his participation in a Facebook group that was shut down after some members advocated violence against female Democrats. He said he could talk after honoring roughly 30 students from De La Salle Collegiate, an all-boys Catholic high school in suburban Detroit from which Lucido graduated.

She wrote that his comments were “belittling and came from a place of power.” After the interview, she said, she told him his comment was unprofessional and that he would not have said it to a male reporter or an older journalist.

Lucido, she said, assured her he meant no harm and said it can be awkward for students at an all-boys schools to interact with girls — referencing how he did not know how to act around women when he went to college.

“I said it to an all-girls school last week, ‘How would you like to have all the boys from the Senate come over?” he said. “It was nothing disingenuous. It was no harm.”

Lucido, who is married and has three children, initially told the Detroit Free Press that he did not feel he owed the reporter an apology and that the quotes were taken out of context and had been blown out of proportion. But later Wednesday he changed course.

“I apologize for the misunderstanding yesterday and for offending Allison Donahue,” Lucido said in his statement. He did not apologize directly to Donahue. In another about-face, he later alleged to WDIV-TV in Detroit that he had been misquoted. He said he told her “we’re going on the (Senate) floor to have some fun. You’re welcome to join us.”

“Sexual harassment has no place in the Michigan Senate,” they wrote. “We take these allegations seriously and trust that you will take appropriate action to resolve this matter.”

It was not clear what type of punishment could be levied.

Earlier, Shirkey said he intended to “have a very intense and lengthy conversation with the senator as soon as we’re done with session. If those words that were reported are accurate, it’s very unacceptable and that’s all I’ve got to say about it.”

“What his statement, his apology was basically saying (is), ‘I’m sorry you realize I’m a jerk, and I’m a creep,'” he said, adding that journalists and “anyone in this building” should be offended. “Leaders in this state, whether they’re men or women, they don’t act like this.”

Lucido said this month that he was weighing whether to run for governor in 2022, when Democrat Gretchen Whitmer will be up for reelection.

WASHINGTON (AP) — Democratic voters feel generally positive about all of their top candidates running for ...

RINDGE, N.H. (AP) — A group of Los Angeles artists were awaiting the results of the Democratic Party’s Iowa ...

WASHINGTON (AP) — Through a year of campaigning, the Democratic presidential candidates played nice, talking up ...

Sanders moves to expand his campaign staff in Michigan before primary

UP drivers deserve a plan that fixes roads here, not just Detroit

During her State of the State address late last month, Gov. Whitmer announced she was giving up on her first ...