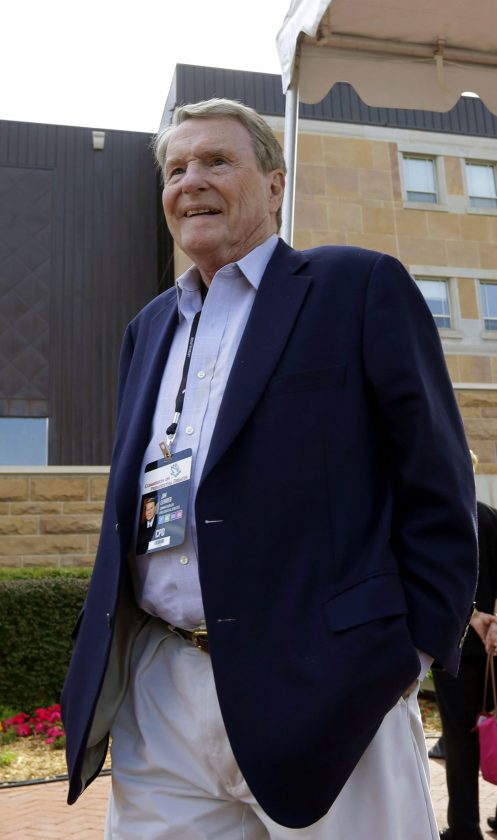 NEW YORK (AP) — Jim Lehrer, longtime host of the nightly PBS “NewsHour” whose serious, sober demeanor made him the choice to moderate 11 presidential debates between 1988 and 2012, has died, PBS said Thursday. He was 85.

Lehrer died “peacefully in his sleep,” according to PBS. He had suffered a heart attack in 1983 and more recently, had undergone heart valve surgery in April 2008.

For Lehrer, and for his friend and longtime partner Robert MacNeil, broadcast journalism was a service, with public understanding of events and issues its primary goal.

“We both believed the American people were not as stupid as some of the folks publishing and programming for them believed,” Lehrer wrote in his 1992 memoir, “A Bus of My Own.”

“We were convinced they cared about the significant matters of human events. … And we were certain they could and would hang in there more than 35 seconds for information about those subjects if given a chance.”

Tributes poured in from colleagues and watchers alike, including from Fox News’ Bret Baier, who called Lehrer “an inspiration to a whole generation of political journalists– including this one.” Dan Rather said “few approached their work with more equanimity and integrity than Jim Lehrer.” And Jake Tapper of CNN called Lehrer “a wonderful man and a superb journalist.” House Speaker Nancy Pelosi called him a “champion for truth and transparency.”

Many Americans knew him best for his role as debate moderator. For seven straight presidential elections, he was the sole journalist sitting across from the candidates for the first debate of the general election campaign. In 1996 and 2000, he moderated all of the debates — five of them — and a vice presidential contest to boot.

He told The Associated Press in 2011 that his goal was to probe the candidates’ thinking and avoid “gotcha” questions. He felt his best debate performance was in 2004, with George W. Bush and John Kerry, not because of anything he did, but because the candidates were able to state their positions clearly.

“I didn’t get in the way,” said Lehrer, whose book “Tension City: Inside the Presidential Debates” told stories of his experiences. “Nobody was talking about what I did as a moderator. I didn’t become part of the story.”

He was lured out of retirement for his last debate in 2012 and it may have been a mistake; he received criticism that year for having too light a touch on the proceedings.

The half-hour “Robert MacNeil Report” began on PBS in 1975 with Lehrer as Washington correspondent. The two had already made names for themselves at the then-fledgling network through their work with the National Public Affairs Center for Television and its coverage of the Watergate hearings in 1973.

WASHINGTON (AP) — In a decision flavored with references to "Hamilton" and "Veep," the Supreme Court ruled ...