US long watched Soleimani but feared risks of a strike 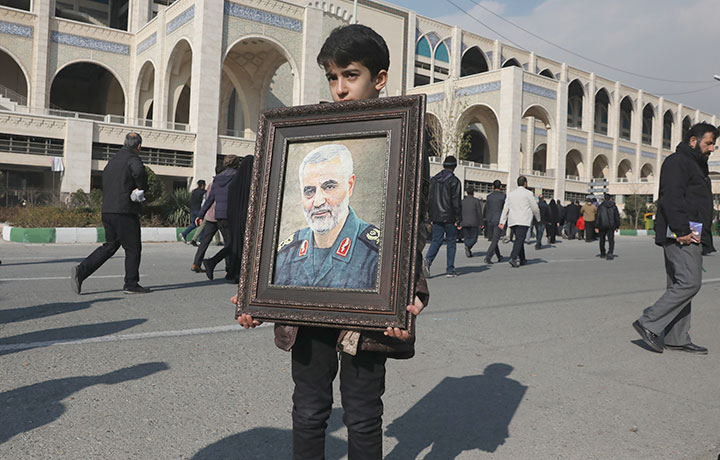 A boy carries a portrait of Iranian Revolutionary Guard Gen. Qassem Soleimani, who was killed in the U.S. airstrike in Iraq, prior to the Friday prayers in Tehran, Iran. (AP Photo/Vahid Salemi)

WASHINGTON (AP) — In 2007, U.S. commandos watched as a convoy carrying a powerful Iranian military leader made its way to northern Iraq.

It was a prime opportunity to take out Gen. Qassem Soleimani, who had been accused of aiding Shiite forces that killed thousands of American troops in Iraq. But ultimately, military leaders passed on a strike, deferring to deep concerns about the potential fallout of such a provocative attack.

“To avoid a firefight, and the contentious politics that would follow, I decided that we should monitor the caravan, not strike immediately,” retired Gen. Stanley McChrystal wrote last year in Foreign Policy.

Fears about the repercussions and reverberations of a targeted killing of Soleimani persisted throughout the administrations of President George W. Bush, a Republican, and President Barack Obama, a Democrat, according to officials who served under both. Soleimani, they calculated, was just as dangerous dead and martyred as he was alive and plotting against Americans.

That approach came to an end this week when President Donald Trump authorized an airstrike against Soleimani. He was killed after his plane landed at the Baghdad airport.

Trump heralded the attack on Twitter, declaring that Soleimani “should have been taken out many years ago!”

But some former administration officials argued that despite Soleimani’s role in orchestrating deadly attacks on U.S. troops, Trump’s decision may ultimately put Americans in the region at heightened risk.

“Previous presidents have had the opportunity to take measures like what we saw last night but have held back because of the risks entailed and the questions that were there about where this would all lead,” said Derek Chollet, an assistant secretary of defense during the Obama administration. “Unfortunately, those questions are not any clearer today.”

Indeed, Trump’s strike against Soleimani, the head of Iran’s elite Quds Force, thrusts Washington and Tehran into uncharted territory after months of rising tensions. It’s unclear how or when Iran will respond, or whether that response will pull the U.S. deeper into a military conflict abroad.

In the hours after Soleimani’s death, the State Department urged American citizens to “immediately” leave Iraq and defense officials said the Pentagon was sending nearly 3,000 more troops to the region.

Previous administrations weighed concerns about Iranian retaliation as they monitored Soleimani, who kept a low profile and traveled only to countries like Iraq where the Quds Force already had strong security.

Rep. Elissa Slotkin, a Democrat from Michigan and former CIA analyst who tracked Soleimani’s activities, said there was a “simple question” that prevented both the Bush and Obama administrations from targeting the Iranian leader.

“Was the strike worth the likely retaliation and the potential to pull us into a protracted conflict?” Slotkin said. “The two administrations I worked for both determined that the ultimate ends didn’t justify the means.”

Former Obama administration officials said discussions about taking out Soleimani never reached an operational phase. Beyond the risk of escalation with Iran, officials said they were uncertain that taking the Quds leader off the battlefield would have any impact on Tehran’s regional aggression or support for terror groups.

The Obama administration also worried that killing Soleimani would undercut diplomatic efforts to forge a nuclear deal with Iran, according to one official. The U.S. and five other nations signed a nuclear accord with Tehran in 2015, but Trump withdrew from the pact after taking office.

The officials insisted on anonymity in order to discuss internal national security deliberations.

The U.S. hasn’t been alone in monitoring Soleimani’s whereabouts over the years.

Israel, a staunch opponent of Iran, had followed the Quds commander as well, said Yoel Guzansky, an Iran expert at the Institute for National Security Studies in Tel Aviv.

Guzansky said Israel, a country with a sophisticated military backed by the U.S., could have also taken out Soleimani, but had held back because of concerns about retaliation.