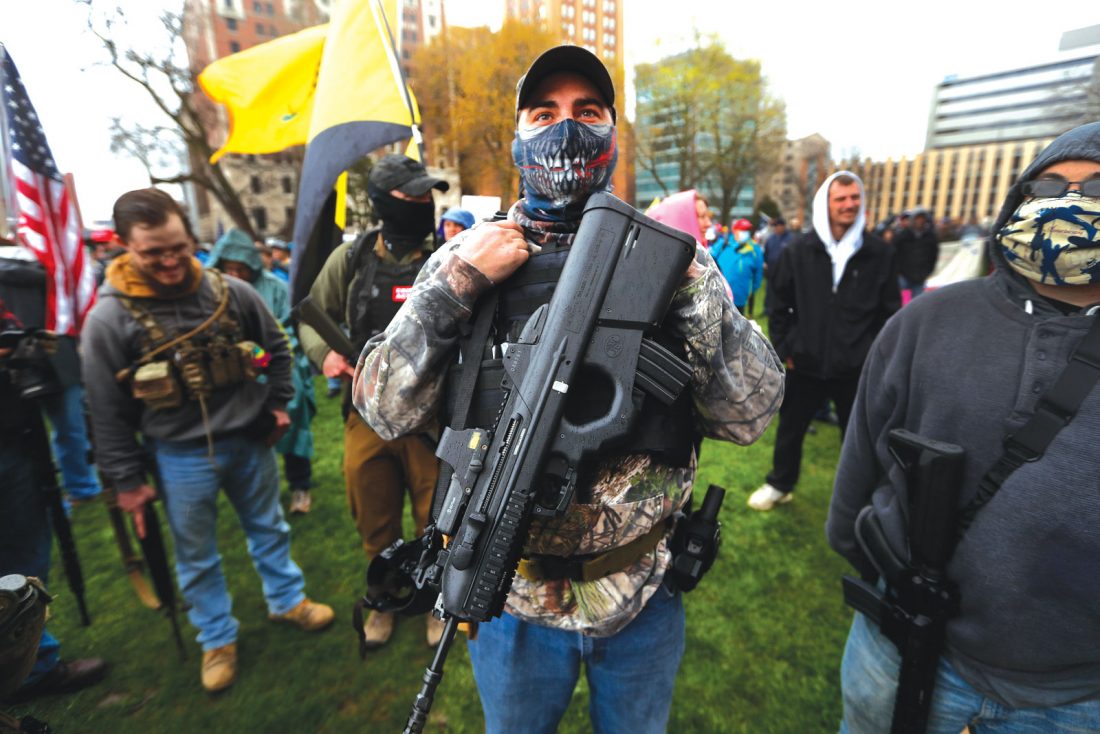 In this April 30, 2020, file photo, a protester carries his rifle at the State Capitol in Lansing. Michigan Attorney General Dana Nessel said Friday that a commission overseeing the state Capitol can legally ban guns from the building, contradicting panel leaders' contention that only the Legislature can do so. (AP photo)

LANSING, Mich. (AP) — A commission that oversees Michigan’s Capitol delayed a decision Monday on banning guns from the building before a planned protest against the governor’s coronavirus restrictions, in a meeting that later ended abruptly due to racist and threatening messages posted in Zoom.

The State Capitol Commission voted to form a subcommittee to seek input from the Legislature, which is controlled by Republicans, and Democratic Gov. Gretchen Whitmer, who has a ceremonial office in the Statehouse. The step — which was criticized by the governor and Democratic lawmakers — came less than two weeks after some lawmakers said they felt intimidated by armed demonstrators who entered the building openly carrying, including in a public gallery overlooking the Senate.

Another protest is scheduled for Thursday.

Commission members heard conflicting legal advice at their meeting. It ended early when “very racist and threatening” comments were made in a chat room function of the video-conferencing platform Zoom, which was how the public could participate, said panel spokesman and vice chairman John Truscott.

State Attorney General Dana Nessel, a Democrat, wrote a formal opinion stating the panel has authority to prohibit firearms in the building. Amy Shaw, a lawyer for the six-member commission who also works for a Republican senator, said it can only adopt rules and procedures related to the building’s upkeep.

“A public policy-making decision of this magnitude rests with the law-making body of the state: the Legislature,” she said, urging against a “hasty and unlawful decision” and recommending that the panel seek outside legal counsel.

House Minority Leader Christine Greig, a Democrat, said she was “appalled” by the commission’s decision to “shirk their responsibility. … With very real threats of the continued presence of assault-style weapons at future meetings of the Legislature, and numerous and many specific threats of violence against legislators and statewide officials, this matter is not resolved.”

Truscott, who was a top aide to a Republican former governor, said he personally does not like seeing guns in the Capitol but does not want the commission to overstep its bounds by relying on “people with political motivations to say one thing or the other.”

Thursday’s “Judgment Day” rally is being organized by Michigan United for Liberty, which recently sued to challenge Whitmer’s stay-at-home orders and other directives to limit the spread of COVID-19, which has contributed to nearly 4,600 deaths and infected at least 47,500. The nonprofit group said Monday that Facebook erased its private, not public, group on Sunday.

A Facebook spokesperson confirmed the group was removed for violating the social media company’s policies, specifically organizing a protest to defy government guidance on social distancing.

The Detroit Metro Times reported the move came after the newspaper had asked Facebook about people threatening violence against Whitmer and others on four private Facebook groups. Whitmer she said knows people are frustrated with her restrictions but added she was “very disappointed” the commission “didn’t take action to keep legislators safe.”

She said she was concerned about the safety of demonstrators who congregate without wearing masks.

“I’m increasingly concerned about the violent nature of the extreme comments that are being made around these organizations and groups that are coming together — the violent, racist, extreme rhetoric that has already been connected to Thursday’s rally,” said Whitmer, who called on GOP legislative leaders to denounce such threats.

House Speaker Lee Chatfield tweeted that “those making physical threats (to both parties) are out of line and should be punished. It’s despicable. It’s wrong. It needs to stop.” Senate Majority Leader Mike Shirkey previously denounced some of the protesters and their tactics.

Michigan law does not prohibit people from openly carrying a gun in public, except in places such as courts and airports. They can carry a concealed pistol with a permit unless in schools, day care centers and other specified places.