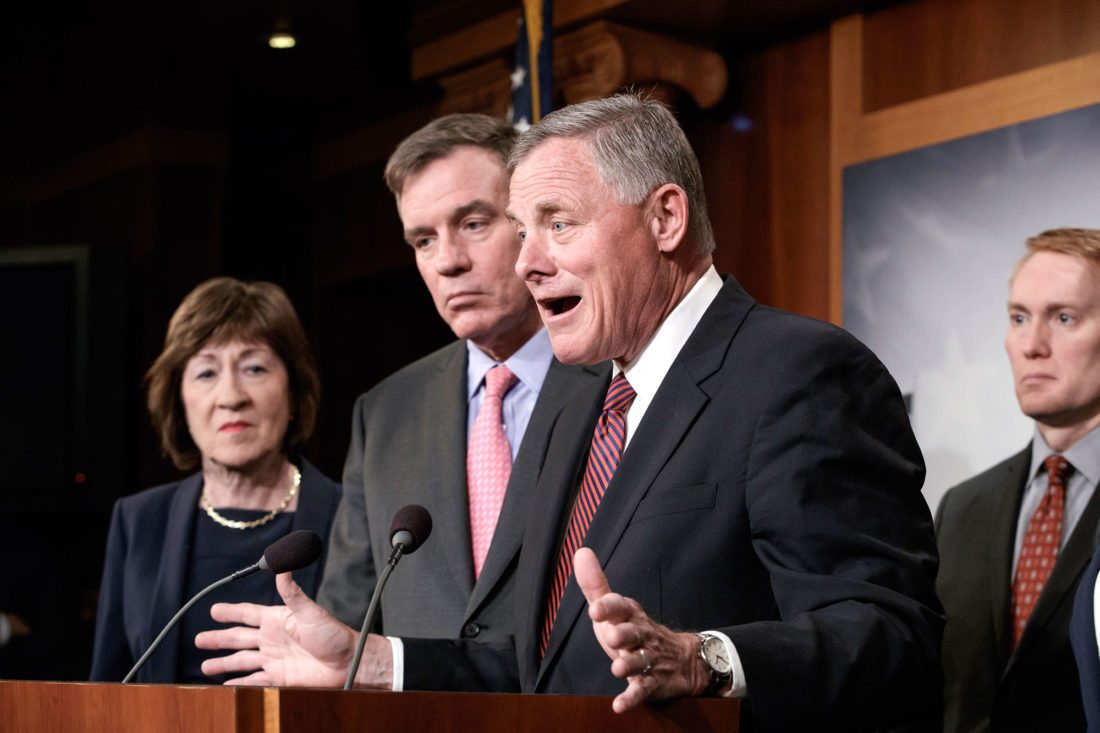 SENATE INTELLIGENCE COMMITTEE Chairman Sen. Richard Burr, R-N.C., center, joined, from left, by Sen. Susan Collins, R-Maine; Vice Chairman Mark Warner, D-Va.; and Sen. James Lankford, R-Okla.; previews some of the panel's recommendations for improving the nation's election infrastructure ahead of the 2018 midterm elections during a news conference Tuesday on Capitol Hill. Today, the committee will have a hearing examining attempted hacks on state elections systems in 2016 and the federal and state response to those efforts. (AP Photo/J. Scott Applewhite)

Federal warnings last time did not provide enough information or in some cases go to the right people in state and local governments, the committee’s leaders said, though they reiterated that there was no evidence votes were changed. Russian agents targeted election systems in 21 states ahead of the 2016 general election, the Homeland Security Department has said, and top U.S. intelligence officials have said they’ve seen indications Russian agents are preparing a new round of election interference this year.

The committee’s recommendations include urging states to make sure voting machines have paper audit trails and aren’t capable of being connected to the internet. Senators also are pushing for better communication among the various U.S. intelligence agencies and federal, state and local governments about cyber threats and vulnerabilities in computer systems.

The committee’s recommendations preview an election security report expected to be released in full in the coming weeks. It is the first of three reports the panel plans to write in its wide-ranging investigation into Russian meddling in the 2016 election.

Committee Chairman Richard Burr, R-N.C., and Virginia Sen. Mark Warner, the top Democrat on the panel, released the recommendations ahead of a Wednesday hearing examining attempted hacks on state election systems in 2016 and the federal and state response.

The proposals, in large part, echo those made by cybersecurity experts and address concerns raised by state and local officials. Even with Republican and Democratic support, it’s unclear if the recommendations will translate into legislation. Burr said his panel doesn’t have jurisdiction over the issues, so another committee would have to write any bills in Congress.

“While our investigation is still ongoing, one conclusion is clear: The Russians were relentless in attempting to meddle in the 2016 elections, and they will continue their efforts to undermine public confidence in Western democracies and in the legitimacy of our elections,” said Republican Sen. Susan Collins of Maine.

Burr said the committee’s investigation revealed that the Russian cyber effort exposed “some of the key gaps” in the security of the nation’s election infrastructure. He said the committee wants to maintain state control of elections, but the federal government should be doing more to help.

“Clearly we’ve got to get some standards in place that assure every state that at the end of the day they can certify their vote totals,” he said.

Senators are also urging state and local election officials to take advantage of resources provided by the Homeland Security Department, such as comprehensive risk assessments and remote cyberscanning of their networks to spot vulnerabilities. Overall, experts say far too little has been done to shore up those vulnerabilities in 10,000 U.S. voting jurisdictions that mostly run on obsolete and imperfectly secured technology.

As of last month, just 14 states had requested risk assessments and 30 had asked for remote cyberscans of their networks, according to Homeland Security officials. But even that was straining resources, since many of those risk assessments have not been completed.

Illinois, which is holding the second-in-the-nation primary on Tuesday, requested the assessment in late January but it’s not scheduled to be completed until after the primary.

The senators are also recommending that states consider implementing “more widespread, statistically sound audits of election results.” Currently, 32 states and the District of Columbia require postelection audits, with three others conducting such audits under some circumstances.

But cybersecurity experts say the best approach would be for states to require risk-limiting audits, a type of an audit that uses statistical methods and is considered a more rigorous process. So far, three states — Colorado, Rhode Island and Virginia — have passed legislation to require them.

Other states, including Georgia, are weighing legislation this year that would implement risk-limiting audits.

It’s unclear when the committee’s full report on election security will be released, but it is expected to include recommendations for elections officials around the country and also proposals for legislation to help ward off the hacking.

There’s no evidence that any hack in the November 2016 election affected election results, but the attempts scared state election officials who sought answers about how their systems had been potentially compromised. DHS took nearly a year to inform the affected states of hacking attempts or suspicious cyberactivity, blaming it in part on a lack of security clearances. Lawmakers in both parties have pressed the department on why it took so long.

Warner has said he thinks the process to prevent any compromise of election systems needs to be more robust, especially since President Donald Trump has not addressed the matter as an urgent problem.

“Every one of Mr. Trump’s appointees in law enforcement and national security acknowledge what an ongoing threat Russia is,” Warner said Tuesday. “It’s pretty amazing to me we’ve had the director of the FBI, the director of national intelligence and the head of the NSA say in public testimony within the last month that they’ve received no direction from the White House to make election security a priority.”

The Senate intelligence panel has put off making any assessments about whether Trump’s 2016 campaign in any way coordinated with Russia. Though that is one part of the panel’s investigation, Burr and Warner have decided to focus on less controversial issues where all members agree.

What to watch in impeachment trial

WASHINGTON (AP) — Senators like to float above messy politics in what's known by some as the dignified "upper ...

RICHMOND, Va. (AP) — Thousands of gun-rights activists from around the country rallied peacefully at the Virginia ...

“It is quite astonishing to see with what deadpan and neutral a tone our press and television report the open ...