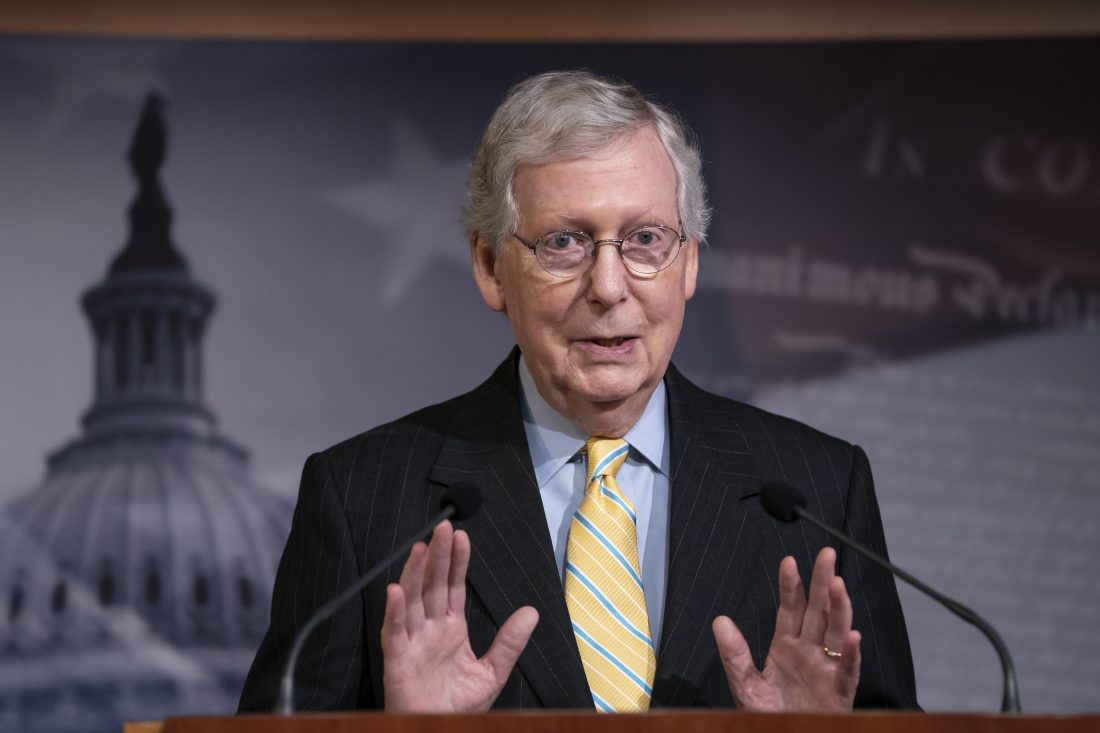 WASHINGTON (AP) — Senate Majority Leader Mitch McConnell calls himself the Grim Reaper — the one who holds the scythe leading to the chamber where the desires of Speaker Nancy Pelosi’s House majority go to die.

It is a role that can bring a pursed smile to his face. This week, he had many reasons to.

By week’s end, the typically understated Kentuckian was emoting over his unexpected star turn at the Democratic presidential debates as the candidates decried his prowess to mercilessly wield the power of “no.”

“A little quiz: Who won the Democratic presidential debate?” he asked the crowd at a gathering of religious conservatives.

“I did!” he exclaimed. “I dominated the Democratic debate last night.”

Rarely has a political figure pinned his fortunes on accomplishing so little. McConnell has made a career out of stopping things — first Barack Obama’s agenda (underscored by his unsuccessful vow to make him a “one-term” president), now Pelosi’s — taking pride in what has come to be known as the Senate graveyard.

He has also made a virtue of saying yes in one fundamentally important respect where the Senate has sole authority: the confirmation of judges. Both he and Trump constantly remind conservative audiences the president has remade the federal judiciary with dozens of judges, and none so important as Supreme Court Justices Neil Gorsuch and Brett Kavanaugh.

That strategy will be put to a fresh test in 2020, when McConnell will seek a seventh term, on the same ballot with Trump. McConnell is not nearly as popular as the president is at home in Kentucky. But part of his pitch will be what he can do to help Trump by stopping Democratic bills from reaching the White House.

Along the way, he has infuriated Democrats and will be an animating force on both sides during the campaign. Democrats will try to raise money based on opposition to him and are hopeful that he will have a strong challenger, possibly Amy McGrath, who narrowly lost a House race in Kentucky in 2018.

His prominence was clear on the first night of the Democratic presidential debate, when the moderator asked the candidates directly, “Do you have a plan to deal with Mitch McConnell?”

Elizabeth Warren, the senator from Massachusetts, said she certainly did. “You better understand the fight still goes on,” said Warren, the senator who drew McConnell’s ire two years ago when he couldn’t get her to stop talking on the Senate floor and complained: “She persisted.”

The others were similarly questioned. “Is President Booker going to get his bills on the floor with Senator McConnell?” New Jersey Sen. Cory Booker noted his own ability to work across the aisle. Jay Inslee, the Washington governor, suggested the best way to deal with McConnell was to take away the Senate’s filibuster — the legislative tool that allows a single senator to hold up legislation.

It was all quite exhilarating to McConnell, who said he was watching the baseball game, not the debates, but heard about his mentions, strongly suggesting he may have been paying closer attention than he let on.

“I was thrilled to dominate the discussion,” McConnell told reporters the next day.

“I understand my sin is that I’ve been stopping left wing agenda items coming out of the House and confirming strict constitutionalists to the Supreme Court,” McConnell said.

“I think that was a legitimate discussion to have,” he said. “And I couldn’t have been happier about it.”

To be sure, McConnell ended the week with accomplishments in the yes column. Congress gave final passage to the $4.6 billion border package to provide relief amid the migrant crisis, as Trump wanted. The Senate confirmed 11 more judges and approved an annual Defense bill. One of McConnell’s home-state priorities, to raise the legal age for tobacco purchases from 18 to 21, sailed through a committee.

But so many priorities from the Democratic-controlled House — popular bills to beef up gun controls, voting rights, deportation relief for young immigrants — are sitting in the Senate with no votes in sight.

At one point during night two of the presidential debates, Joe Biden talked about his work across the aisle with McConnell. They secured a deal on a large package of taxes and spending cuts that averted a fiscal crisis when he was Obama’s vice president.

But even that nod to bipartisanship from days past drew blowback from the other candidates. Michael Bennet, the senator from Colorado, called it great for McConnell but a “terrible deal for America.”

Said Bennet, “Gridlock will not magically disappear as long as Mitch McConnell is there.”

CARSON CITY, Nev. (AP) — With the Nevada caucuses less than a week away, Democratic presidential candidates ...

Sanders not doing so hot

Bernie Sanders was supposed to run away with the New Hampshire primary. This is his kind of state, where Democrats ...