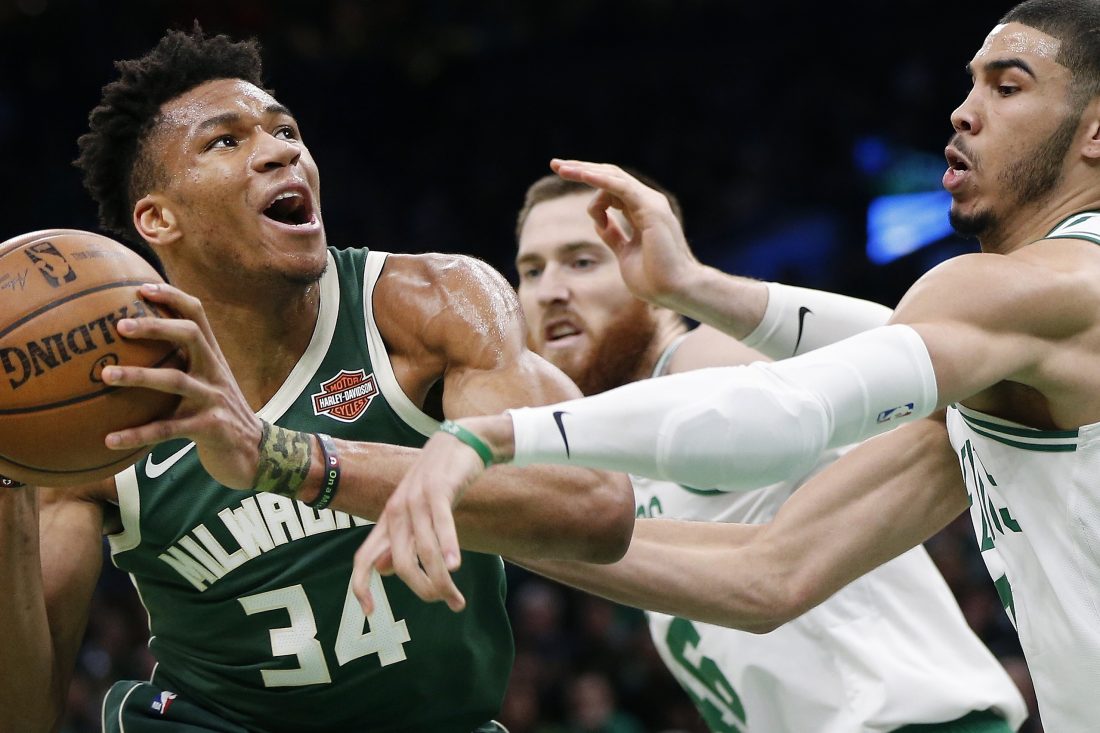 Boston Celtics' Jayson Tatum, right, and Aron Baynes, behind, double-team Milwaukee Bucks' Giannis Antetokounmpo (34) during Game 3 of a second round playoff series in Boston on Friday, May 3, 2019. (AP Photo/Michael Dwyer)

The scenario is simple right now for Milwaukee and Golden State: Win a road game on Monday, go home toting a 3-1 series lead and be one win away from a spot in the NBA’s version of the Final Four.

The scenario is equally simple for Boston and Houston: Win a home game on Monday, or else.

Top-seeded Milwaukee leads fourth-seeded Boston 2-1 in their Eastern Conference semifinal series, and top-seeded Golden State leads fourth-seeded Houston 2-1 in their Western Conference semifinal. The Celtics and the Rockets host Game 4s, knowing a win will earn them a berth in what becomes a best-of-three showdown and knowing a loss places them squarely on the abyss that overlooks elimination.

Boston had the home-court edge over Milwaukee, then gave it back with a loss on Friday night. Houston was a bounce or two away from getting into the most-dreaded 3-0 hole against Golden State, then rallied to win Game 3 on Saturday night and keep realistic hope alive against the two-time defending NBA champions.

“Every game is a must win for us, and we have to play like that,” said Houston’s P.J. Tucker, who made a slew of key effort plays to help the Rockets survive Game 3. “Every single possession, we have to fight for the ball, fight for everything the entire game.”

The Celtics and Warriors are going to be looking for more from their star guards in Game 4.

Boston’s Kyrie Irving was 8 for 22 from the floor in the Celtics’ Game 3 loss. Golden State’s Stephen Curry — playing with fingers taped together on his left hand following a dislocation of his middle finger — was 7 for 23 in the Warriors’ Game 3 loss, and was almost universally mocked on social media after missing a dunk in the final seconds.

“I want to shoot the ball better, and that’s going to happen,” Curry said.

A big boost for Boston could come from Marcus Smart, who hasn’t played in a month and has yet to appear in these playoffs after a left oblique tear. Smart practiced on Sunday and has been cleared for contact, though no determination for his Game 4 availability has been officially made.

A look at Monday’s games:

NEED TO KNOW: The Bucks are 3-0 on the road in the playoffs and have averaged 123 points in those games — plus are shooting 51 percent away from home, the best in the league so far in the postseason. Giannis Antetokounmpo was his typical brilliant self in Game 3, finishing with 32 points, 13 rebounds and eight assists.

INJURY WATCH: Smart being close is obviously a good sign for the Celtics. Milwaukee will still be without Malcolm Brogdon in Game 4, just as it has throughout the entirety of these playoffs, but he’s also getting close to a return.

KEEP AN EYE ON: Irving. He got to the foul line 12 times in Game 3, which was a plus for Boston, but he’s still shooting just 30% (12 for 40) in his last two games. He’s played in three consecutive postseason losses only once, and the Celtics need it to stay that way.

PRESSURE IS ON: Perhaps oddly, the Bucks. Even though they have the likely MVP, the No. 1 overall seed in the playoffs and the home-court edge regardless of Monday’s result, a best-of-three against Irving, Al Horford, Jayson Tatum and Stevens — particularly if Smart comes back — should be avoided if at all possible.

NEED TO KNOW: The Warriors expect Curry to bounce back after struggling in Game 3. “He’s just really competitive and he gets locked in and he gets a little big angry and he comes out with a lot of focus and a lot of fight,” coach Steve Kerr said.

INJURY WATCH: Houston reserve Danuel House, who missed Saturday’s game, is questionable for Game 4 because of a toe injury. For the Warriors, Kerr said Saturday that Damian Jones, who tore a pectoral muscle in the beginning of December, might be cleared for contact practices next week and could return if the Warriors advance. Kerr added that center DeMarcus Cousins, who injured a quadriceps muscle in the first round, has made marked progress and could also play this postseason. “He’s come a pretty long way,” Kerr said.

KEEP AN EYE ON: The first quarter. The Warriors outscored Houston 57-39 combined in the first quarters of Games 1 and 2 to take a 2-0 lead in the series. The Rockets fared better in Saturday’s win and they trailed by a single point at the end of a first quarter where Eric Gordon scored seven points and Clint Capela added six.

PRESSURE IS ON: James Harden. Last year’s MVP has led the Rockets in scoring in each game of the series, capped by Saturday’s 41-point performance, but will need to keep it up if the Rockets hope to even the series before heading back to California for Game 5. Harden has been plagued by criticism in the playoffs in the past few years as Houston has been unable to get past the Warriors, losing to them in the postseason in three of the last four seasons.