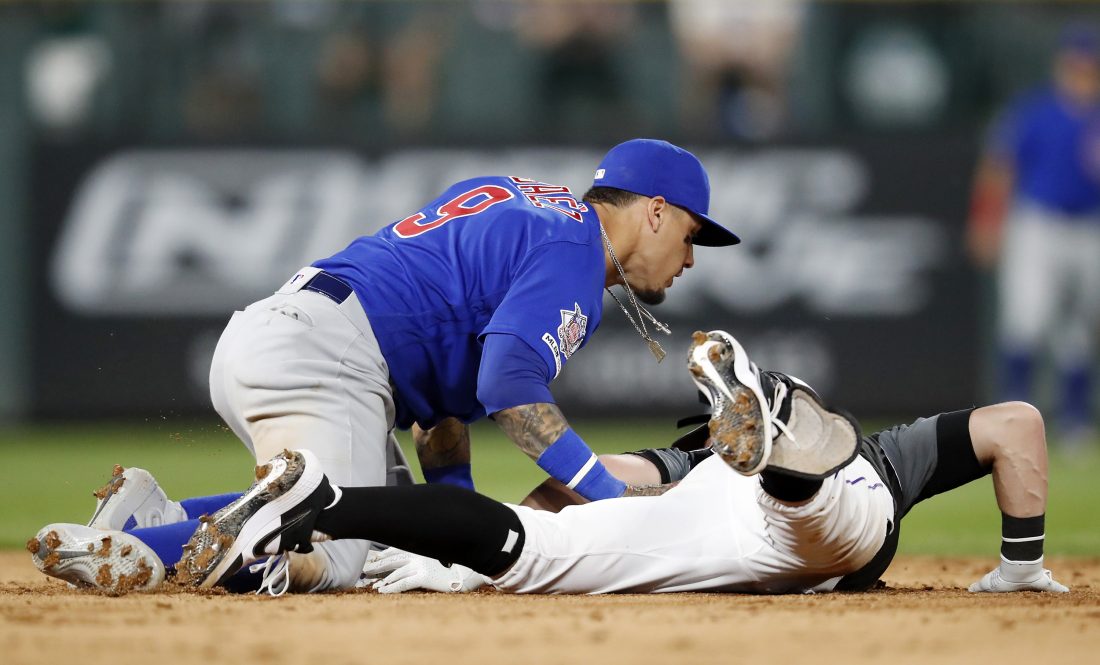 Chicago Cubs shortstop Javier Baez, left, tags out Colorado Rockies' Ryan McMahon as he slides into second base while trying to stretch his RBI-single into a double in the eighth inning on Monday, June 10, 2019, in Denver. The Rockies won 6-5. (AP Photo/David Zalubowski)

DENVER (AP) — Ian Desmond hit a monster blast that brought fans to their feet but it was a manufactured run that made the difference for the Colorado Rockies.

Colorado scored its first five runs on homers — including Desmond’s 486-foot rocket — but Ryan McMahon delivered the go-ahead run with a single in the eighth inning, and Colorado rallied to beat the Chicago Cubs 6-5 on Monday night.

Nolan Arenado and Charlie Blackmon also went deep for the Rockies, who have won nine straight at home, but Desmond’s shot onto the concourse got everyone’s attention.

“Some of us were in awe. He walloped that one pretty good,” Daniel Murphy said. “It was a good swing, good at-bat, and a big swing for us, too.”

Anthony Rizzo, Kyle Schwarber and David Bote homered for the Cubs. Bote, who grew up in Longmont, Colo., outside of Denver and made his major league debut at Coors Field in 2018, hit his first homer in Colorado.

“Coming back this summer was a little bit more enjoyable than last year,” he said. “My debut wasn’t successful.”

The game was tied 5-all when Murphy doubled and stole third with one out in the eighth. McMahon drove him in with a single to right-center off of Steve Cishek (1-3).

“(Murphy) was causing havoc out there so maybe Cishek was thinking about him a little bit at third, probably afraid to bounce something, trying to be a little more perfect with his pitches,” McMahon said. “Got me something to hit”.

Wade Davis got the final three outs for his eighth save and first since coming off the 10-day injured list on Friday.

The teams used the long ball to put up four runs each in the third inning. Bote and Schwarber went back-to-back on consecutive pitches to score the first two, and Rizzo hit a two-run homer to center to give Chicago a 4-0 lead. Rizzo finished with three hits.

Blackmon and Arenado each had a two-run homer off Yu Darvish in the bottom of the inning to tie it. Desmond gave the Rockies a 5-4 lead with his mammoth pinch-hit homer in the seventh that hit a restaurant on one bounce on the concourse. It is the longest home run in the majors this year, according to Statcast.

“As long as it goes over the fence I don’t care how far it goes,” Desmond said.

The Cubs tied it in the eighth on Javier Baez’s groundout off Scott Oberg (4-0) before the Rockies answered in the bottom of the inning.

“It was there for us, we just could not finish it up,” Chicago manager Joe Maddon said.

Cubs: 3B Kris Bryant rolled his ankle against St. Louis on Sunday but was in the lineup.

Rockies: Colorado placed RHP Seunghwan Oh on the 10-day injured with a left abdominal strain, retroactive to Friday, and purchased the contract of LHP Phillip Diehl from Triple-A Albuquerque.

Chicago outfielder Carlos Gonzalez made his first appearance at Coors Field in a different uniform. Gonzalez played 10 seasons with the Rockies, becoming a free agent after last season. He signed with the Cubs on June 1 after hitting .210 in 30 games with Cleveland.

His return to Colorado was bittersweet for the three-time All-Star and 2010 NL batting champ.

“Obviously, this is home for me,” he said before the game. “I got a lot of memories of this place. It is what it is. I’m now on the other side.”

Colorado honored him with a video before the game and the fans gave him a 30-second standing ovation when he came to the plate in the second inning. Rockies players joined in the ovation.

Gonzalez, who was 0 for 3 with a walk Monday, made his Cubs debut against the Rockies in Chicago last week, two days after signing with the club.

“I was home waiting for a job and the next thing I know I’m playing couple of games in Triple-A and hours later playing against my ex-teammates,” he said. “It was great seeing them competing against each other.”

Colorado rookie right-hander Peter Lambert (1-0, 1.29 ERA) makes his Coors Field debut on Tuesday night, five days after winning his first major league start when he beat the Cubs. Chicago left-hander Jose Quintana (4-5, 3.77) took the loss in that game and is on the mound for his fourth career start at Colorado.