Hundreds of balls found in Lake Michigan from golf course 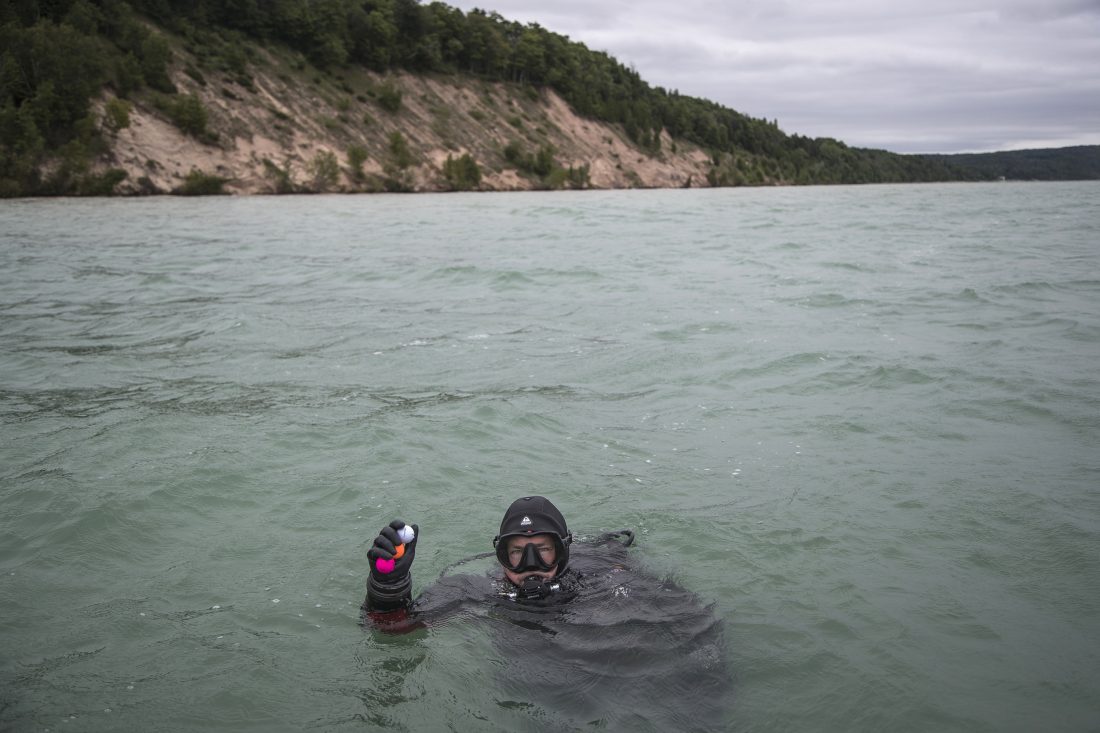 Diver Chris Roxburgh of Traverse City picks up some golf balls on July 11 from Lake Michigan where ball have been teed from Arcadia Bluffs Golf Club's 12th tee box near Arcadia Township. The golf club has changed its website to no longer encourage players to hit balls into Lake Michigan after a diver hired by a newspaper found hundreds in the water. (Junfu Han/Detroit Free Press via AP)

ARCADIA, Mich. (AP) — An exclusive golf course in northern Michigan has changed its website to no longer encourage players to hit balls into Lake Michigan after a diver hired by a newspaper found hundreds in the water.

State environmental regulators said they’re investigating what has occurred at Arcadia Bluffs, where a round of golf on the course overlooking the northeastern shore of the lake costs $215 during the peak summer season. A beverage cart employee said she was fired for discouraging players from hitting balls into the lake.

Experts say golf balls are made of plastic and rubber and eventually will break down in Lake Michigan. The Detroit Free Press said it hired diver Chris Roxburgh to check the water beyond the 12th tee, which overlooks the lake. The newspaper said he found at least 200 balls within about an hour, some looking new and others covered in algae.

A description of the 12th hole on the Arcadia Bluffs website used to encourage golfers to hit a ball into the water before striking a tee shot by saying: “Go ahead and do it, everyone does.” The newspaper said that was dropped from the website last week.

“Thank you for drawing our attention to this outdated reference,” Arcadia Bluffs president William Shriver told the Free Press. “We certainly do not want to encourage the practice of hitting golf balls into Lake Michigan.”

He said there had been a sign at the 12th tee discouraging golfers from hitting balls into the lake, but the sign had the opposite effect.

“The vast majority of our guests do not hit golf balls into Lake Michigan,” Shriver said. “By not drawing attention to the issue, we believe that the incidents of hitting balls into the lake have decreased. We take our environmental responsibilities seriously.”

Separately, Sara Padden, who sold beverages from a cart at No. 12, said she was fired in June after telling golfers that hitting balls into the lake would harm the environment. Arcadia Bluffs said it wouldn’t comment on a personnel matter.

“A lot of guys will bring old balls that they don’t play, specifically for that purpose, just whacking them into Lake Michigan,” Padden told the Free Press.