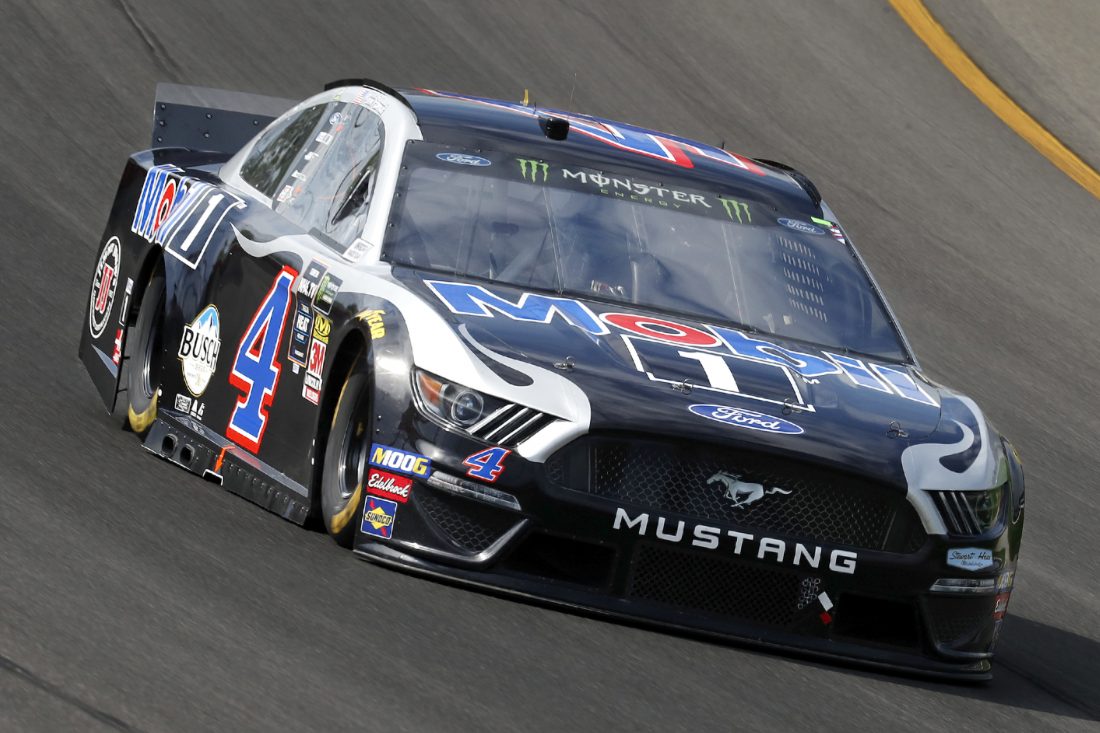 Kevin Harvick races out of turn one during a NASCAR Cup Series race at Michigan International Speedway in Brooklyn, Mich., on Sunday, Aug. 11, 2019. (AP Photo/Paul Sancya)

BROOKLYN, Mich. (AP) — Kevin Harvick is so confident in his talent and team he doesn’t get excited when he wins.

He raced to the 47th NASCAR Cup victory of his career and his second in less than a month Sunday, pulling away from the pack to win at Michigan International Speedway for the second straight year.

With just three races before the playoffs, the timing of his latest strong performance may help him win a second championship.

“Hopefully, we’re peaking at the right time,” he said.

Late in the race, the Stewart-Haas Racing driver created a cushion between his Ford and the competition and finished more than a second ahead of Denny Hamlin.

“Nothing I could really do,” said Hamlin, who drove a Toyota-powered car for Joe Gibbs Racing. “Didn’t have enough speed.”

Kyle Larson was third, more than 16 seconds behind Harvick. He was followed by Martin Truex Jr., Daniel Suarez and points-leader Kyle Busch.

Seven-time champion Jimmie Johnson will have to close the regular season strong to extend his streak of earning a spot in every postseason since the format was created 15 years ago. He started the race tied for the 16th and final spot in the playoffs and slipped to 18th. Johnson had an early setback, making contact with a wall on Lap 15 that damaged his right rear quarter panel and tire, and finished 34th.

Johnson was several laps back for much of the race, but got a break potentially in the playoff race when Clint Bowyer was knocked out of the race after Paul Menard appeared to bump him. Bowyer began the day 15th in the playoff standings and finished 37th at MIS, putting him in 16th in the race for the final spot.

Ryan Newman, who started the day tied with Johnson in the playoff standings , was 12th in the 38-car field and that was good enough to move him up to 15th.

Pole-sitter Brad Keselowski was 19th, extending his winless streak to 21 at the track about 70 miles from his hometown in suburban Detroit. Keselowski got off to a strong start and led for a race-high 66 laps, but a flat tire during the second stage set off sparks behind him and was a setback he couldn’t overcome.

Joey Logano won at Michigan in June, helping Ford win four straight at the track and bragging rights over Chevrolet and Toyota in a state where the manufactures have a big presence.

Harvick also won at New Hampshire Motor Speedway last month, giving him two wins in a four-race stretch. He finished sixth and seventh between the victories.

“We still have to get a lot better, but we’re in better shape than we were,” crew chief Rodney Childers said.

Johnson finished 30th or worse for the third time in five races and in the other two, he was 15th and 19th, putting his postseason chances in peril.

“The guys around that cutoff point all seem to be having bad luck,” he said.

Harvick said he has been driving with an injured shoulder, hurting it while throwing a nerf ball. Harvick said he couldn’t lift his arm in June at Sonoma Raceway, but estimated his shoulder is 80% healthy.