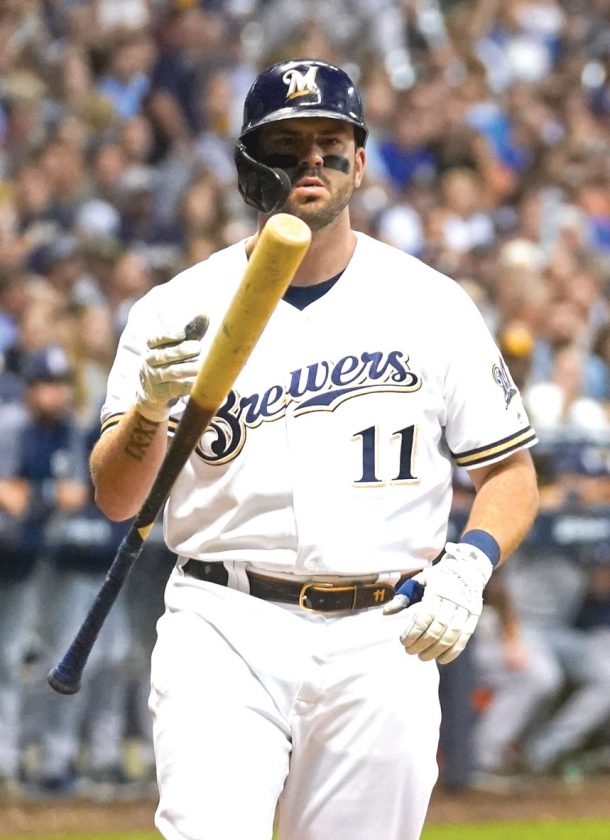 AP Photo Milwaukee’s Mike Moustakas flips his bat after striking out during the third inning against the San Diego Padres Wednesday.

MILWAUKEE (AP) — Since losing Christian Yelich for the season, the Milwaukee Brewers stepped up their push for the playoffs, winning six of their first seven games without the reigning NL MVP.

But in a 2-1 loss to the San Diego Padres on Wednesday night, the Brewers were stymied by right-hander Dinelson Lamet, who struck out a career-high 14 and held them to three hits in six innings.

Milwaukee remains tied with Chicago for the second NL wild-card spot after the Cubs lost to the Reds 3-2 in extra innings.

Kirby Yates fanned pinch-hitter Ryan Braun with a runner on second base to close out the win.

Yates took over took to begin the ninth and walked Eric Thames to start the inning. With one out, pinch-runner Tyrone Taylor strayed too far off first base on a popup to shallow left and nearly got doubled off, but was hit in the back by Mejias-Brean’s throw. Taylor went to second on the throwing error, and was stranded when Yates struck out Braun for his major league-leading 41st save.

The Brewers appeared to score the tying run on a fluke play with two outs in the seventh inning, but it was not allowed. With Cory Spangenberg on third base, Trent Grisham swung and missed at a third strike that wasn’t caught cleanly. Grisham was called safe when first baseman Eric Hosmer dropped the throw from catcher Francisco Mejia, with Spangenberg crossing the plate.

But after a discussion among the umpires, it was ruled Grisham had kicked the ball, inadvertently, on his way to first and that made it a dead ball and a strikeout.