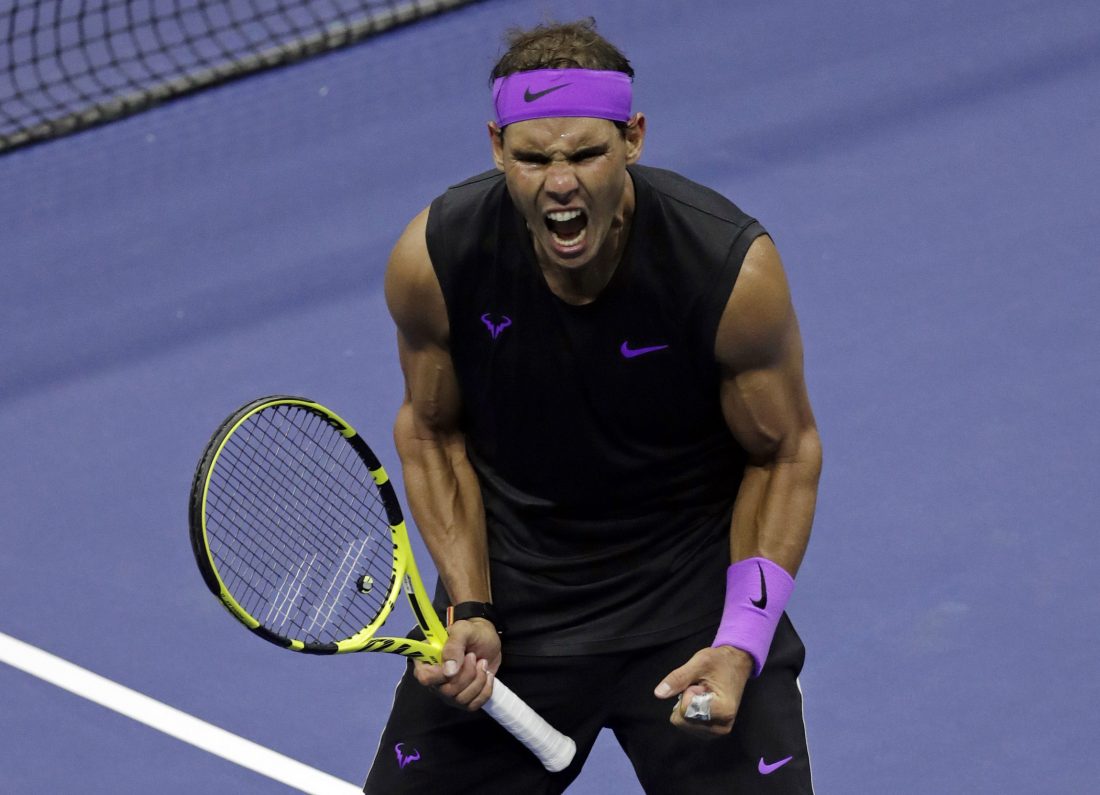 NEW YORK (AP) — Rafael Nadal kept pulling away in his U.S. Open quarterfinal, then getting reeled back in by Diego Schwartzman.

Took more than two hours just for those two sets. Eventually, both were claimed by Nadal. And so, ultimately, was the match and a berth in a 33rd Grand Slam semifinal for Nadal, who prevented Schwartzman from reaching his first by winning 6-4, 7-5, 6-2 after 12:30 a.m. Thursday in Arthur Ashe Stadium.

“Like a lion in the … jungle. He’s big. He’s a fighter. He knows how to play the important moments, every single time,” Schwartzman said. “I’ve played him eight times and every important moment, he played better than me.”

No wonder Nadal is 8-0 against the guy.

Roger Federer and Novak Djokovic are both out of the bracket, but Nadal is still around, meaning at least one member of the Big Three is in the semis at a 62nd consecutive major tournament. That trio has combined to win the last 11 Slam trophies — and Nadal is going to be heavily favored to make that 12.

None of the other men left has played in a major final, let alone won one. Nadal, though, is closing in on a fourth championship at the U.S. Open and his 19th at all majors, which would move him within only one of Federer’s record for men.

The other men’s semifinal will be No. 5 Daniil Medvedev of Russia vs. 78th-ranked Grigor Dimitrov of Bulgaria.

In the women’s semifinals Thursday, Serena Williams meets No. 5 Elina Svitolina of Ukraine, and No. 13 Belinda Bencic of Switzerland takes on No. 15 Bianca Andreescu of Canada.

Dimitrov won a five-setter Tuesday night against Federer, who was hampered by an issue with his upper back. Medvedev won his quarterfinal in four sets against Stan Wawrinka, who had built a big lead in the fourth round against Djokovic when the defending champion stopped because of pain in his left shoulder.

A year ago, it was Nadal whose body broke down: He retired from his semifinal against runner-up Juan Martin del Potro because of a bad knee.

This time, on a muggy night with the humidity above 50%, the left-hander raised some concern by having a trainer come out to rub a cream into that forearm during a changeover early in the third set. At the next changeover, Nadal flexed his right forearm and was visited again by the trainer, took a salt pill and guzzled some drinks, then shook that arm between points in the following game.

Afterward, Nadal said he had dealt with cramps late in the second set and early in the third.

“And then I took some salt, that’s all, and then it was over. The body is in good shape, I think. Not big problems,” Nadal said. “Just, of course, a little tired. Long day.”

Still, Nadal managed to play his best when it mattered the most against the 20th-seeded Schwartzman, an Argentine serenaded by loud choruses of “Ole! Ole! Ole! Ole!” by an audience that included former San Antonio Spurs star Manu Ginobili.

Nadal came up with a service break in the last game of each of the opening two sets, then the last one he would need made it 4-2 in the third and he broke yet again to end it.