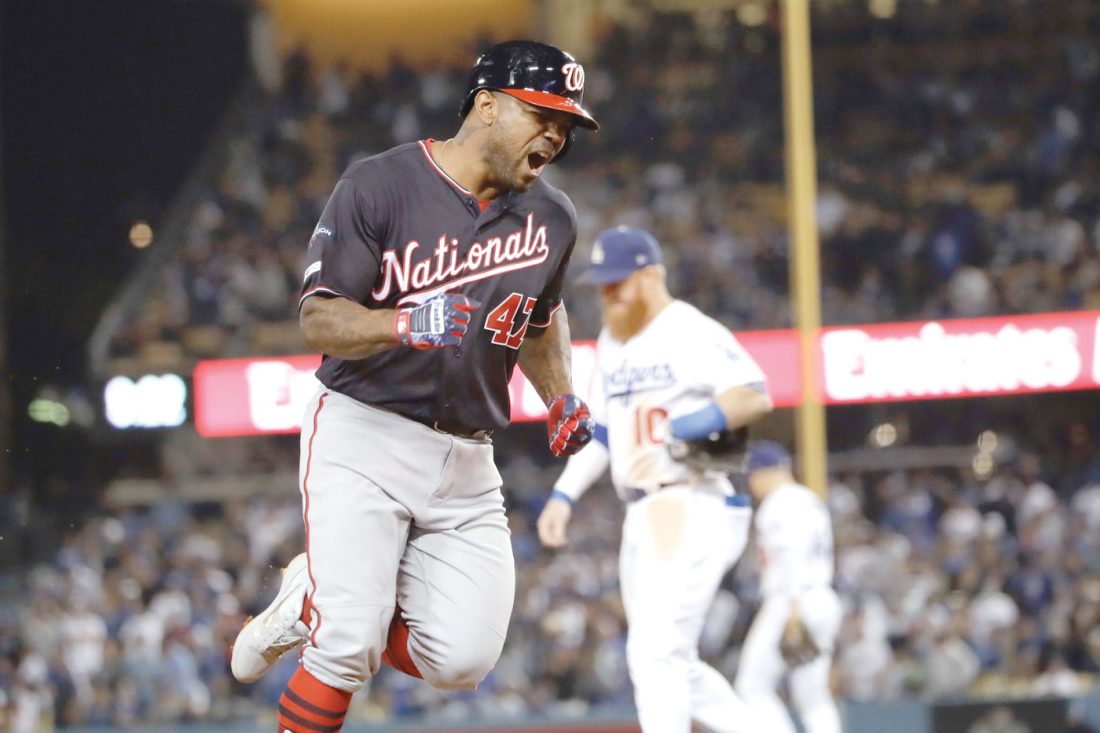 AP Photo WASHINGTON’S HOWIE KENDRICK celebrates after a grand slam against the Los Angeles Dodgers during the 10th inning Wednesday.

LOS ANGELES (AP) — Howie Kendrick and the Washington Nationals got down again but were never out — and they finally ended their streak of playoff series futility in grand fashion.

Kendrick hit a tiebreaking grand slam in the 10th inning and the Nationals, boosted by a lightning rally against Clayton Kershaw, beat the Los Angeles Dodgers 7-3 Wednesday night in Game 5. They advanced to the NL Championship Series starting Friday at St. Louis.

“I was hoping for any moment,” said Kendrick, a 36-year-old veteran who was hitless in his first four at-bats.

In their first season since star slugger Bryce Harper left as a free agent, the Nationals became the first team in major league history to rally from three or more runs down twice in elimination games during the same postseason.

The wild-card Nationals won a playoff series for the first time since the team moved to Washington ahead of the 2005 season, and the franchise reached the NLCS for the second time in 51 seasons. The Nationals overcame a 19-31 start, finished 93-69 and then rallied from a 3-1, eighth-inning deficit to beat Milwaukee 4-3 in the NL wild-card game.

Then they bounced back from down 2-1 in the series against the Dodgers, who set a team record with 106 regular-season wins.

Rendon and Soto homered on consecutive pitches to overcome a 3-1 deficit in the eighth against Kershaw, a three-time Cy Young Award winner. Soto had started the comeback from a 3-0 hole with an RBI single in the sixth off starter Walker Buehler and then hit a 449-foot drive halfway up the right-field pavilion off Kershaw, the longest home run of the 20-year-old’s big league career.

Adam Eaton walked against Joe Kelly leading off the 10th, Rendon doubled on a drive that lodged in the left-field wall and Soto was intentionally walked.

Kendrick was 4 for 19 with one RBI in the series and had made a pair of errors at first base in the Game 1 loss. He fouled off a pitch and then hit a 97 mph fastball over the wall in dead center for his second career slam. The other was a game-ending, 11th-inning drive against San Francisco in August 2017. Cody Bellinger chased the ball all the way to the wall, putting his arms up against the fence as he ran out of room.

“It was electric. Probably the best moment of my career,” said Kendrick, a 14-year big league veteran who played for the Dodgers and Los Angeles Angels. “We never gave up. The city had faith in us. The fans had faith in us. We believed in ourselves, everybody came through for us.”

Dodgers fans started exiting as the bases emptied, realizing their team’s streak of NLCS appearances would not reach four.