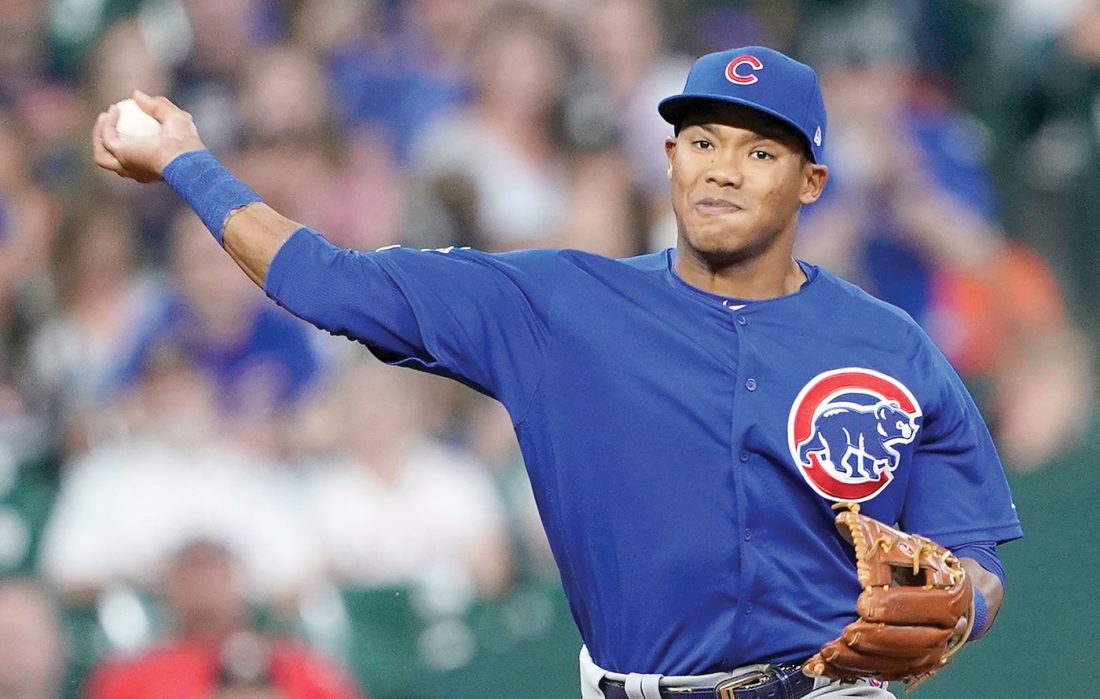 AP Photo Shortstop Addison Russell throws to first against the Houston Astros last season. The Cubs failed to offer a 2020 contract to Russell on Monday, making the 2016 All-Star a free agent one year after he was suspended for violating Major League Baseball’s domestic violence policy.

Ahead of the deadline to offer 2020 contracts to unsigned players on 40-man rosters, San Diego obtained second baseman Jurickson Profar from Oakland for catching prospect Austin Allen, then agreed to a $5.7 million, one-year contract. Cleveland acquired catcher Sandy Leon from Boston for minor league right-hander Adenys Bautista and agreed to a $2 million deal.

About two dozen players agreed to contracts, and the total of players eligible for arbitration dropped from about 230 at the start of the day to approximately 165.

Seattle chose not to offer a contract to infielder Tim Beckham, who has 32 games remaining on a drug suspension, and San Francisco let go outfielder Kevin Pillar.

Baltimore jettisoned its top player in Villar in exchange for minor league pitcher Easton Lucas. Villar played in all 162 games this year and led the 108-loss Orioles with 176 hits, five triples and 40 stolen bases. He likely will command a salary of about $10 million in arbitration.

“He was a tremendously exciting player for us, a joy to have,” Orioles general manager Mike Elias said. “It was hard to let him go, but we’ve got to keep an eye on our strategic objectives, which is prioritize the future right now.”

Russell, a 2016 All-Star, was banned for 40 games last offseason under Major League Baseball’s domestic violence policy after a series of allegations made by ex-wife Melisa Reidy. The 25-year-old returned to the Chicago Cubs in May and batted a career-low .237 with nine homers, 23 RBIs and a .699 OPS.

Russell earned $4 million in 2019 and was likely to gain a raise in arbitration, probably to around $5 million.

“We decided to non-tender Addison Russell today simply because the role we expected him to play for the 2020 Cubs was inconsistent with how he would have been treated in the salary arbitration process,” Cubs president of baseball operations Theo Epstein said in a statement.

Sanchez, a 27-year-old right-hander, was an All-Star for Toronto in 2016 and was dealt to Houston on July 31. He went 2-0 in four starts and 18 2/3 innings, including the first six innings of a combined no-hitter against Seattle in his Astros debut. But the team said on Sept. 5 that he needed shoulder surgery.