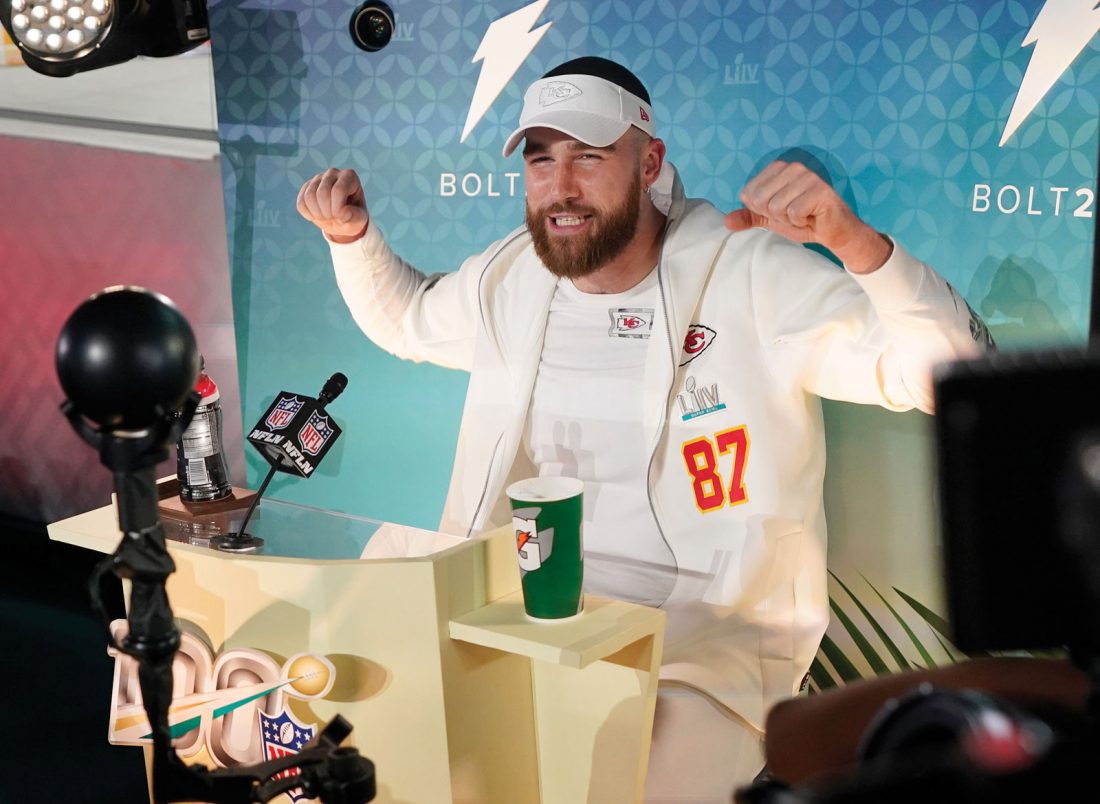 MIAMI (AP) — They’ve got swagger, style and lots and lots of catches.

Kansas City’s Travis Kelce and San Francisco’s George Kittle are talkative tight ends at this year’s Super Bowl and among the most entertaining personalities in the NFL — Rob Gronkowski-types who could play big roles in who wins the big game Sunday.

“I just love to live life, man,” Kelce said with a big smile. “And I like to enjoy happiness along the way.”

That comes from a guy whose silly, entertaining, ridiculous, hilarious — or, all of the above — dances to celebrate his touchdowns instantly go viral moments after he gets into the end zone.

The 6-foot-5, 260-pound Kelce has “Hit the Quan” and done “The Chicken Head” and everything in between. He’s the life of a football party that has moved to the NFL’s biggest stage — and with a worldwide audience watching.

“I just think any time he gets the ball in the end zone, I ask him all the time, ‘How do you come up with these dances, man? Just how do you come up with all this stuff?'” said Chiefs offensive tackle Eric Fisher, who was fined $14,037 for dumping two beers on himself while celebrating a touchdown in Kansas City’s divisional round win over Houston.

“I don’t know, man,” Fisher added. “I think his touchdown celebrations are one of a kind and will go down in history.”

Kelce is also doing a pretty good job of getting himself into the record books with his play.

He holds the NFL record for the most seasons by a tight end with 1,000 or more yards receiving with four, and counting. Kelce is a favorite target of Patrick Mahomes and established himself as possibly the best all-around tight end in the game.

“Kelce’s a beast,” Chiefs wide receiver Tyreek Hill said. “He’s special. I’ve never seen a guy that size to have that much ability or to carry that kind of swagger. He’s definitely a leader.”

The 49ers say the same of the playmaking Kittle, who was selected a first-team All-Pro this season. The third-year tight end has had 85 catches or more and 1,000 yards receiving in each of his past two years.

Kittle is a fun-loving character whose approach to the game mimics that of a playful professional wrestler. After all, his nickname is “Stone Cold Kittle” — after “Stone Cold” Steve Austin.

He even uses a gesture to celebrate first downs that he borrowed from Pentagón Jr., a Mexican wrestler. He makes a circle with his thumb and forefinger to form a “0” and then flicks his wrist so his other fingers form an “M” for Pentagon Jr.’s catch phrase: “Cero miedo,” which means, “zero fear.”

“I think we’re all a little different, but he’s unique and you see it on the field,” 49ers coach Kyle Shanahan said. “He has a personality where he goes 100 mph in whatever he does. That’s probably why he’s going to have a WWE career after this. What’s cool is that’s kind of who he is and then you see it on the field. That’s why whether he does perfect or not, he always makes plays with his attitude when the ball is in his hands.”

That all started when Kittle was in college at Iowa, where then-tight ends coach Levar Woods gave him homework. The assignment: Watch videos of the best players at the position and take anything he can use to add to his game.

Kittle couldn’t stop looking at film of Kelce, filling his iPad with film of the Chiefs star.

Every play, every game.

“Whether it’s what he does in the red zone, how he runs his routes, his mindset every time he steps on the football field. I think the thing that really kind of stands out the most is you see his personality when he plays and how much fun he has,” Kittle said. “Very similar to Gronk and his personality, the way it shows. I think they just kind of opened the door for tight ends like me to be able to express ourselves on the football field.”

Kittle is an affable guy who’s always smiling and cracking jokes. After the 49ers’ victory over Green Bay in the NFC championship game, the tight end walked around doing TV interviews while wearing a T-shirt of a bare-chested quarterback Jimmy Garoppolo that a fan sent to him.

Of course, photos and video went viral. Just like his first-down celebrations.

They’ve also been able to make plays when they aren’t there.

Last season, Kittle had the most yards after catch since the stat began being tracked in 2010 with 870. He ranked first this season among non-running backs with 602.

“One guy shouldn’t bring us down,” the 6-4, 245-pound Kittle said. “And if you have that mindset, where you’re going to run through someone’s face, it definitely makes the YAC a lot easier.”

Kelce isn’t too shabby, either, ranking third among tight ends with 410 yards after catch.