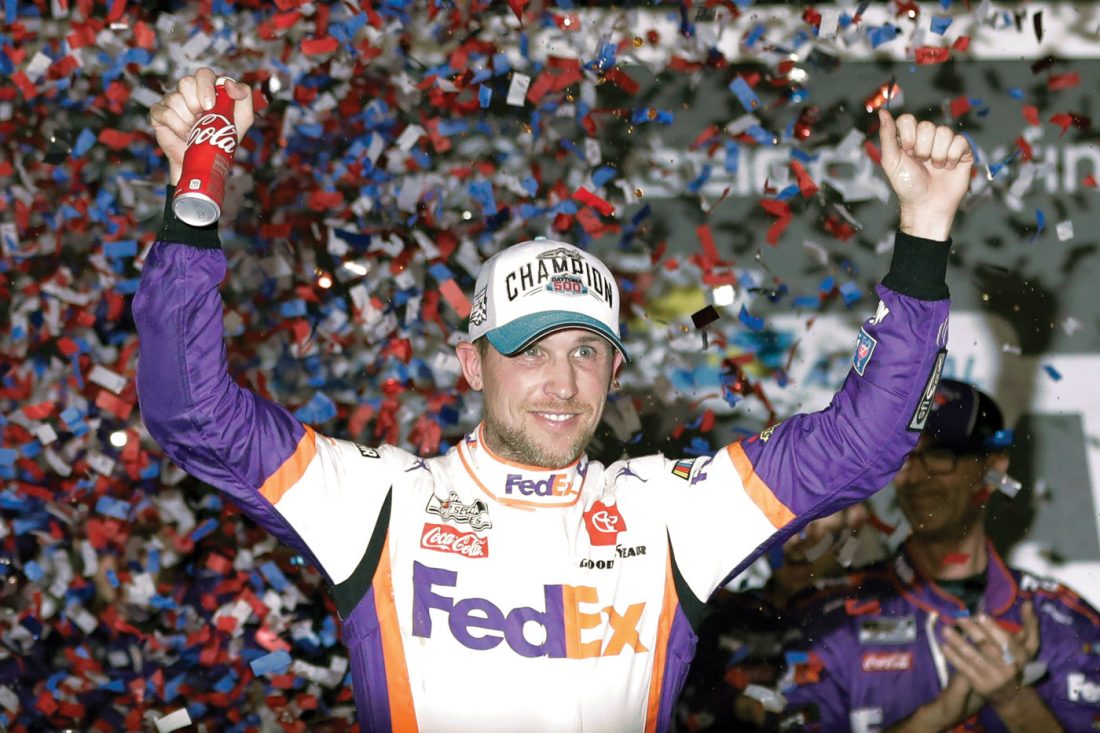 CHARLOTTE, N.C. (AP) — The stands were packed, Jimmie Johnson caused several wrecks, Denny Hamlin raced barefoot and damaged cars were repaired with the push of a button — a few virtual signs that NASCAR backed quite an unreal race.

NASCAR eased off the brake in the real sports world brought to a sudden halt by the coronavirus and introduced the country to iRacing with some of the sports biggest stars. Hamlin, the three-time Daytona 500 winner, beat Dale Earnhardt Jr. off the final corner Sunday at virtual Homestead-Miami Speedway to win the bizarre spectacle.

“iRacing got involved and emailed everyone, said, ‘Hey, this is what we’re thinking about.’ NASCAR got involved, television got involved and said they’d be interested. But no one really talked to the drivers about unifying and participating. It was all free will, and that’s what’s exciting is you had full-time Cup guys out there willing to spend their time doing this.”

It was Hamlin’s 31st victory in iRacing, which is where he was first discovered by Earnhardt long before he made it to NASCAR. Hamlin was heavily involved in putting together Sunday’s pretend race, which was broadcast live on Fox Sports 1 and called by its regular team of Mike Joy and Hall of Famer Jeff Gordon.

NASCAR has suspended racing until at least May 9, and with literally nothing else to do, series executives and iRacing put together the inaugural eNASCAR iRacing Pro Invitational Series in roughly one week. The first event was at Homestead, where NASCAR was supposed to be racing Sunday before COVID-19 brought sports to a halt.

This was a one-of-a-kind competition for most watching at home, and ended up with a familiar winner.

It could serve as a petri dish for other sports to try the whole gamer thing. The classic games aired across TV over the weekend will get old in a hurry, and networks are desperate for something fresh until sports resume.

Drivers showed immediate interest — even those with little to no simulator racing experience. Some rushed to purchase “rigs” to get into the 35-driver field, and the show-and-tell on social media of the setups provided an entertaining build-up to the event.

Hamlin, racing barefoot on an elaborate rig in the living room of his North Carolina home, had said earlier this week he’d donate $5,000 to Miami families affected by COVID-19 if he won the race and Kevin Harvick said he’d match Hamlin’s pledge. Hamlin also set odds for the race and was instrumental in a group chat among the participants.

Truck Series driver Ty Majeski, ranked one of the best iRacers in the world, competed from a computer propped on a wooden desk with a steering wheel attached. Kyle Larson said he spent $6,800 building his rig, while many of the less heralded drivers who use iRacing to hone their skills can build a setup for a few hundred dollars. A competitor needs only a chair, computer, steering wheel and pedals, but NASCAR’s superstars shelled out much more to trick out their simulators.

Hamlin estimated his rig cost over $40,000 — but defended the price because his simulator has motion features — and said better equipment makes no difference. He also said he raced barefoot because “I like to feel the pedals.”

Seven-time NASCAR champion Johnson, who has been practicing sports car and IndyCar racing on the simulator in his garage, competed from a rig that appeared more suited for one of those cars than his virtual No. 48 Chevrolet. But Johnson proved to be a less-than-elite iRacer early with a comical crash in which his car appeared to be a ping-pong ball off the wall and several other cars.

“I hope everyone enjoyed that today. I clearly have a ton to learn,” Johnson said.

Among those hit by Johnson was Alex Bowman, Johnson’s teammate at Hendrick Motorsports and one of the highly rated computer racers. But drivers can hit a reset to “fix” the damage and continue.

“No worries my virtual crew used a fast repair and it’s good as new. Also I’m eating an uncrustable,” Bowman tweeted after Johnson wrecked him. “And yeah I’m still tweeting and fake driving.”

Drivers took the event seriously, with most using the opportunity to showcase their sponsor — Landon Cassill even signed a sponsor specifically for the event — and fill fans hunger for racing. Many recruited their real spotters and crew chiefs to help. Bowman’s real crew chief Greg Ives and spotter Kevin Hamlin both watched the event from home in team shirts giving Bowman advice.

Many of the younger NASCAR drivers are world-ranked iRacers and use the game to work on their craft. The iRacing game is as close to reality as any professional sport can get because of the granular detail and precise rendering of each NASCAR track. The venues are laser-scanned to capture the bumps and imperfections in the asphalt, as well as duplicate the grandstands and billboards and pit lane.

The race, called the Dixie Vodka 150, was 100 laps around the virtual 1.5-mile Homestead oval. Dixie Vodka said it would donate $10,000 to The NASCAR Foundation, which is centralizing charitable donations in the NASCAR industry to support those impacted by the COVID-19 pandemic.