March Sadness: No brackets and no knowing what might have been 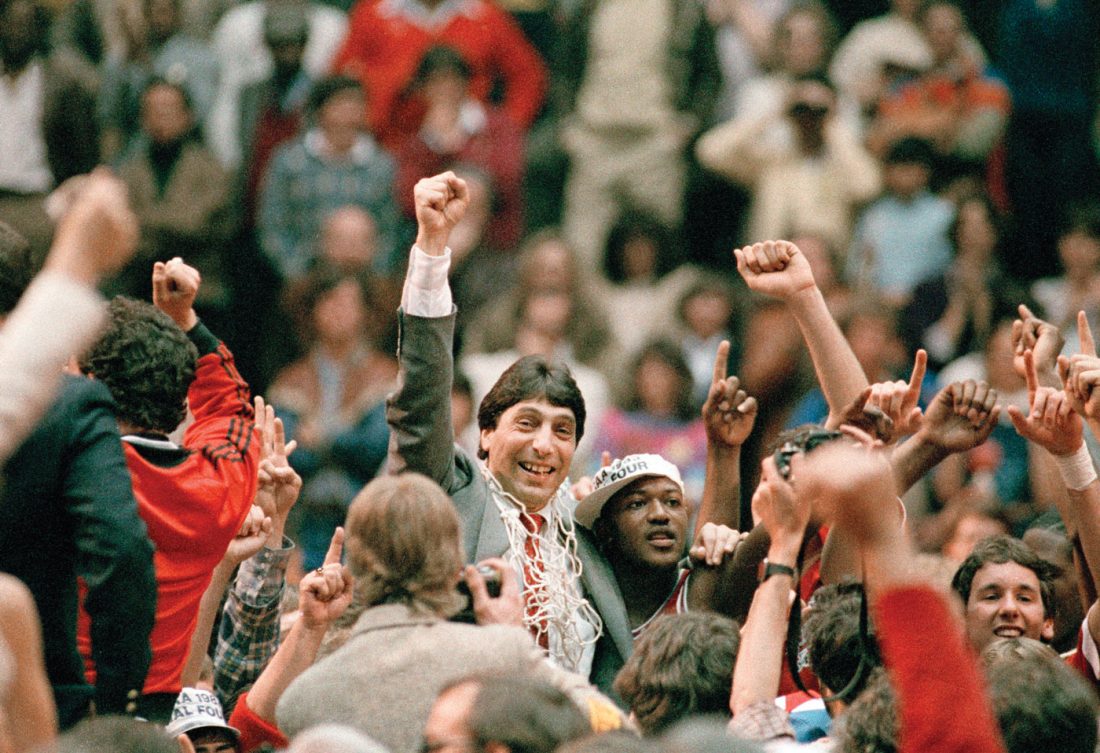 AP Photo In this April 4, 1983, file photo, North Carolina State coach Jim Valvano, center with fist raised, celebrates after the team's win over Houston to win the NCAA men's basketball tournament championship in Albuquerque, N.M. This season's tournament, like all before them, would've been filled with dozens of legends in the making and diamonds in the rough — with teams that overcame adversity to get this far and superfans who inspired the country every bit as much as their team.

For all those who dreamed the impossible — making it a whole month without getting a single game wrong in the bracket — this is your year.

Everything else about the NCAA Tournament that won’t happen this season — from Selection Sunday, to the jaw-dropping bracket busters and buzzer beaters, to the Sweet 16 to the Final Four? Call it March Sadness.

Before fears about the coronavirus scrubbed sports for the foreseeable future, Sunday was supposed to be the Big Reveal — the day when Americans gathered around a TV for an hour to watch … drumroll … a college basketball schedule being released.

It’s so much better than it sounds.

It was supposed to be the day to imagine the possibilities: all the tantalizing matchups, the upsets-in-the-makings, the favorites, and, of course, the underdogs — so many underdogs — that would pop up on the 68 lines to set the table for America over the next three weeks.

It was supposed to be the day to kick off a rite of spring, and a rite of passage — a three-week college hoops spectacular that allows people to set aside their differences and replace them with other ones. It was an event designed every bit as much for the hard-core basketball fan as for the clueless neophyte who can’t tell a pick-and-roll from a personal foul. It was for anyone with ten bucks to blow in an office pool, or who really liked picking teams that wear red, or was quite sure a Blue Devil would vanquish a Red Raider if the actual team mascots went to war.

It was … something we’re going to miss this year in our coronavirus-infected country — a year in which we really could use an escape, but will be stuck watching reruns of “Blue Bloods” instead of games between blue bloods.

It was supposed to be a year for Kansas to walk in as the No. 1 overall seed and have two stories told at the same time. The Jayhawks could be staring at serious sanctions from the NCAA, which has targeted them with the dreaded “lack of institutional control” for a series of alleged recruiting violations. They were also being led by Udoka Azubuike, the big man who left Nigeria when he was a kid for a better opportunity to play basketball. He was hoping to be reunited with his mom at the Final Four in Atlanta.

Would the Jayhawks have made it to Atlanta? Who was ready to step in if they didn’t?

A top candidate for Most Inspirational would’ve come from Dayton. The struggling Ohio city was shattered by a mass shooting last summer. Trey Landers, a senior guard at the 11,000-student Catholic school, was among those who escaped from a bar as a gunman approached with an assault-style weapon. “Our team is helping pull the city together a little bit. … It’s bigger than us,” Landers said recently. The Flyers, at 29-2 and ranked third in The Associated Press poll, were headed for a No. 1 seed.

Rutgers also was on the verge of making history. One of the most downtrodden sports programs in America was projected to make the tournament for the first time since 1991. “We would have won some games, too,” coach Steve Pikiell said. Now, all the Scarlet Knights can do is wait ’til next year.

Michigan State would’ve been in the mix, as always. Its star player, Cassius Winston, would’ve been the emotional center of any deep run by the Spartans. His brother, Zachary, stepped in front of a moving train and was killed instantly last November. “I lost a piece of my heart, but you guys you keep me going,” Winston told Spartans fans shortly after his brother’s death.

The Pac-12’s best player, Payton Pritchard of Oregon, was trying to bookend his trip to the Final Four as a freshman with another as a senior. Speaking of the Ducks, was there any more dominating player in the country than Sabrina Ionescu? She had 26 career triple-doubles and finished her career with more than 2,000 points, 1,000 rebounds and 1,000 assists. But as is the case with the men, the party will end for the women before they get their chance to shine on the big stage.

This season’s tournament, like all before them, would’ve been filled with dozens of legends in the making and diamonds in the rough — with teams that overcame adversity to get this far and superfans who inspired the country every bit as much as their team.

Might one have come from Belmont? The Ohio Valley Conference champions won a thriller of a conference title game with a last-second bucket off a backdoor cut on a play called “Liberty.”

Or, how about Liberty? The Flames had punched their ticket by winning the Atlantic Sun tournament last Sunday, before the cancellations began en masse. They’ll have to settle for a 30-4 record and the thoughts about what might have been in what would have been the program’s first back-to-back trips to the show.

Ah, what might have been. New Mexico State was an inch away from the tying layup in the first round last year, but a selfless Aggie passed on the layup and kicked it out to a teammate for an open 3. That player got fouled and made only one free throw. Advancing instead was Auburn — and the momentum from that win pushed the Tigers all the way to the Final Four. Both teams were a good bet to make it back to the show this year.

But there will be no betting. And there will be no bulldogs, either. The Butler Bulldogs — remember them? — were a shoo-in for the bracket, but the availability of their mascot, Blue III, has been a source of controversy since the NCAA banned him from entering arenas a few years ago. Blue’s handler, Michael Kaltenmark, was hanging up the leash either way after this season.

It’s ending sooner than he — or anyone — expected.

“Extremely, extremely disappointed,” said Mark Few, the coach of Gonzaga, which also was poised to be a No. 1 seed.

He’s hardly the first coach to see his team’s dreams crushed in March. But there wasn’t a player, coach or fan in America who thought the season would end before the fun even began.