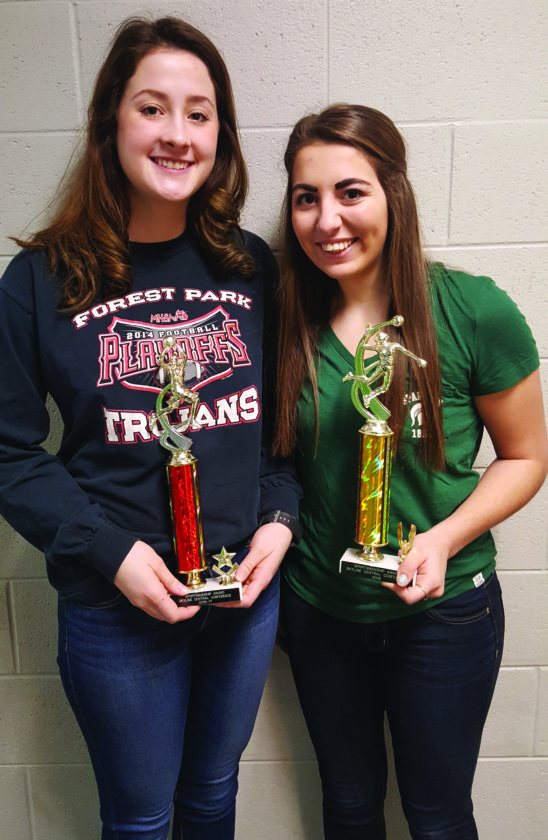 Forest Park High School seniors Becky Kolenda and Emily Faccin took both of those honors for this school year. Conference coaches vote on the honors.

Kolenda sat out the past two basketball seasons, returning this year to average 7.5 points per game and earn all-conference honorable mention.

“Despite having to leave the team her sophomore and junior year, she had the courage to come back to the team this year and asked to be able to join us again,” said Lady Trojans coach Jackie Giuliani. “This year she has excelled as a part of our team.”

Giuliani said Kolenda brings a positive attitude “that helps make everyone around her want to become a better person.”

“She always puts everyone around her first,” Giuliani said. “We would not be the team we are without her and I am so thankful that she was able to come back and didn’t give up on being a part of this team and that the team didn’t give up on her.”

“Emily has always been so supportive of her teammates,” Bjork said. “She’s not a standout athlete but she works hard and is always keeping the team pumped up whether she is on the bench or on the court.”

Bjork made an example out of Faccin when some girls weren’t happy with playing time.

“Emily played in only three matches last season but you never would have known it,” Bjork said. “She never complained and she was always at practice working hard. She never blamed anyone for her lack of playing time and she would always ask what she could do to improve.

“I don’t think any of us as coaches would have thought at the end of last season that Emily would be playing in every match this season.”

Faccin was a defensive specialist this past season.

“She is coachable and that’s a big reason she improved so much from last season,” Bjork said. “Emily is very unselfish and it has been so awesome to see a girl like her not let playing time affect her attitude or desire to be a part of the team.”