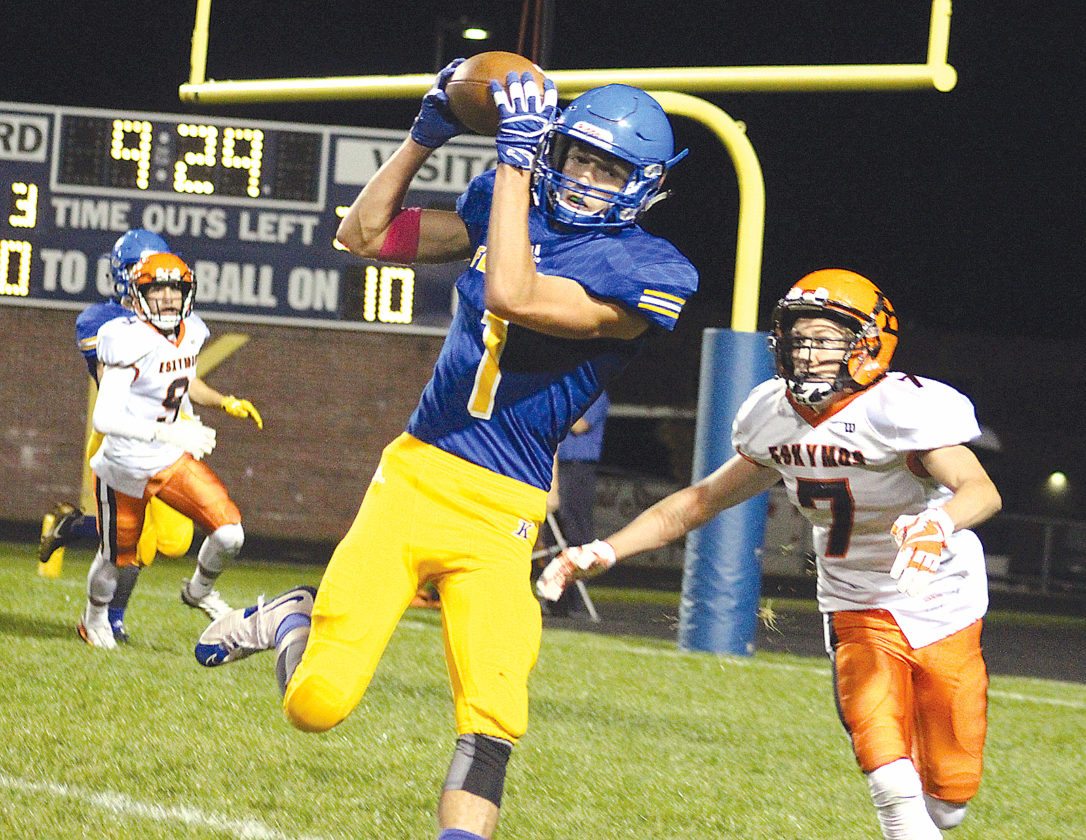 Kingsford’s defense made another second-half stop and sent the Flivvers past Escanaba 21-14 for their first GNC title since 2012.

“This was about as good as it gets,” said Kingsford head coach Chris Hofer. “This was nerve-wracking. We hung on and got it done.”

The halftime score was deadlocked at 14 after the Flivvers’ quarterback Sawyer Perpich threw for two scores and Eskymos’ back Logan Carroll bolted for two touchdowns.

But the second half was a defensive tussle won by the Flivvers. Escanaba was limited to four offensive series and 104 yards total offense in the second half.

“We had two great teams playing and it came down to the wire like it should have,” said Escanaba head coach Dave Howes, his Eskymos seeking their first GNC title since 1981. “We have to move forward. We played a great team and it could have went either way.”

The Flivvers (7-1, 4-0), fueled by a passing game with short throws, moved 85 yards in nine plays on the first series. A 15-yard horse-collar tackle penalty also boosted the Flivvers, who capped the drive with a 10-yard touchdown pass to Chase Kreski.

The Eskymos (7-2, 3-1) answered on the next series of the first quarter. Carroll raced through a hole in the middle for a 56-yard touchdown. The senior finished the night with 157 yards on 14 carries.

Kingsford was driving for a tie-breaking score when Scout Wunder picked off a pass in front of Luke Terrian at the Esky 10.

Escanaba, demonstrating superb speed and quickness, then rolled 90 yards as Carroll crashed the middle from 10 yards out for a 14-7 difference in the second period.

“They were gutting us in the first half,” Hofer said.

The Flivvers came back on the next series with the tying touchdown. Perpich rolled right and found a well defended Terrian for a 17-yard touchdown pass with six minutes left before halftime.

In the first minutes of the third quarter, Escanaba failed to move and Tyler Beauchamp rambled 24 yards with the punt return to the 40. The Eskymos, flagged eight times for 75 yards in the game, drew an off-sides to put the Flivvers at the six.

Terrian, taking a direct snap, plowed six yards for the go-ahead points. Kreski followed with his third point-after kick and a 21-14 margin.

The Flivvers nearly padded the lead, advancing to the Esky 5 before Cody Vandermissen hauled down Terrian on fourth down.

“I screwed up down by the goal line,” Hofer said. “We should have done something else.”

In the fourth quarter, Escanaba converted a pair of fourth-down calls — one from its own 25 — and chugged to the Flivver 20. But a holding penalty helped foil that effort.

After a short Flivver punt that landed on their 49, Escanaba reached the 23 after Ryan Robinette grabbed a 26-yard pass from Craig Kamin on fourth down.

Terrian sacked Kamin on the following play at the 32. Faced with fourth and 20 from there, a scrambling Kamin came up short at the 14.

“We were having a hard time getting stops in the first half and then in the second half we got some early,” Hofer said. “We changed a lot of things defensively. They were hurting us and we had to find a way to take away some of their stuff they were doing. We got a little more pressure off the edge and made them go to something else.”

Escanaba was hobbled in the second half by the absence at times of Joshua Grassel and Scout Wunder.

“We’re a little bruised up right now but we have to recover and get ready for next week,” Howes said. “We had some cramps and other injuries we’re concerned about.”

Escanaba had 359 yards of offense, with 246 on the ground. Kingsford produced 252 yards, with 189 through the air. Perpich was 17 of 19 passing, with one drop and one interception. Beauchamp had five catches for 64 yards and Kreski had five for 55.

Kingsford’s GNC hopes didn’t look all that promising early in the season when first-line running backs and linebackers Aidan Miller and Aden Johnston went down with ankle injuries. Johnson returned to action Friday for the first time since Sept. 1.

“Other guys stepped it up and we didn’t lose anybody else (to injury),” Hofer said. “The biggest thing is that a lot of our guys got better as the year went on.”

“I’m proud of our kids, proud of where we’re at,” Howes said. “We lost to a heck of a coach in Chris Hofer and a heck of a program. We had two good teams battling it out for the GNC, That’s he way it should be.”