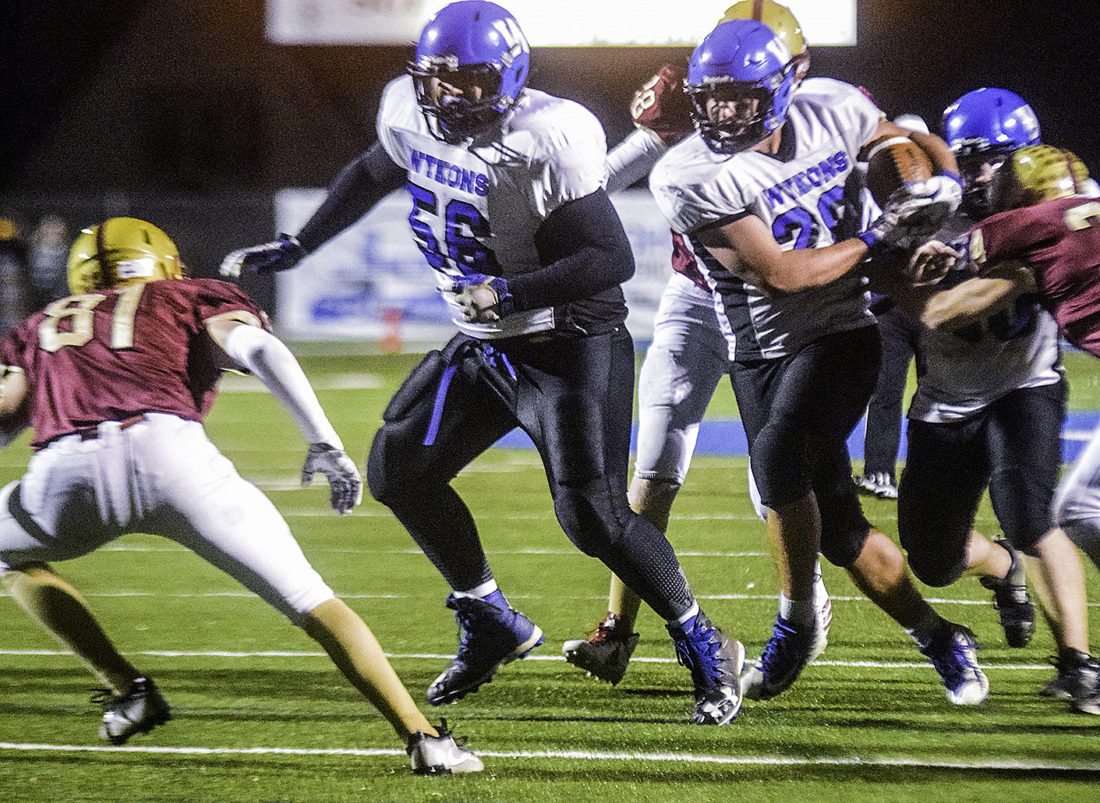 HANCOCK — Jayce Brockhagen took a handoff and ran straight into a wall of four Hancock defenders who were attempting to keep the West Iron County senior back from scoring a 2-point conversion.

Brockhagen lowered his shoulder and ran through the Hancock defense as the four Bulldogs fell off of him, allowing Brockhagen to give his Wykons a 14-13 lead it would not relinquish.

It was the type of play hard-nosed run that epitomized West Iron County’s memorable Friday night at McAfee Field: a 30-13 win to capture the 2017 West-PAC championship.

“All week, all season that’s all we’ve been focusing on is the West-PAC championship,” said Brockhagen, who ran for 164 yards on 21 carries and scored three TDs to go along with a 9-yard TD reception. “This team has played together since middle school. We just play really well together, communicate and don’t give up.”

The nonconference Week 1, 14-12, loss to the Bark River-Harris Broncos was the first loss the WIC juniors and seniors suffered together since junior high. Since then, it’s been seven consecutive victories for a unit that appears to be playing its best football at the key time of the season.

“These guys just seem to find a way to put up that fight and stick together,” WIC head coach Mike Berutti said.

It also helps when you have a back in Brockhagen who has the rare blend of power and speed that’s not usually seen at the high school level. At 5-foot-11 and 235 pounds, Brockhagen runs a 40-yard dash in the 4.6 range, making him a unique downhill power back.

“We knew he’d be good coming in,” Hancock head coach Ted Holmstrom said. “It’s always hard to stop when you have a player of that ability, and he has some good players around him, too.”

Trailing Hancock 7-6 at halftime, WIC (7-1, 6-0) made some blocking adjustments to deal with Hancock’s blitzing linebackers. The Wykons’ first-string offense then went 3 for 3 on scoring drives in the second half, with Brockhagen capping drives of 68, 79 and 42 yards with runs of 5, 8 and 2. He also added the 2-point conversion after each TD.

“We just went back to our power football,” Berutti said. “Line up, run it right at you and just try to stop us. I think the physical style we play wears the bodies out. I think we ended up wearing them down in the second half.”

All season, Hancock’s two-platoon system has managed to tire opposing teams out. And while the Wykons may not start 22 players on offense and defense, they do start 15 and manage to sub three to four other guys in sporadically. This depth, plus the ball-control offense that waited until the final seconds of the play clock to snap the ball, was able to negate the advantages of Hancock’s two-platoon system.

“Those two long drives to start the second half didn’t allow us to wear them down,” Holmstrom said. “That took the wind right out of our sails.”

With a 22-13 lead, WIC senior Neil Tomasoski came down with his second interception at the Hancock 42. Seven plays later, Brockhagen sealed the game’s outcome with his fourth score of the night.

For Hancock’s offense, it will go down as a night of miss opportunities. Despite outgaining WIC in the first half, 191-64, the Bulldogs (6-2, 4-2) settled for a one-point lead.

Midway through the second quarter, Brockhagen forced a Hancock fumble at the Bulldogs’ 1, allowing Tomasoski to recover in the end zone for the touchback. And just before the first half ended, Hancock suffered a turnover on downs at the WIC 25.

“When you’re in a big game like this, you have to protect the football,” Holmstrom said, “and you have to take advantage of the opportunities you get, and we didn’t do that either. Those two things stick out.”

Tomasoski’s first interception came on Hancock’s opening possession to set up the Wykons first drive. On fourth-and-goal from the 9, Tomasoski rolled right and found Brockhagen in the end zone for a 9-yard TD pass.

Each of Hancock’s scores followed WIC touchdown drives, and the Bulldogs immediately had an answer on its second possession, with senior Alex Nordstrom scoring from 9 yards out to finish a 65-yard drive. Nordstrom led Hancock with 96 yards on 17 carries.

The Bulldogs’ lone other score came on a 10-yard run up the middle from senior Aaron Barnes to cut the deficit to 14-13.

Next, each team will have a final tune-up before the playoffs; Hancock hosts Houghton in the Copper Bowl on Friday, while WIC welcomes L’Anse on the same day.