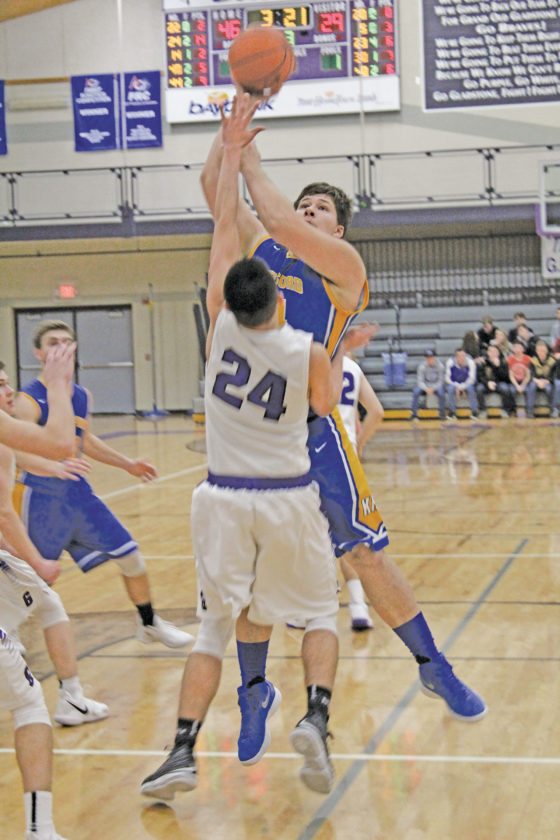 Kingsford's Liam Gayan puts up a shot over Gladstone's Brad Spindler (24) during the second half Thursday in Gladstone. (Avery Bundgaard/The Daily Press)

It was the Flivvers (7-7, 2-4) that got out to the big start going up 9-5 right away. The Braves picked up the pace and outscored Kingsford by 10 through the rest of the quarter, taking a 16-10 lead by quarter’s end.

Kingsford’s Tyler Beauchamp hit the first shot of the second quarter but it was all Gladstone after that.

The Braves scored the next 12 points to build a 16-point lead and they coasted the rest of the way taking a 36-22 halftime lead.

“We had some full-court pressure on them with our half-court trap,” Quigley said. “That kind of helped them turn the ball over a little bit or forced them into some quick shots. We were able to get out and run and push the ball which is our style of play.”

The Flivvers scored the first four points of the third quarter but the Braves responded with an 8-0 run of their own to take their largest lead of the game at 18 points.

Kingsford chipped away at Gladstone’s lead the rest of the quarter and cut the deficit to 11 points after the third quarter.

Beauchamp hit a 3-pointer and a layup to cut the Braves’ lead to six early in the fourth quarter. The Braves came right back building its lead back up to 13 with a 7-0 run, five which came from Reece Castor.

Castor fouled out soon after with 4:15 remaining, leaving the Braves without its best player the rest of the way.

That’s when the Flivvers made their move led by Beauchamp scoring 17 of his game-high 30 points in the fourth quarter. He made all three free throws after getting fouled behind the arc bringing Kingsford within four with 1:15 remaining.

“It was a tale of two halves for him,” said Kingsford coach Dan Olkkonen on Beauchamp who only had two points in the first half. “He was able to get some really good shots for us in the second half. He caught fire there in the end and that fires everybody up.”

The Flivvers intentionally fouled Gladstone. The Braves were clutch from the free-throw line, making 9 of 10 in the final minute to put Kingsford away.

“I don’t think we were shooting free-throws very well throughout most of the game so to hit them their in the fourth quarter down the stretch of the game was huge,” Quigley said.

Brad Spindler led the Braves with 22 points while Castor and Rudy Peterson each had 14.

Luke Terrian followed Beauchamp in scoring for the Flivvers with 13 and Nate Rutter added 12.

Gladstone, which won the JV game 68-61, travels to Negaunee on Tuesday while Kingsford hosts Iron Mountain.