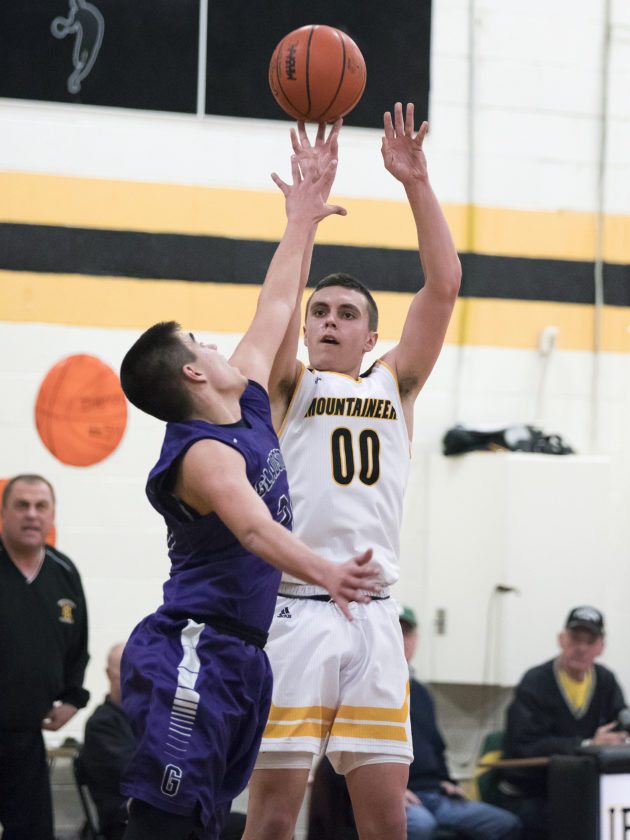 “First of all Gladstone’s a really good team, they’re talented and they’ve been coming on at the end of the year,” Iron Mountain head coach Bucky Johnson said. “For us to play the way we did and get the win, I thought it was a hell of an effort by our guys. I thought they played really hard.”

The Braves (11-5) made it hard on Iron Mountain, coming back from a 12-point deficit to within a point and less than a minute remaining.

“It was nice to make that comeback through some adversity,” Gladstone head coach Dan Quigley said. “I was just talking to our team. We struggled doing that earlier in the year but to be able to do that was big for our team. It was upsetting that we couldn’t fight through it some more.”

“We knew we could attack a little bit more. Our goal was to try to take it at the guys who had the fouls and try to get them out of the game if we could,” Quigley said. “They had to play a little bit more cautious because they didn’t want to pick up their fouls. We thought we could get a couple more buckets and better looks. I thought we did a good job of that, but they’re the No. 1 team in the UP for a reason.”

The game’s physical tone led to some chippy play in the fourth quarter. Spindler was called for a technical foul for pushing Johnson down in the final minute of the game.

“I think it’s a great high school game with a great atmosphere,” Quigley said. “It did get chippy but I think it’s two intense teams going at each other. Both teams really wanted to win this game.”

Coach Johnson said his team made it tough but battled through missed shots and free throws in the final minutes. Iron Mountain held a 53-41 lead after three quarters. Gladstone made it a 67-66 game with 48 seconds left.

“We missed a couple shots at the end that were point-blank shots that we’ve been making,” he said. “You make those shots you almost have the dagger in them, but we didn’t do it. Then we missed a couple free throws there at the end. Just a great victory. Winning the Mid-Pen championship this year was no easy task with teams like Ishpeming, Westwood, Negaunee, Gladstone to say the least. We want this to propel us into our next game.”

Quigley said the Braves may have taken control of the game had Rudy Peterson hit a long-range 3 in the final minute that would have given the Braves the lead.