Mountaineers down 3 at half, but Miners hit shots to extend lead, win 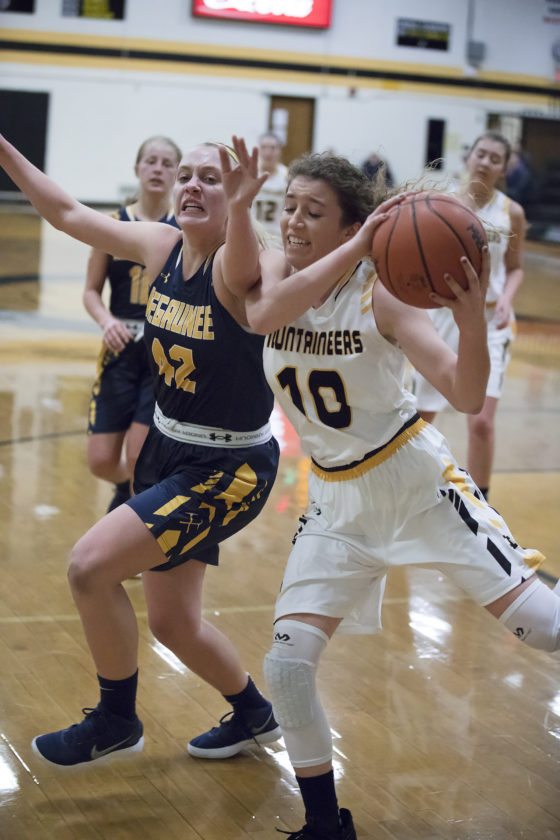 The Miners (16-0), ranked No. 2 in the UPSSA Class ABC poll and No. 5 in the statewide AP poll, held just a three-point lead at the half.

But Negaunee torched the net with four 3-pointers in the third quarter to widen the gap for good.

“It was what we expected coming in here after their big win on Tuesday and knowing they were going to play some zone,” Negaunee head coach Brandon Sager said. “We haven’t seen a lot of it this year. We were ready for it, we just didn’t play together. We tried to do too much off the dribble versus off the pass. It got us in trouble but our defensive pressure was able to come out in the third quarter and separate us a little bit.”

Negaunee was saved in part by the 3-pointer. The Miners shot better from long-range (11 of 25) than inside the arc (8 of 26). The Miners’ four 3s in the third quarter gave them a 42-31 lead going into the final quarter.

Iron Mountain’s stingy defense and offensive execution had paid dividends in the first half. Riley Poupore sank a buzzer-beater from beyond NBA range that closed Negaunee’s lead to three points at halftime.

“We played with them for a while and I thought that was pretty great,” Iron Mountain head coach Katelynn Johnson said. “The first half we were right there with them. Had a bit of a momentum swing at the end of the first half — Riley Poupore and her halfcourt shot.”

Iron Mountain (3-12, 2-7) held short leads in the first half thanks to improved offensive execution, Johnson said.

“Offensively everyone knows Poupore is our threat. She does a great job of distributing when people are pressuring her,” she said. “We work the ball around offensively. We executed pretty well. We were rebounding offensively, so that’s something we don’t always do every time. The first half was much better than the second. Sometimes in the second half the shots are going in. They’re shooting 10 feet past the line, extending us out. That’s by far the best team that we’ve played shooter-wise, for sure. They’ve got a bright future ahead of them.”

Natalie Bartle’s 24 points led the Mountaineers. She also knocked down four 3-pointers including one in the third and two in the fourth quarter.

Poupore led the Mountaineers with 22 points. She and Faith Bal each had nine rebounds.

Sager said his team’s 3-point shooting was a bit out of character.

“We haven’t shot very well from 3 this year,” he said. It was a good night to come out of that slump a little bit.”

Johnson, a first-year coach, took over a young Mountaineers team at the beginning of the season and the whole team started fresh.

“I’ve put in 25 plays or more that they’ve never ran before in their lives. Of course at the beginning it’s a learning process. It’s hard to learn those things if you’ve never done them before and to know the ins and outs of the plays,” Johnson said. “You can learn a play, but you don’t know the ins and outs and where to go. But definitely we’re getting much better at that and not rushing as much. I told them that’s important not to push so hard. Sometimes you’ve got to pull it out and restart.”

Sager said Iron Mountain’s effort was a challenge for Negaunee.

“They out-played us for a good portion of the game. They beat us to 50/50 balls, they out-rebounded us. We were just a little sluggish,” he said. “We had a long road trip to Calumet Tuesday and tried to rest yesterday. Not making excuses. They definitely out-played us tonight. They wanted it a little bit more.”

Negaunee plays at Ishpeming in a makeup game on Saturday.