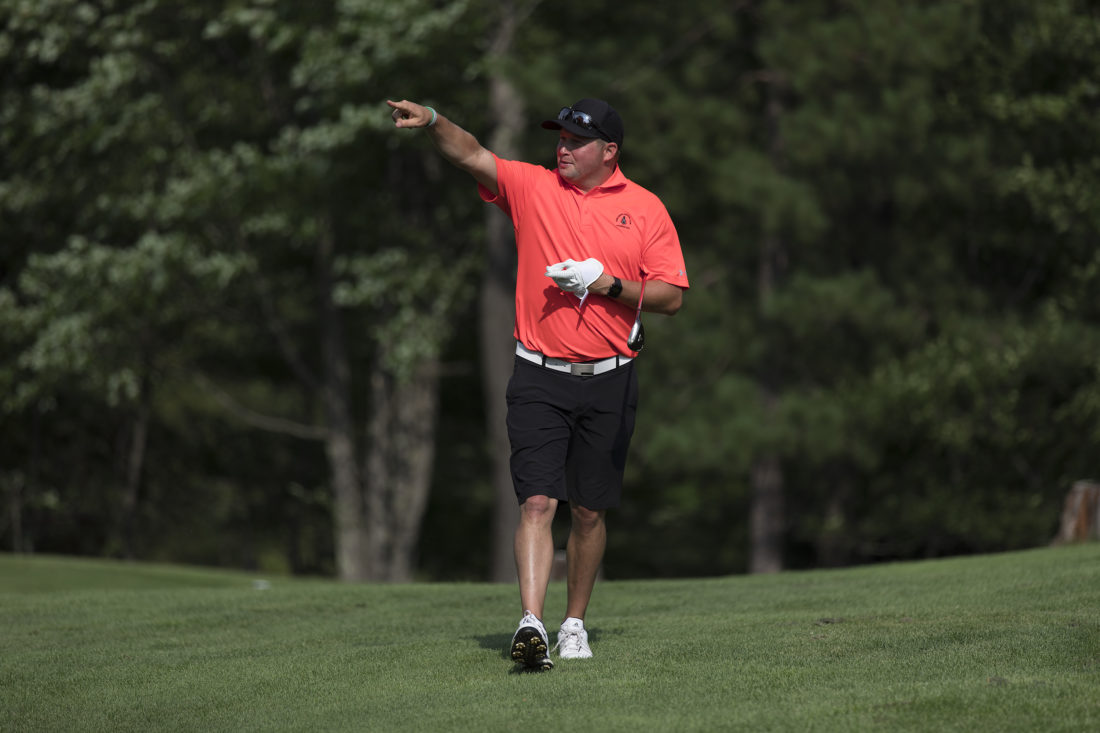 Ryan Pepin points to the crowd after making a birdie on a 30-yard chip on the 17th hole during the UP Golf Association Men’s Championship at Oak Crest Golf Course on Friday, Aug. 10, 2018, in Norway, Mich. (Adam Niemi/Iron Mountain Daily News)

Carney’s Hunter Eichhorn, already established as one of the nation’s premier golfers, captured his first UP men’s title by 13 strokes after shooting a two-under par 70 Friday.

Eichhorn, who had hoped to be preparing this week for the US Amateur, signed on with the UP event when his schedule cleared.

“It means a lot,” said Eichhorn, who won four UP titles at Carney-Nadeau High School and went on to earn 2017 Big East Conference Player of the Year at Marquette University. “I was excited to come here and get a victory.

“There’s a lot of great UP players on that trophy. I’m really thrilled to join them.”

“Hunter is one of the best, there’s no doubt about it,” said Clements when asked where Eichhorn ranks over the years in UP golf. “His all-around game is phenomenal. He takes a cut at it and he’s a pleasure to watch.

“I’m glad he came and glad his name is on that trophy because he deserves it. It’s special having it on there, too.”

Eichhorn’s closing round had birdies on the sixth, eighth, 11th and 16th holes.

“It was solid,” Eichhorn said of the final round. ” I didn’t make many putts. I hit the ball pretty good. All in all, it was pretty stress-free. That’s what I was hoping for.”

“One of the worst losses I’ve ever had,” said Eichhorn, the third-round Wisconsin Amateur leader who ballooned to a 78 in the final round and finished in a tie for fourth. “It was unfortunate it was the last round.

“All in all, it was good for me. It kind of lit a spark under me to come here and compete again.”

Eichhorn, who carried a 13-shot lead into the final round of the UP, didn’t let the Wisconsin tourney shake him despite one of his two bogeys Friday in the second hole. His other bogey was on the par-three 17th.

“I got off to a tough start today, kind of like I did a couple weeks ago,” Eichhorn said. “I kind of hung in there and got it back together.”

Eichhorn shot one-under on each nine Friday. His previous rounds were 64, 65 and 68. Clements, finishing second in the UP tournament for the first time, posted rounds of 33-37 Friday.

“Today was kind of ho-hum,” said Clements, who was in contention to win the 2017 UP title. “Hunter struggled a little bit on the greens. He was close all day but he couldn’t get one to go. It was tough putting out there.”

“They had real solid pins,” said the Marquette University sophomore. “They tricked a lot of us. I was tricked multiple times.

“Credit to them for putting them in tough spots to give us some challenges.”

Houghton’s Gunnar Stein, who rallied past John (Gus) Koskinen and Clements to win the 2017 UP championship, finished third at 284 — four strokes behind Clements.

Iron Mountain’s Ryan Pepin, who electrified the gallery by holing a 90-foot chip shot Friday to birdie the 17th hole, placed fourth at 290.

There’s no telling now if Eichhorn’s 2019 schedule will allow him to defend his UP title at Terrace Bluff in Gladstone.

“Schedule permitting, I hope to make it back next year,” he said. “This year, if I would have made it to the US Am, I wouldn’t have made it. We’ll see what next year brings.”