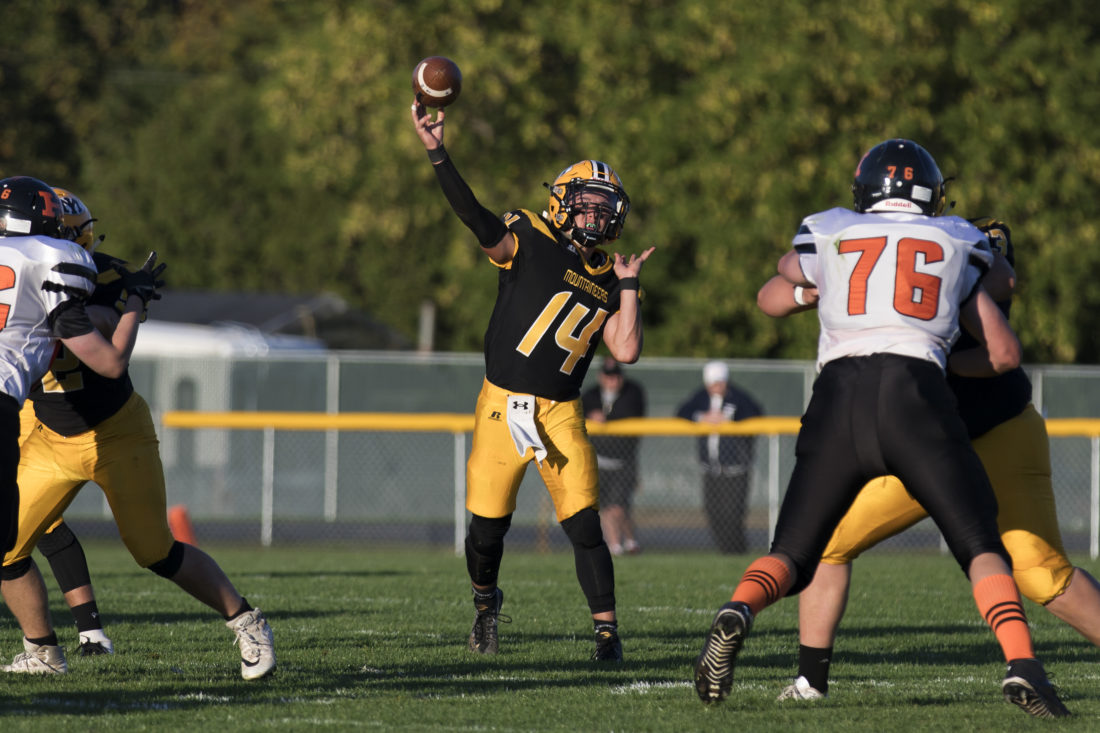 IRON MOUNTAIN — After a slow first quarter, Iron Mountain picked up more and more momentum in a 42-0 rout in the first-ever football game with Houghton on Friday.

The Mountaineers (2-1) gathered 341 total yards of offense, limited mostly by a slow first quarter and a running clock in the second half. Iron Mountain rushed for 138 yards and passed for 203 in the home opener at Mountaineer Stadium.

“We did what we had to do. We made plays,” Iron Mountain head coach Robin Marttila said. “We had some mistakes out there, no doubt. Some mistakes in different areas. It’s a good team win. I’m happy for our home opener.”

Zach Herrick rushed for 49 yards and a touchdown on 10 carries for Iron Mountain.

Houghton’s offense didn’t fare as well. The Gremlins (0-3) had three total yards of offense, including 10 rushing and -7 passing. Houghton’s longest run of the night was a 7-yard run on a third-and-11 in the first quarter.

Neither team gained a foothold in the opening six minutes of the game. Iron Mountain received the ball and turned it over on downs after an incomplete pass on a fourth-and-5.

Houghton gained possession at its own 45 but turned it over on downs a minute later.

The Mountaineers took the ball back at the Houghton 46 and scored about three minutes later on a 10-yard pass from Marcus Johnson to Caleb Evosevich-Hynes.

The Gremlins punted on their final three drives of the first half.

“We started out just not performing,” Houghton head coach Kurt Huffmaster said. “We had a lot of mental mistakes. I expected better. I’ll take full blame. My team was not ready to go tonight.

“We had to establish the run game but it’s that way every week. If we can’t do that, our passing game’s not going to be proficient. We just didn’t get the run going early. Defensively we weren’t ready to take the spread the way that they ran it. They were effective, we weren’t.”

Iron Mountain added another score at 10:34 with a 1-yard run by Bryce Pietrantonio.

About four minutes later, Mountaineers scored another touchdown on a 56-yard pass to Evosevich-Hynes.

The Mountaineers held a 20-0 halftime, then added two scores in the first. Charlie Gerhard caught a pair of touchdown passes at 14 yards and 25 yards for a 35-0 lead going into the fourth quarter.

Iron Mountain added a 3-yard score on a run by Herrick.

Houghton’s Nate Erva left the game in the third quarter with an injury. Huffmaster said he didn’t know what the injury was.

“He got banged up in the third quarter. We’re still waiting up for that one. We’ll see what the injury was,” Huffmaster said. “With our numbers right now, one guy gets hurt and we’re shifting guys all over the place. We’ve been giving him all the reps. We just weren’t ready to adjust tonight.”

It was the first-ever meeting between both football programs. Huffmaster said he’s been aware of Iron Mountain over the years.

“They’re a perennially good team, always have been,” he said. “I remember that going back to when I was coaching Northern back in the 80s. They’ve been good since then and we just aren’t quite up to that level yet.”

Friday’s game was the first for Iron Mountain’s new scoreboard dedicated to the late Tom Johnson, athletic director at IMHS for 15 years during a 39-year career in education in the area. He was named the 2009 UP Athletic Director of the Year. He passed away a couple months later at the age of 60.

“Tommy Johnson was a great Mountaineer. He’s one of the main reasons I got hired at Iron Mountain,” Marttila said. “He’s had an impact on everyone on our coaching staff. We have a relatively older coaching staff. There’s a reason everybody gets together and does the fundraiser in the Tommy Johnson golf outing. There’s a reason that people want to name a scoreboard after Tommy Johnson. He was just a great Mountaineer. He did a lot for our school system, period.”