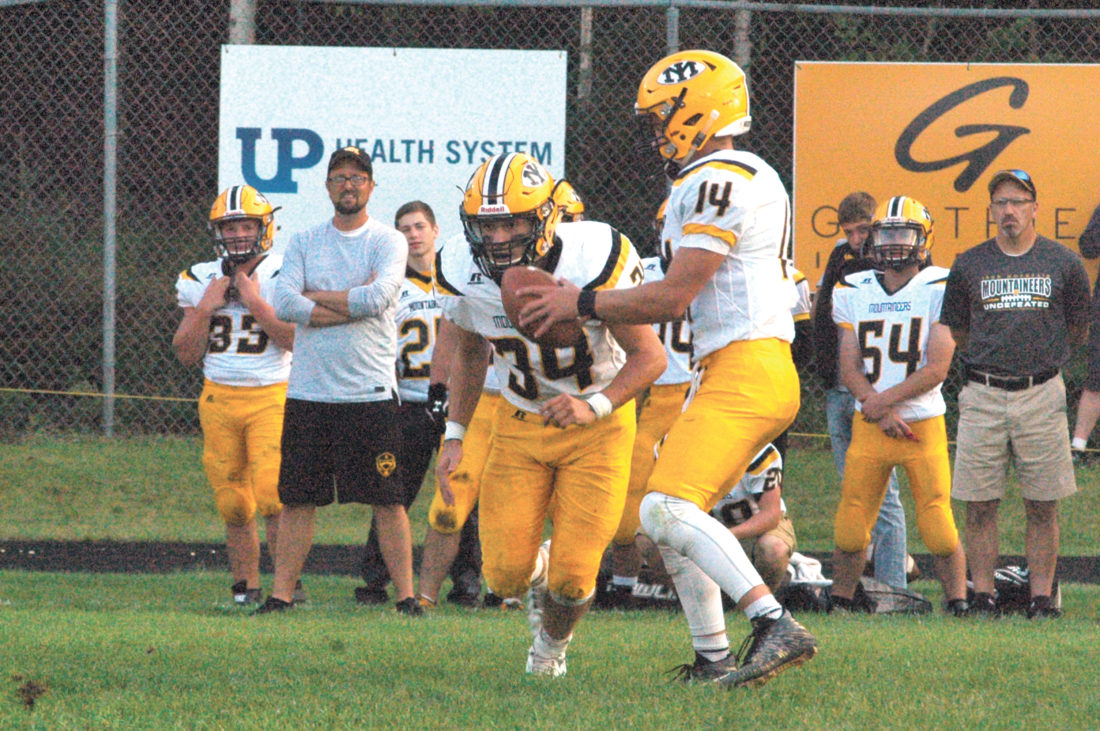 The Patriots (2-0) posted a 34-7 victory over Iron Mountain at the Patriots’ field.

Westwood head coach Scott Syrjala said he was pleased with his team’s energy from right off the bat.

“I was happy with the way our kids came out of the gate tonight,” he said. “I thought we were more focused than we were last week out of the gate and we just beat a really good Iron Mountain team. We were able to capitalize on some of their mistakes early on.”

Syrjala added that despite the lopsided score, his team was still forced to adjust as Iron Mountain (1-1) tried switching things around.

“I thought our kids did a really good job of adjusting to what they were giving us,” he said. “That’s what you’ve got to do against great teams. I thought we could have grinded a little better in the second half, but it’s early in the season, our kids are learning and they’re getting there.”

“We made a couple of mistakes early in the first quarter and they (Westwood) capitalized on that and it snowballed from there,” he said. “They’re a good football team no doubt, they’re as good as advertised, but we didn’t help ourselves here. We made too many mistakes on both sides of the ball but that’s a credit to Westwood, they had something to do with that, too.”

The Patriots wasted little time getting on the scoreboard, going six plays on the opening drive and finding the end zone on a 3-yard Beckman run on second-and-goal.

On the ensuing kickoff, Iron Mountain fumbled the ball, which was recovered by junior Mason Mariuzza to set up the Patriots in great field position.

That drive lasted just four plays as Westwood set up shop when Beckman made a screen pass to junior Taylor Dellangelo for an 18-yard gain to the IM 4. Beckman then found Dellangelo again for a 4-yard TD pass. The two-point attempt failed again to make it 12-0.

After IM senior Charlie Gerhard returned the ensuing kickoff to the IM 35, the Mountaineers went three-and-out and were unable to get the fourth down conversion, giving the Patriots’ offense great field position again.

Over just three plays, Beckman completed a 28-yard pass to junior Erik Anderson to set up Bergman for a 3-yard scamper into the end zone and 18-0 advantage.

Westwood scored twice more in the second quarter on a 10-yard run by Bergman and a 39-yard TD pass from Beckman to Anderson, making it 34-0.

Iron Mountain finally found the scoreboard on its next possession, chewing up yardage on the ground. Gerhard got the drive started in his own end with a 21-yard run, then junior quarterback Marcus Johnson ran for 44 more. A horse collar penalty on the Patriots moved the ball to the Westwood 9.

That’s when Johnson found Gerhard for a TD pass to make it 34-7 at the half.

Beckman said he enjoys the win, but his focus has already shifted to next week.

“It always feels good to get a win,” he said. “We’re happy, we’re going to savor this, but it’s also onto next week.”

Bergman said the Mountaineers threw everything they had at the Patriots, but he and his teammates answered the call.

“It was good to get a fast start,” he said. “Iron Mountain is a good team, so we had to buckle down. They definitely hit us and punched us in the mouth, but I thought we responded very well.”

Beckman went 8 of 12 through the air for 150 yards, adding 63 yards on the ground. Bergman rushed for 143 yards on 24 carries while Anderson had two catches for 67 yards.

Iron Mountain rushed for 150 yards and went 5 of 19 through the air for 44 yards. Individual stats for the Mountaineers weren’t available.