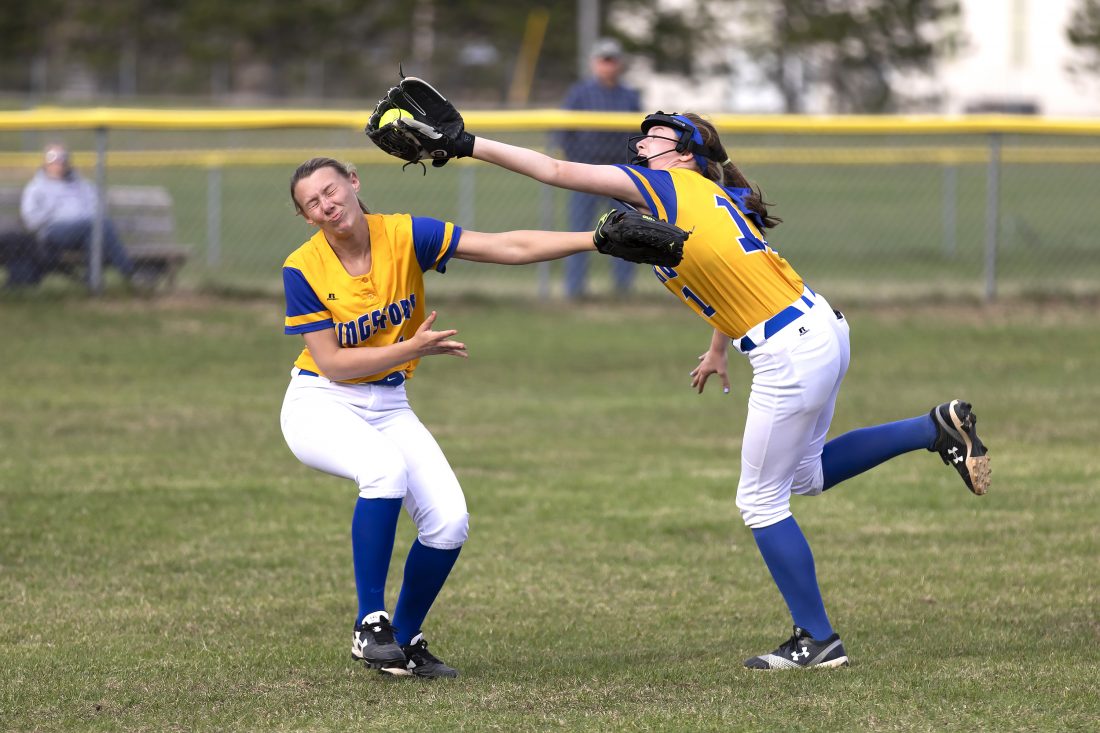 Kingsford's Abby Terrian, right, catches a fly ball next to Madisyn Johnson during a game against Gladstone on Monday, May 13, 2019, in Kingsford, Mich. (Adam Niemi/Iron Mountain Daily News)

KINGSFORD — Gladstone’s bats came alive with a five-run seventh in the nightcap to sweep Kingsford on Monday.

Kingsford (12-9) tied the second game at 1-1 with a home run by Maggie Strehlow in the fourth inning. The ball bounced off the Porta Potty just inside the right field foul pole.

“Good thing there was nobody in there or that would’ve helped them out a lot,” Kingsford head coach Kevin Murdock said.

Then the seventh came around. And so did Gladstone’s bats. Six hits including a home run by Sydney Herioux gave the Braves breathing room.

“These girls have been hitting great all year,” Gladstone head coach John Nevala said. “For Kingsford to hold us on the amount of runs, give them credit. They finally got the bats going that last inning. That’s the way they’ve been hitting most of the year.”

Kingsford made a last-gasp push in the bottom of the inning with three hits coming on two outs. A double to the right-center gap by Strehlow scored a run. But Kingsford grounded out to end the game, stranding runners on second and third.

Gladstone took a 1-0 lead in the second. Strehlow’s homer tied it in the fourth before the Braves took a lead again in the sixth. The Flivvers answered with the tying run in the bottom of the inning.

Emily Curtis pitched for Kingsford. She gave up seven runs on 14 hits with two walks and one strikeout.

“Two bad innings. That seventh inning is a killer when you’re 2-2 and give up five runs,” Murdock said of the nightcap. “That’s just a killer. They’re a good team, they can hit the ball. We eated them here and there and that’s all it takes. We hit the No. 9 hitter. There was an error. Come up to the top of the order and they get base hit, base hit, base hit. That just deflates you.”

Morgan Letteriello pitched for Gladstone and gave up three runs on nine hits with no walks and four strikeouts.

Curtis had two hits for Kingsford. Strehlow had a single to go along with her home run and double.

In the first game, Gladstone’s four-run third inning came on six hits. It gave the Braves a 5-1 lead.

Kingsford responded with three runs on three hits and a walk in the bottom of the inning. But the Flivvers were held to just one hit for the rest of the game.

Murdock said the middle of the lineup is spearheading the team’s offense. The 3-5 hitters had a combined nine hits on Monday.

“You look at our third, fourth and fifth hitters, they’re getting a ton of hits right now,” Murdock said. “Third, fourth, fifth and sixth. Maybe the batting order needs to be reworked a little bit. We’ve got some people that can put the bat on the ball. We just need the rest of the people to start getting on base now.”

Strehlow pitched the first game for Kingsford and gave up seven runs on 14 hits with two walks and five strikeouts.

Andie Balenger pitched for Gladstone and gave up four runs on six hits with one walk and six strikeouts.

“Our pitching’s been solid all year,” Nevala said. “We’ve been going with both of them all year. If one of them gets in trouble, we bring in the other. We’re very confident in both of them.”

Kingsford plays at Marquette on Thursday.