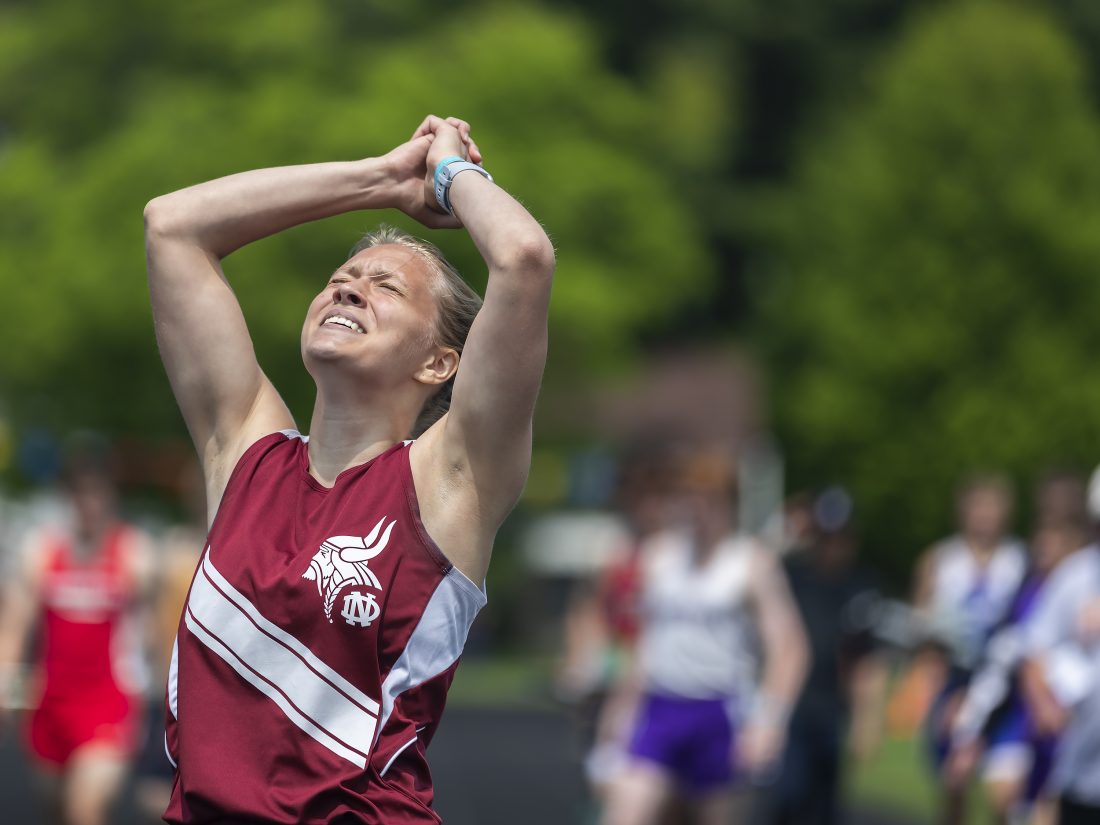 KINGSFORD — As she neared the finish line, the crowd’s cheers grew louder.

A look of exhaustion, concentration and desperation wrenched her face as she breathed hard and feet pounded the track.

When she crossed it, she glanced up into the crowd and when she saw her mom nodding, she knew she had it.

Masyn Alexa captured two firsts in the 200 and 400 dashes, setting school records in both to help the small North Dickinson team to a Division 3 runner-up finish at the MHSAA UP Finals on Saturday.

Alexa, a junior, won the 400 at 1:00.86. She eyed the clock as she crossed the line. She was just three-hundredths of a second short of the school record in practice earlier in the week.

“I wasn’t sure if I had it or not,” Alexa said. ” I knew I was close. I heard all the cheers as I went across. I didn’t know whether I had it or not. When I looked, my mom was nodding so I knew I had it.”

Alexa clasped her hands above her head and basked in the moment. Lake Linden-Hubbell’s Mariah Willmer, who took second, hugged her.

“I’ve been working to get that record for a long time,” Alexa said. “I ran high 1:01s three different times last year and once again this year. In practice two days ago I was three-hundredths of a second away from getting it. I was hoping today I could get it and I ended up getting it. My coach was at the 200 mark, marking my time as I came across. Then I knew what I was at so I could finish strong.”

A second-place finish was quite the feat considering the Nordics’ team was composed of just six girls, while Lake Linden-Hubbell, with 16 girls, scored 112 points and ran away with the Division 3 title.

“For a school with 85 kids in the high school, you couldn’t ask for much more,” North Dickinson head coach Mike Roell said. “These kids all year have been troopers and competitors. I like the way our program is going. We’ve got some young kids that are going to be really, really good.”

Alexa won the 200 at 27.00, breaking her own school record. She lost the 100 dash by a hundredth of a second behind Stephenson’s Amanda Starzynski.

Forest Park’s Mercedes Simmons was sixth in the 300 hurdles.

Kingsford’s Olivia Allen also had another big day. She set the school record in the 400 at 58.53.

“That was my fourth time winning the 400 dash (in the UP Finals),” Allen said. “I’ve been tearing up because it’s my last time. I’m never going to have to run the 400 again. I’m never going to run the 100 and 200. The one half thanks God. The other half, it’s sad because I always look at how good I did and what I could’ve done better. It’s hard being a senior, that’s for sure.”

“Olivia had an outstanding day. Great way to end a stellar four years of high school track,” Harry said. “I was extremely happy for her. She is a hard worker and I sure am going to miss her next year.”

Iron Mountain’s Tiana Brooks was eighth in the 100.

Jordan Shamion took first for the Wykons in the 100 hurdles and second in the 300 hurdles. Avery Bociek was fourth in the 1600. Zoe Kolenda was third in the 3200. Emily Nelson was third in shot put. McKenna Kegley was second in discus.

Khalajia Hannah took third for Norway in the 400. She was also third in long jump and seventh in the 200.

Ontonagon’s Holly Wardynski set the Division 3 UP Finals record in discus at 116 feet, 3 inches. Bark River-Harris’ Karrie Meyers set the mark at 115-7 in 2009.

Lake Linden head coach Gary Gusfredi, in his 19th year coaching the team, was all smiles for most of the day.

The Lakes had been close with other teams early on until results for field events came in. Three Lakes took each of the top three spots in pole vault. As the results were entered, the 24 points from the pole vault finish were paired with strong finishes on the track. That’s when the Lakes separated and padded their lead.

“I’ll tell you what: there are some girls on this team that refuse to lose,” he said. “We have kids on this team, juniors and seniors, that I’m not sure they actually lost other than maybe when the seniors were freshmen. The juniors were Copper Country champions as eighth graders. I’m talking beating Hancock and Houghton and all the bigger schools. Now they’ve won three UP Championships in a row and they’ll be seniors next year. Mariah Willmer’s outstanding. Makenzie LePage is a big point scorer for us. They don’t like to lose.

“They do thrive on situations like this. We’ve given them goals and set the bar up high and they just keep striving to reach that bar. I’ve never had a group over a three-year span do that.”