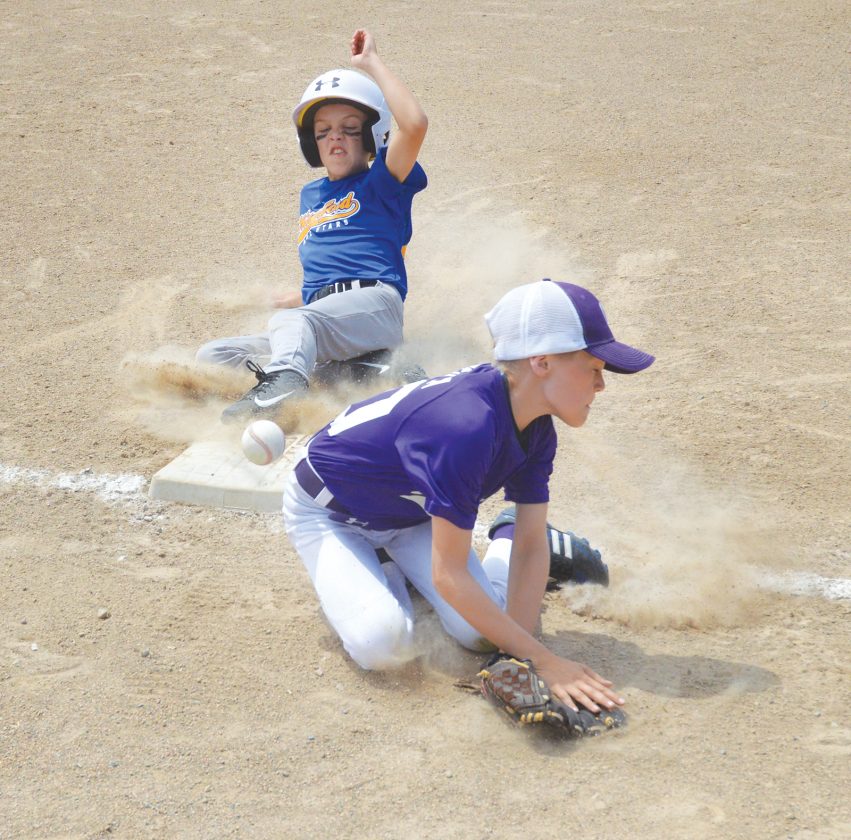 Kingsford's Bradly Steber (left) slides safely into third base as the ball gets away from Gladstone's Andrew Junttila during a Little League Minor boys District 10 game Sunday in Escanaba. (Austin Hemmingson/The Daily Press)

ESCANABA — It came down to the final out, but the Kingsford Minor Boys’ All-Stars (ages 9-10) are moving on in the Little League District 10 baseball tournament after escaping a late Gladstone rally for a 10-8 victory at Karl Dickson Field on Sunday.

The win sends Kingsford to the championship game against Escanaba at 6:30 p.m. EDT today. Escanaba capture the title with a win, however, Kingsford needs a win to force a winner-take-all game Tuesday night.

Trailing 10-7 entering the top of the sixth inning, Gladstone’s Quinn Carlson led off with a walk. Kingsford made a pitching change, bringing in Bradly Steber to replace Bradlee Bottesi, who had pitched the whole game. Gladstone’s Henry Sholten then drew a walk, and Landon Pepin singled to right field to score Carlson to make it 10-8. However, Sholten was thrown out at second base for the first out. After Braylin Carter struck out looking, Carter Sanville doubled to left to put runners on second and third with two outs. Xavier Leipzig then hit a fly ball to center on a 3-2 pitch, but Kingsford’s Carson Chrisman caught it to end the game.

“We were happy for our center fielder, Carson Chrisman,” Kingsford assistant coach Lance Doenier said. “He did a great job for us and we’re just happy he made the play to end the game with it. We’re just happy to come back after our loss yesterday against Escanaba, so we’re happy to win and really happy to move on.”

Kingsford manager Chris Steber was complimentary of his starting pitcher.

“Bradlee Bottesi did a hands-down amazing job,” he said.

“The four teams that were left all play good defense,” he said. “When you put one in the air, they all can catch it and you never know what’s going to happen. We had runners on second and third, fly ball to center field and their center fielder made a play. I give credit to Kingsford. They play tough defense and they made plays when they needed them to stay just ahead of us. In the end, we were just one or two plays short of pulling out the game. The kids did well.”

Gladstone — which reached Sunday’s contest with a thrilling 14-12 win over Iron Mountain North Saturday — opened the scoring in the top of the first on Leipzig’s two-run double, but Kingsford responded with four runs in the bottom half, then added three more in the second for a 7-2 cushion.

“Getting off to a good start is the best thing for our team,” Doenier said.

“It’s a game of momentum, so getting a start like that early on helps the players rally and get some momentum and keeps them in the game,” manager Steber added.

Gladstone responded with four runs in the top of the third before Kingsford added three more in the bottom half for a 10-6 cushion. Gladstone got one back in the fourth to trim its deficit to 10-7 before falling just short in the sixth.

“I always go back to the kids and how they keep their heads up, and how they stuck together as a team,” Sanville said. “They picked each other up. It seems like every game we’re in, we end up down, and that’s probably just part of being this age. They just never gave up.”

Bottesi earned the win on the mound over five innings for Kingsford, and Steber got the save. Ben Wilson absorbed the loss for Gladstone through one inning, and Andrew Junttila replaced him for the remaining four frames.

Kingsford now gets another shot at Escanaba, which won Saturday’s game over Kingsford 4-0 as Brody Ison threw a no-hitter.