Dantonio one win to record at MSU 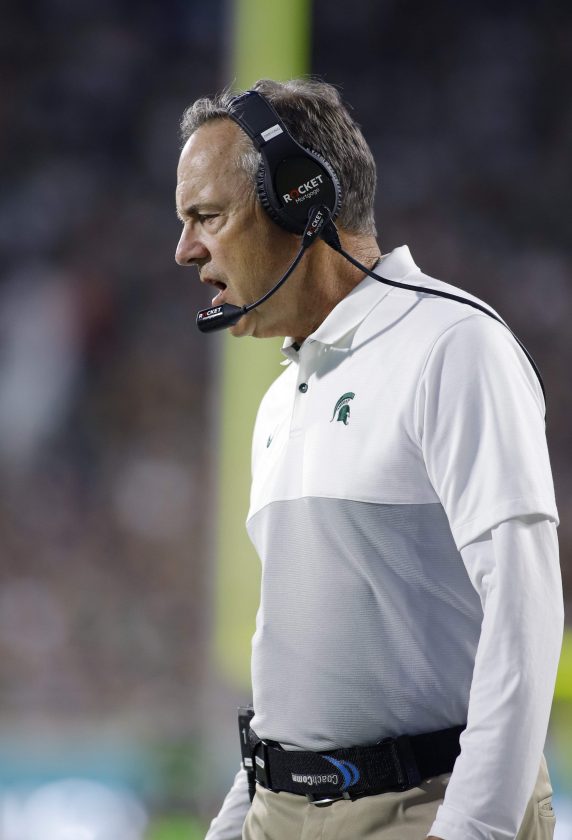 On the cusp of breaking Duffy Daugherty’s record, Dantonio said he is thankful for all the people on the field, sideline and behind the scenes that have played a huge part in his success.

“You don’t get to this point without the help and support of donors, administration, people who hired me, people who helped me along the way administratively, our players,” Dantonio said Tuesday following his weekly news conference. “I think of all the players who have come through here: the coaches, the continuity we’ve had as coaches, as teachers, not just as our coaches, but our staff, our trainers, our equipment people.

“There are so many people who make up a program of this size that I hope everybody takes a minute to sit down and say, ‘Hey, we’ve all done this together.'”

Dantonio matched Daugherty’s record of 109 wins while helping the 18th-ranked Spartans open the season with a 51-17 win over Western Michigan and a 28-7 victory against Tulsa.

His first shot to break the mark set in 1972 will come at home Saturday against Arizona State (2-0).

The 63-year-old coach will likely have a chance to win many more games this season and in the years to come, ending with a retirement he doesn’t expect anytime soon.

“I keep telling my players, ‘As long as you don’t give me too many problems — and the bar is high — I’m going to continue to do what I enjoy doing as long as I feel like I can be successful and impact people,” Dantonio said. “I think we can do that.”

Since 2007, he has turned a mediocre program into one good enough to claim three Big Ten championships, a Rose Bowl and earn a spot in the College Football Playoff. He is one of just four coaches in Big Ten history to win 11 games in at least five seasons to join a group that includes the late Joe Paterno, Jim Tressel and Urban Meyer.

Dantonio has also hit some lows, plummeting to a 3-9 record after being ranked No. 8 early in the 2016 season. An ESPN report also questioned how Dantonio dealt with allegations against his players and he publicly and privately defended how he handled all complaints in the wake of a campus crisis regarding the school’s handling of allegations against former sports doctor and convicted molester Larry Nassar.

Shortly after beating Notre Dame in 2010, he had a mild heart attack.

“In 13 years, there’s going to be challenges,” Dantonio said. “I say all the time to my players and coaches, ‘Everybody is going through some type of challenge.'”

Dantonio challenged his players last week at his news conference, lashing out at them for lacking effort and toughness in the season-opening win over Tulsa.

“Well, if you feel that was fire last week, you should have been at the team meeting,” he told reporters. “Sometimes you just have to deal with the brutal reality of things, and you have to call them as you see them and that’s the way I called it.”

Dantonio, though, was quick to say at his players are the ones who deserve credit for bouncing back with a confidence-boosting blowout against Western Michigan.

Here’s what to watch in the Big Ten this week:

GAME OF THE WEEK: Pittsburgh at No. 13 Penn State

This is the 100th edition of the Keystone State Clash since 1893 and final one under the current scheduling agreement. Penn State (2-0) won last year’s game at Heinz Field 51-6 in the rain and has outscored the Panthers 84-20 the last two years. Sean Clifford leads a Penn State offense averaging 515 yards per game. Pitt’s defense should provide Clifford his toughest test before Big Ten play begins. The Panthers (1-1) are looking for their first win in Happy Valley since 1988.

Iowa (2-0) has won four straight in the Cy-Hawk Series and outscored its first two opponents by a combined 68-14. Hawkeyes QB Nate Stanley has been sharp so far, having thrown six touchdown passes and no interceptions. The Cyclones (1-0) are coming off an open date following their triple-overtime win over FCS Northern Iowa. The atmosphere will be charged with ESPN’s “College GameDay” making its first visit to Ames.

The Huskies went into Lincoln and beat the Mike Riley-coached Cornhuskers two years ago, and second-year coach Scott Frost’s team looks vulnerable after winning a closer-than-expected opener against South Alabama and losing in overtime at Colorado after blowing a 17-point lead. The Huskies played No. 11 Utah tough into the second half last week.