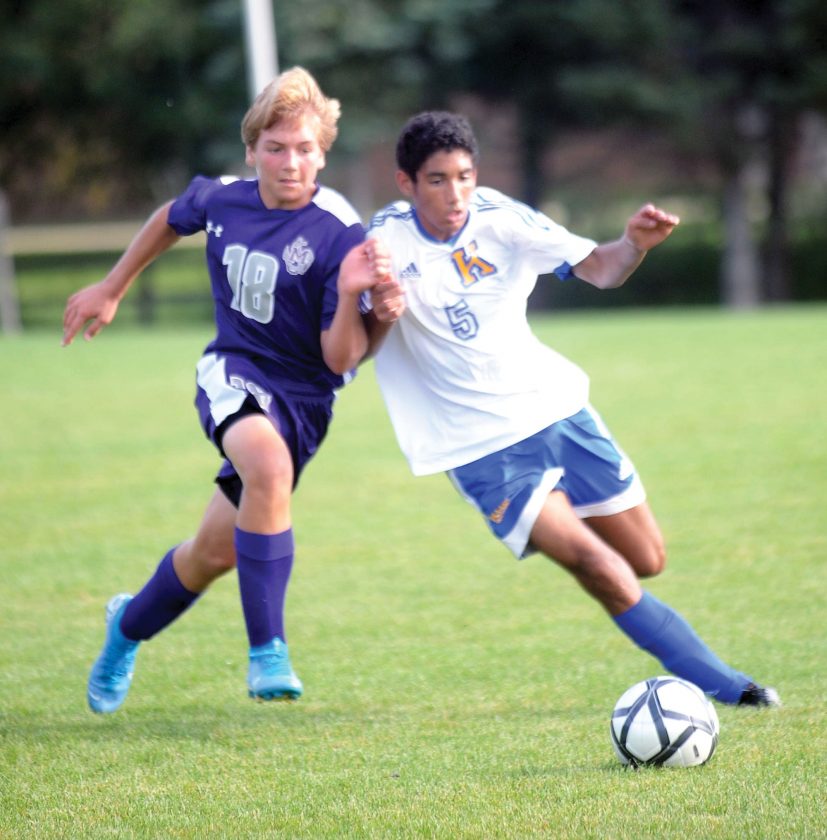 MARINETTE — The Marinette boys soccer team was feeling under the weather but penalties proved to be the perfect medicine, with three penalty kicks proving to be the difference in a 4-3 come-from-behind victory over Kingsford Tuesday.

“Some of our players weren’t 100 percent fit today,” Marinette coach Frank Pohlmann said. “We have quite a few who have a bit of a cold or are dealing with a stomach issue, so there was a little concern but everyone pulled together. Everyone who went out with a cramp wanted to get back in as soon as possible.”

Kingsford is a senior-laden team that isn’t afraid to get their jerseys dirty, which provided the young Marines with a stiff task.

“Kingsford is a team that plays extremely physical and that never makes for a pretty game,” Pohlmann said. “We are on average two years younger than they are, so we are not on that level yet but we played our game.”

Trailing 3-1 at the beginning of the second half, Noah Cegelski was fouled and promptly nailed his first penalty kick to cut the deficit to 3-2.

Marinette (3-0) continuously drove into the penalty box in the second half, using the Flivver’s aggressiveness against them to draw two yellow cards and three total penalty kicks. Pohlmann said the Marines executed their game plan to perfection in the second half.

“We wanted to do it in the second half exactly as we did,” he said. “We had 45 minutes and we knew that we didn’t need to score right away.” All three penalties we got were called in the box and if you’re up 3-1, it’s very difficult not to think that you’ve won. Then we scored and made it 3-2 and you could see that they got jittery and they resulted to extremely rough play that, in the end, did us more good than them.”

On two occasions, Kingsfor was issued yellow cards, which brought Cegelski to the line for two more penalty kicks that he successfully converted to give Marinette the 4-3 advantage that would hold until the final whistle.

Cegelski may get the glory for scoring the goals, but Pohlmann was quick to point out that he didn’t do it alone.

“Obviously the credit goes to the one who scores the goal but it should also go to Dominic Smerchek and Kadin Sinks for creating the penalties,” he said. “We said that whenever we got a ball up front we needed to move quickly and get into the penalty box because of Kingsford’s physical play.”

Pohlmann also knew that Cegelski would be taking any other penalty kicks after drilling the first one.

“Once someone takes a kick and makes it, it’s a tremendous boost. I had no doubt for the second and third that he would make it again,” he said. “Noah mixed it up nicely. He had two scores to the right of the goalie and one to the left. If we had two more kicks, he would have made them too.”

Things weren’t looking so rosy for the Marines in the first half.

Kingsford (1-1) jumped to an early 1-0 lead off a Dan Hellman goal that was assisted on by Kobe Gordon before Marinette was able to knot the game up on a goal from Keegan Polomis with an assist from Kadin Sinks.

Kingsford kept control of the ball and limited Marinette’s possessions while attacking the net on offense. Aaron Tickler was able to make a few diving saves for the Marines before the Flivvers pushed another goal into the net off the foot of Ben Backlund to take a 2-1 lead.

Backlund scored again as time expired at halftime to make it a 3-1 game. Pohlmann said that a scoring situation similar to Kingsford’s last goal isn’t something Marinette will have trouble with again.

“It was a downer because 2-1 is a lot different than 3-1 going into halftime,” he said. “That shot was a little bit the result of our inexperience because he got the possession with only eight seconds, ran for five seconds and scored. Usually we try to stop him in his stride and disrupt his rhythm. A little contact would have done the trick there.”

It may not have been the prettiest win, but Pohlmann isn’t splitting hairs when it comes to winning in the manner that Marinette did.

“It’s an amazing feeling to win when you’re down 3-1 at halftime,” Pohlmann said. “I can’t say enough about the energy and sheer willpower we showed in the second half. Anytime you win with the other team having three penalties, it’s a bit of a lucky win but it’s a great win for morale. They kids are extremely proud of the fact that we’re 3-0.”

The Flivvers host Marquette this evening at 5 p.m. at Commemorative Field.