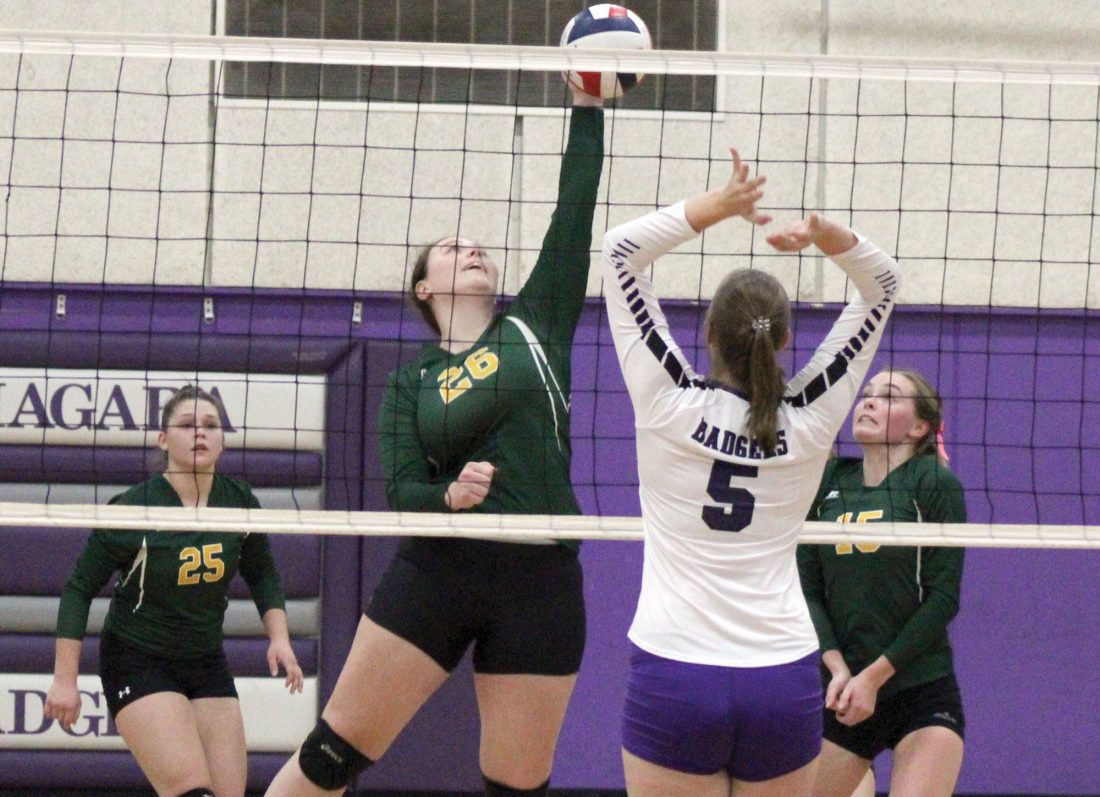 In what were five highly-contested and exciting sets, the No. 5 seed Bobcats simply out-served the No. 4 seed host Badgers. Niagara didn’t serve badly by any means, Florence simply served a little better.

“We knew going in to the match tonight, that serving was going to be our deadliest weapon,” said Florence head coach Joan Canfield said. “Jordyn Springer’s jump serve, it’s worked great for us all season as it did tonight. Sidney and Morgan Tomczak were awesome tonight as well with their serving. Niagara is a tough opponent, we knew we’d have to set well tonight to go along with our serving. Because we knew the tip game wouldn’t work against them.”

In the first set, Springer and Tomczak led the way with each recording four-point serving runs. Julia Brown, who recorded a five-point run of her own, led the way for Niagara during the set.

The “win by two” rule showed itself in the second set. Back and forth the set went, basically throughout, but especially in the latter stages. Freshman Morgan Borchardt was serving when the Badgers went on a seven-point scoring run, going from trailing 15-12, to taking an 18-15 lead. The set ended with an impressive kill by Jasmine Racine to seal the set win for Niagara 29-27.

Niagara was simply the more consistent team in set three. The set began with Badgers libero Faith Borchardt serving Niagara to a 7-1 lead with a six-point scoring run. With the score knotted at 12, Alyssa Cretton took the ball and served her team to a 16-12 lead, a lead they wouldn’t relinquish, going on to win the set.

Set four began with a serving duel. Sidney Tomczak for Florence and Faith Borchardt for the Badgers had five-point runs almost in succession. The difference in this set was Springer, and her jump serve.

The final set was as competitive as the second. Florence led 6-2 early on, only to see Niagara fight back to tie the score at 8-8. The scoring went back and forth, and in the end of the 15-point set, the Lady Cats prevailed, to win the match and advance in the state tournament.

“In the beginning, and throughout most of the night, our passing wasn’t too great. We also had to many service errors at first” said Niagara head coach Carol St. Arnauld. “We made some key mistakes late in the game, mistakes that gave them points, and it put our backs against the wall.

“Hats off to Florence, they came to play and I knew they would. They probably wanted to return the favor for us beating them in five sets at their place last season in round two. This one stings. I feel terrible for our seniors, they wanted it. I want to give credit to my seniors for their hard work and their leadership this season. I am going to miss them.”

Canfield expressed that “we owed them one from last year” in reference to the defeat that St. Arnauld noted from last year’s WIAA tournament. It was great to see the respect each coach and team had for one another’s programs, despite being rivals.

Florence moves on to the second round and will travel to No. 1 seed Three Lakes Thursday night at 7 p.m. Three Lakes cruised past No. 8 seed Phelps in three sets. Canfield noted that the Bobcats lost both times they faced the top-seeded Blue Jays during their Northern Lakes Conference season.

“We fought hard in both matches, but came up short. They have some awesome jumpers and blockers. But we’ll have something up our sleeve for them,” Canfield said.

The noise, excitement and enthusiasm in the crowd and student sections was great throughout the entire five sets.