Flivvers get back to even 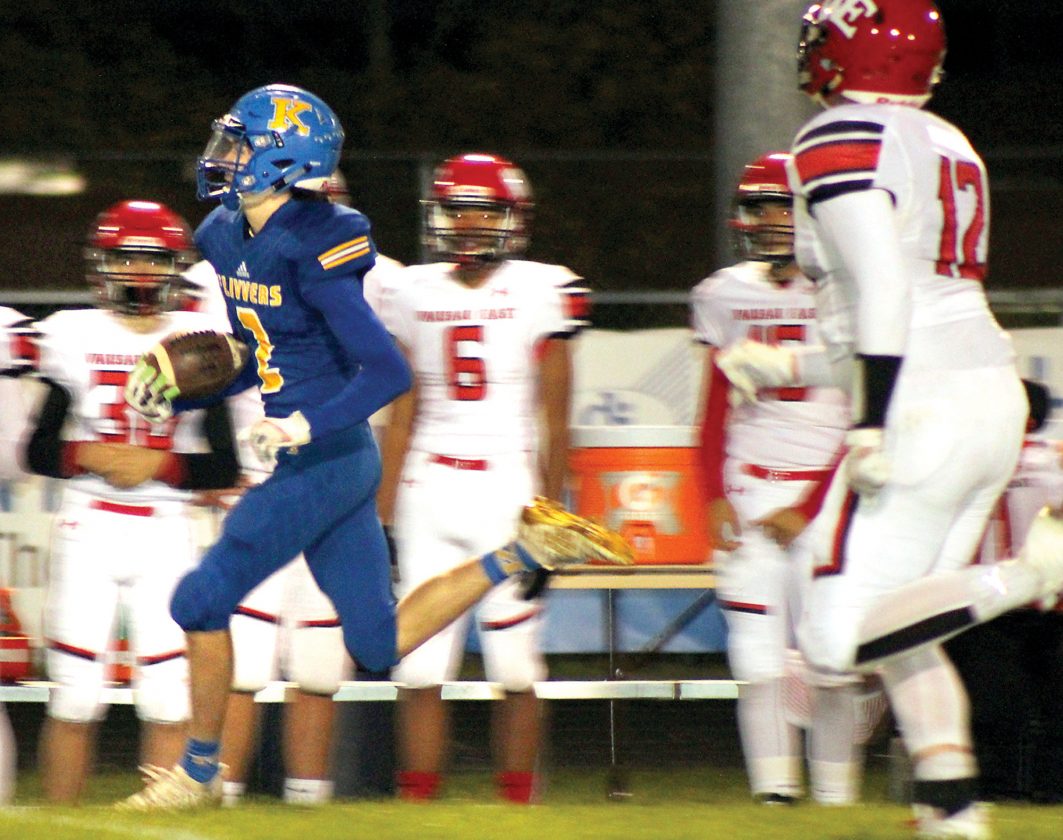 KINGSFORD — Wausau East was in a giving mood early Friday evening at Flivver Field and Kingsford took advantage on its way to a 32-7 non-conference victory that evened its record at 3-3 on the season.

The Lumberjacks (3-4) struggled on special teams early, coughing up the ball and points on three of the game’s first four kickoffs.

Will Nash mishandled the game’s opening kickoff, setting up Kingsford first and goal inside the 10 thanks to Ethan Batti’s recovery. Tyler Kopp found Logan Normand on fourth and goal from the seven for the game’s first points.

Wausau East answered on the next drive with its biggest play of the game as Sam Moses found a hole up the middle of the field and busted loose for a 58-yard score.

But the Lumberjacks’ 7-6 lead lasted only seconds, as Chris Carollo took the next kickoff 79 yards to paydirt, finding a seam on the right side and motoring untouched down the sideline to the end zone.

Another Nash miscue on the ensuing kickoff gave the ball right back to Kingsford. The Flivvers couldn’t cash in on that drive, as Kopp

was picked off on a third and six from the 11, but the Flivvers defense returned the favor right back when Kopp intercepted Lumberjacks quarterback Matt Heinrich as Wausau East was threatening to cross midfield.

That pick did lead to points, as Kingsford used eight plays to go 65 yards with Carter Kreski plowing up the middle from three yards out for the score. Kreski finished with 41 yards on 11 trips.

A seven-play, 58-yard drive midway through the third quarter gave the Flivvers some breathing room. Kopp threw across the middle to Hunter Bilgreen and hit him in stride as he crossed the goal line. Normand’s kick pumped the Flivvers’ advantage to 25-7.

Kingsford turned to Caleb Boone on the ground in the fourth quarter, and he capped a seven-play, 65-yard drive with a sweep around the left side for a seven-yard touchdown to put the game officially out of reach.

Despite being out gained 241-197 in total offensive yards, the Flivvers defense held stout after the early breakdown and made life miserable for Heinrich, who was sacked four times for a total loss of 36 yards. Lucas Tappy, Lance Waise, Bilgreen and Ben Stanish all contributed sacks.

“The defense did really great,” Novara said. “We got some turnovers and sacks. Our defense has been improving each week and been playing pretty well of late.”

Kingsford did struggle to gain traction on the ground. The Flivvers picked up 26 of their 71 on their final drive of the game.

“We still have to run the ball a little better,” Novara said. “That’s kind of our Achilles’ heel, but we’re getting better. We’re going to keep working on it.”

Even though they were bottled up on the ground, the Flivvers were able to make the plays they need to make in the passing game. Kopp was 9-of-17 for 107 yards and his two touchdowns. He also caught a 19-yard pass on a fourth and nine gadget play to keep Kingsford’s second-quarter scoring drive alive.

More importantly alive are the Flivvers’ playoff hopes with three games left to play in the regular season.

“We needed that one,” Novara said. “It puts us right back in the conversation. So we’re excited.”