Mountaineers dispatch Hancock 42-6; off to best start since 2011 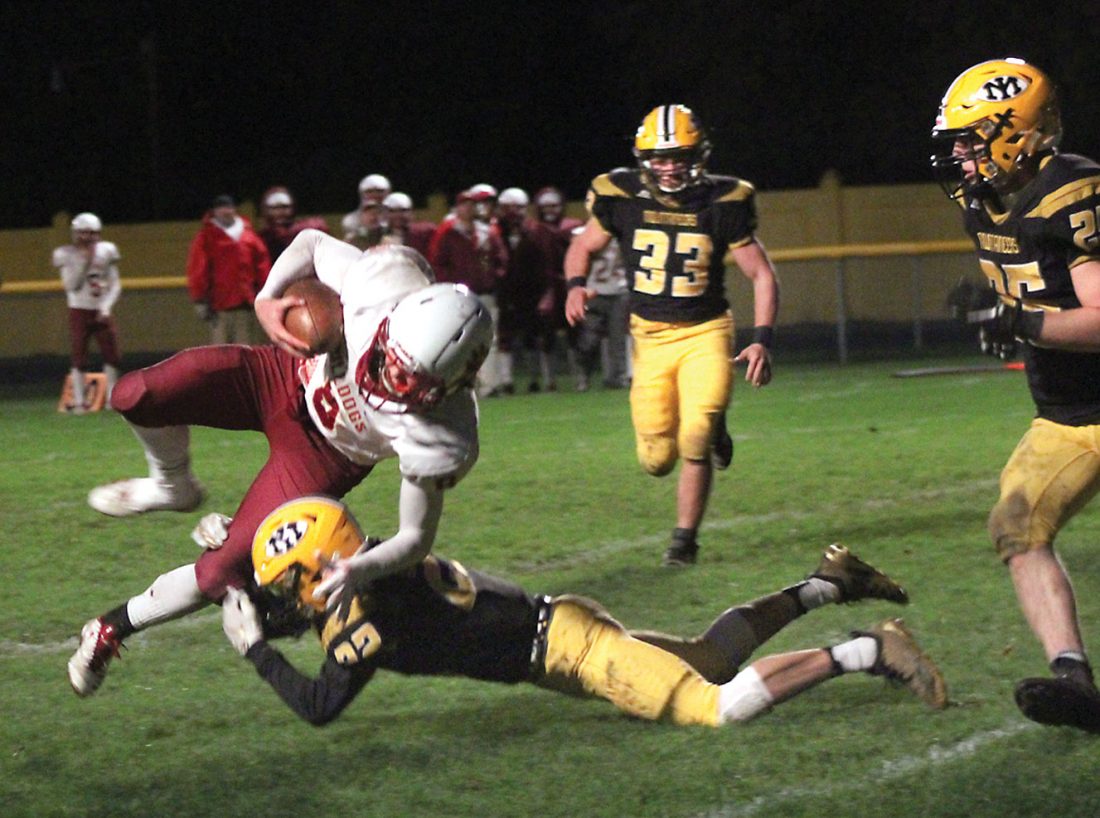 The Mountaineers (7-0, 5-0) produced 391 yards of offense. Evosevich-Hynes carried 13 times, amassing a large chunk of his ground total with a 73-yard score on the first play of a Mountaineer drive late in the third-quarter. He broke off a 14-yard tally in the final minute of the first half on a fourth and two as Iron Mountain answered Hancock’s only scoring drive to build a 21-6 advantage at the half.

Evosevich-Hynes also hauled in a 42-yard bomb from Johnson early in the second quarter that helped Iron Mountain to a 14-0 lead. Johnson first rolled to his right but had to switch direction to avoid pressure. Throwing off-balance on the run, and across his body, Johnson heaved it down the left sideline to the goal line where Evosevich-Hynes won a jump ball with the Hancock defender.

Johnson was 10-of-12 passing, also finding Bryce Pietrantonio for a 14-yard strike for the game’s final score. Pietrantonio also had a one-yard rushing TD.

“He passed the ball very efficiently,” Marttila said. “He scrambled when he needed to, made the right play. His ability to extend the play puts too much pressure on the defense. Anytime you go 10-for-12 with 154 yards, that’s huge for our football team.”

The Mountaineers scored on every possession except their first and last, the final drive conducted with most of the starters on the bench and ending in the victory formation.

Hancock quarterback Austin Salani connected with Connor LeClaire for an eight-yard score after the Mountaineers built their 14-0 lead. The Bulldogs drive went 65 yards on 15 plays. Salani was 5-of-12 passing for the night, but had several balls dropped by his receivers.

Not only did Iron Mountain answer the Hancock touchdown before halftime, the Mountaineers had the ball first in the third quarter and marched 65-yards on 16 plays with Pietrantonio’s plunge capping the drive to really widen the margin.

“We definitely had our chances,” Hancock head coach Ramon Sague said. “We didn’t make some plays on offense. We had some opportunities there. We had a few dropped passes. We missed assignments blocking. But, we played real hard in the first half and I thought we had an opportunity there to really stay in the game. Once they got that first touchdown in the second half that really took the wind out of our sails. That first drive of the second half was really big.”

“They are a scary team with their athletes in space, and No. 8, he throws a really nice ball,” Marttila said. “We did a better job of pressuring the quarterback in the second half. Credit our kids for that.”

Iron Mountain’s first touchdown was a three-yard run by Burklund. The Mountaineers had a short field for that scoring drive, taking over on the Hancock 40 and needing just five plays to get on the board.

“We thought heading in that we matched up with them pretty well from a physical standpoint,” Sague said. “They really came off the ball well and their quarterback used his feet to break contain. And we talked all week about not letting him get outside. Once he got outside, we were in big trouble in the secondary.”

The Mountaineers head to L’Anse next Friday. Hancock (4-3, 2-3) heads to Calumet.

“All in all, we did some good things on both sides of the ball,” Marttila said. “I’m happy for our kids and happy to get to 7 and 0.”