Fall Classic returns to DC for first time since 1933 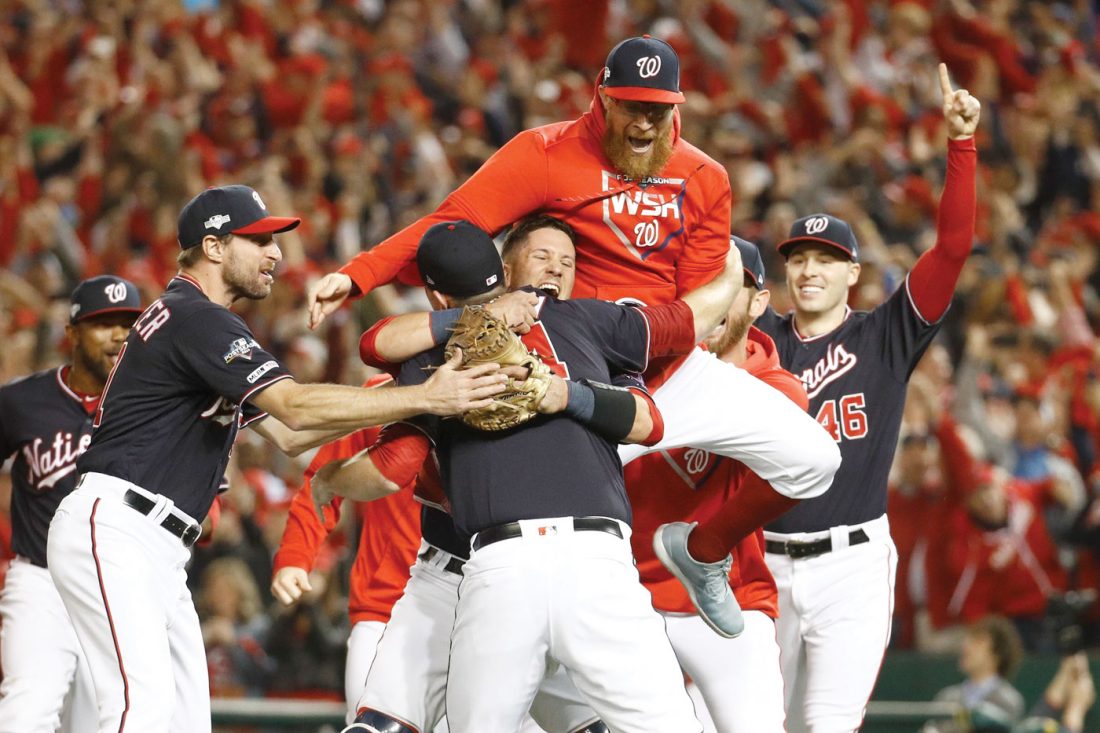 WASHINGTON (AP) — As the Washington Nationals moved a party 86 years in the making from their ballpark’s infield to a booze-filled clubhouse, manager Dave Martinez paused near the dugout and thrust the silver NL Championship Series trophy overhead, to the delight of loud, delirious fans still in the stands.

Who would have thought this was possible five months ago, when the team was flailing, trade talk was swirling around Washington and folks figured Martinez’s job was in jeopardy?

From 19-31 during a mediocre May to the Fall Classic in an outstanding October — and the city’s first World Series appearance since 1933.

Extending their stunning turnaround, the wild-card Nationals got RBIs from middle-of-the-order stars Anthony Rendon and Juan Soto in a seven-run first inning Tuesday night, and Patrick Corbin’s 12-strikeout performance plus a trio of relievers helped hold on to beat the St. Louis Cardinals 7-4 in Game 4 to complete a sweep in the NLCS.

Right from the first inning Tuesday, most in a sellout crowd of 43,976 rose from their seats to applaud or yell or twirl their red towels, to chant “Let’s go, Nats!” and “M-V-P!” and various players’ names, enjoying every moment of that game-deciding outburst.

And then, a couple of hours and several innings later, as Tanner Rainey, Sean Doolittle and Daniel Hudson were protecting a shrinking lead, those same spectators stood and shouted and reveled some more.

Now the Nationals get plenty of time to rest and set up their so-far terrific rotation before beginning the last series of the season against the Houston Astros or New York Yankees in a week.

The Nationals became the fourth team to reach the World Series after being 12 games under .500.

“We think we can compete with any team, any time,” NLCS MVP Howie Kendrick said. “People always get caught up in the things that are on paper, but the reality of it is you have to go out and play. Once we get out on the field, anything can happen.”

The last time the World Series came to the nation’s capital, more than eight decades ago, the Washington Senators lost to the New York Giants in five games. Have to go even further back, to 1924, for the city’s lone baseball championship, when the Senators defeated the Giants.