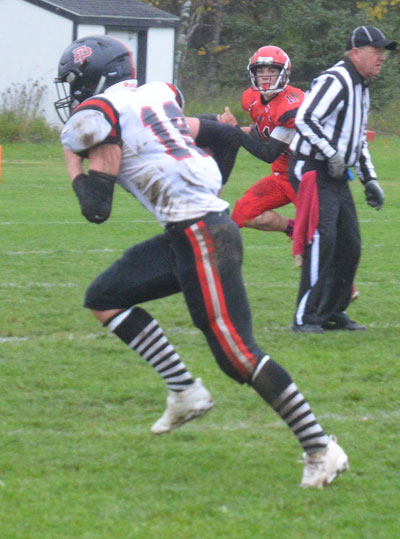 POWERS — It was closing in on a mud bowl here Saturday as the North Central football team and the Forest Park Trojans slogged through the rain. The top-ranked Jets slid past the third-ranked Trojans 34-8 to remain unbeaten and all but lock up home field advantage throughout the eight-player playoffs.

The rain continued into the second half as the Jets led 18-8. Neither team made much progress in the third quarter with the rain turning holding onto the ball a risky proposition.

With less than three minutes left in the quarter, Forest Park recovered a Jets’ fumble on its own 27. However, North Central’s defense continued to hinder the Trojans, and two minutes later, the Jets’ Luke Gorzinski hauled in an interception to give them the ball on the Forest Park 41. An unsportsmanlike conduct call on the Trojans after the play put the Jets (6-0) within reach of another touchdown.

Seven seconds into the fourth, North Central’s Noah Gorzinski carried it 26 yards into the end zone, and a successful two-point conversion put the Jets ahead 26-8.

“(The game) was a matter of perseverance,” Jets’ coach Leo Gorzinski said. “(Forest Park) blitzed us a lot in the first half, and the weather contributed to that. We were having a bit of a tough time with our speed offense handling it, but our kids stay with it. They keep coming, and they keep going down after down.”

Luke Gorzinski cut Forest Park (4-2) off again on its next drive, snagging another interception to put the Jets on their own 42 with 10:45 left in the fourth. A little less than minutes two later, North Central’s Cole Timblin punched one in from the 10-yard line. Another successful two-point try gave the Jets a 34-8 lead and sealed the game.

“Weather affects both teams, and it neutralizes a lot of things both teams can do,” Trojans’ coach Dave Graff said. “In order for us to compete with a team like North Central, we’ve got to execute and minimize mistakes. We just had way too many mistakes. Sure you can blame the weather, but we need to take care of the ball better.”

The weather showed its presence just 1:12 into the first quarter when the ball slipped out of North Central’s hands and into Forest Park’s. The Jets defense showed their mettle, however, and limited the Trojans to a three-and-out after the turnover.

“We knew that our play style was more suited to good weather,” coach Gorzinski said. “So, this was a huge game. It helped us tremendously getting to see this, so that our guys could bear down on the ball and play smash-down football.”

On North Central’s next drive, Noah Gorzinski broke away from his defender and hauled in a pass from Luke Gorzinski for 61 yards and a TD with 7:52 left in the first.

The Jets recovered a fumble by Forest Park on the next possession to set themselves up at the Trojans’ 16-yard line, and a pass to Noah Gorzinski for another TD made it 12-0.

Forest Park’s sole TD came with three minutes left in the first on a two-yard run by Gabe Scarlassara.

“Defensively, in the second quarter, we started picking up our game,” Graff said. “I was a little disappointed in the first quarter with how quickly we gave up two scores.”

The Jets added one more in the second on a 28-yard catch from Leo Gorzinski Jr.

“You look at momentum, and we gave up a long touchdown pass to (Gorzinski Jr.),” Graff said. “I think that was a big one. We were stuffing the running game, and things were looking like we were going to be where we want to be. But they completed that pass, and it shifted things.”

Scarlassara led the Trojans’ offense with 70 yards on three catches and 29 yards on 16 carries and one TD. Tommy Peltoma went 8-for-13 for 109 yards, two interceptions and 16 carries for 49 yards.