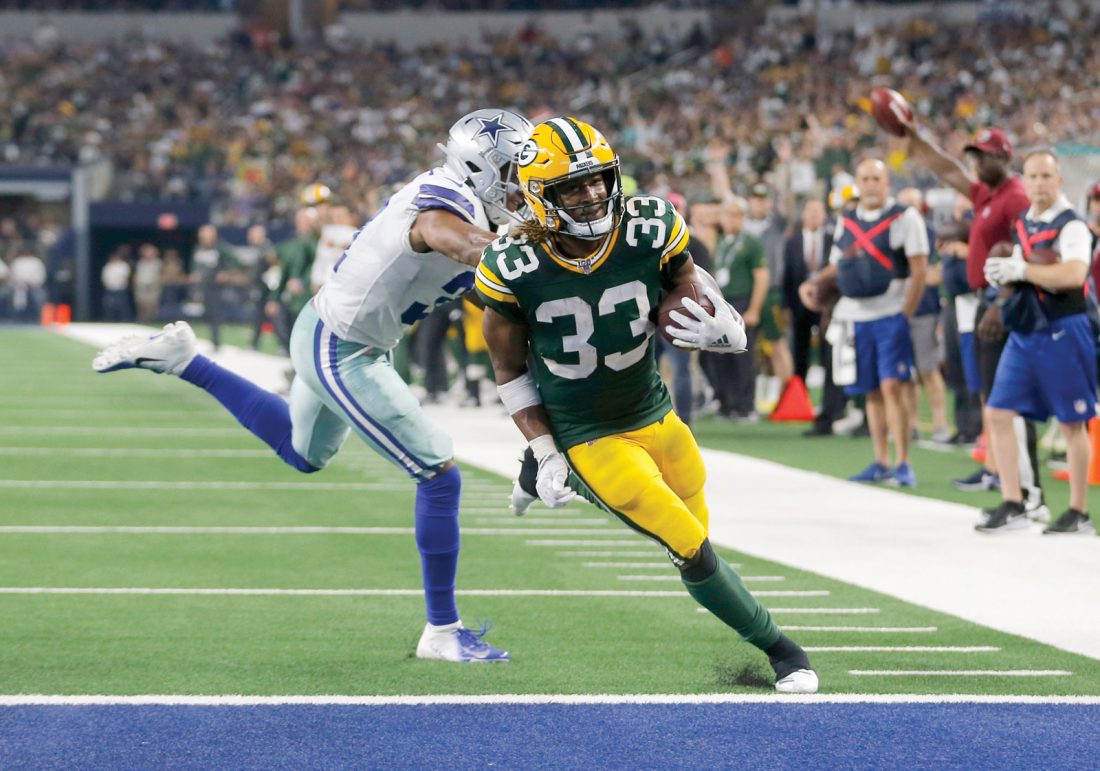 AP Photo GREEN BAY’s AARON Jones reaches the end zone for a touchdown in front of Dallas’ Byron Jones during the second half Sunday.

ARLINGTON, Texas (AP) — Aaron Rodgers darted toward the line of scrimmage before flinging a ball sidearm for another dazzling completion at the home of the Dallas Cowboys.

The “Aarons” were quite comfortable in a 34-24 victory over the Cowboys on Sunday — Rodgers because he won again at AT&T Stadium nine years after his first victory in the retractable-roof stadium was the 2011 Super Bowl, Jones because the West Texas kid felt right at home.

“All my family was up in the stands,” said Jones, who grew up a Cowboys fan about 600 miles away in El Paso and played for the hometown UTEP Miners. “I could see my brother right there. I threw him one of the balls when I scored. That was pretty cool. Just being back in Texas.”

Rodgers zipped that sidewinding toss to Robert Tonyan in tight coverage along the sideline to fix one broken play, flipped a left-hander to Tra Carson to rescue another, and helped Green Bay improve to 5-0 at AT&T Stadium.

The first three Green Bay wins over the Cowboys at their 10-year-old stadium were all dramatic, highlighted by Rodgers’ improbable 35-yard completion to Jared Cook to set up a winning field goal on the final play of a 34-31 divisional-round playoff win three years ago.

“I’ve had some good games here,” said Rodgers, who was injured when Matt Flynn rallied the Packers to a 37-36 win after trailing 26-3 in the second half six years ago. “Four good ones.”

Not quite the same drama this time after the Packers (4-1) built a 31-3 lead, although Dak Prescott (463 yards passing) and Amari Cooper (226 yards receiving) set career highs trying to keep things interesting in the fourth quarter.

The last hope for Dallas ended with 1:41 left when Brett Maher missed his second field goal — a 33-yarder that would have given the Cowboys a shot at an onside kick down seven.

Missing his biggest threat in Davante Adams because of a toe injury, Rodgers threw for 238 yards without an interception — to the delight of a large contingent of Green Bay fans that pulled off several “Go Pack Go” chants without much resistance from the home crowd.

Prescott, on the other hand, matched a career high with three interceptions, although the first was a drop by Cooper on what should have been a big play early.

The Cowboys (3-2) lost their second straight game and dropped into a tie with Philadelphia atop the NFC East after winning their first three, just as the Packers had done.

Green Bay, also coming off its first loss, took sole possession of first in the NFC North with Chicago’s 24-21 loss to Oakland. The Packers opened the season with a win over the Bears.

“Preseason, they were talking about Chicago as a playoff team,” Rodgers said. “A tough team with that defense. Then come here, the team has Super Bowl aspirations, which they should, because they’ve got a great quarterback and great defense. To be 4-1 and first in the division is a real accomplishment.”

Jones had a career-high 182 scrimmage yards — 107 rushing and 75 receiving — and opened the scoring with an 18-yard run after being held to 19 and 21 yards rushing the previous two weeks.

On the touchdown that surpassed his previous career high of two and gave Green Bay a 24-0 lead early in the second half, Aaron Jones gestured toward Byron Jones while beating him to the pylon on a 5-yard run. The fourth TD was a 1-yard plunge.

Jones had exactly twice as many scrimmage yards as two-time rushing champion Ezekiel Elliott, who finished with 62 yards on the ground after the Cowboys had to abandon the part of the game their offense is built on to try to erase the four-touchdown deficit.

“I think I made a pretty big statement, showing what kind of running back I am and what I can do,” Jones said. “I feel like I did go toe-to-toe with him.”