Back at Michigan, Howard begins a new challenge 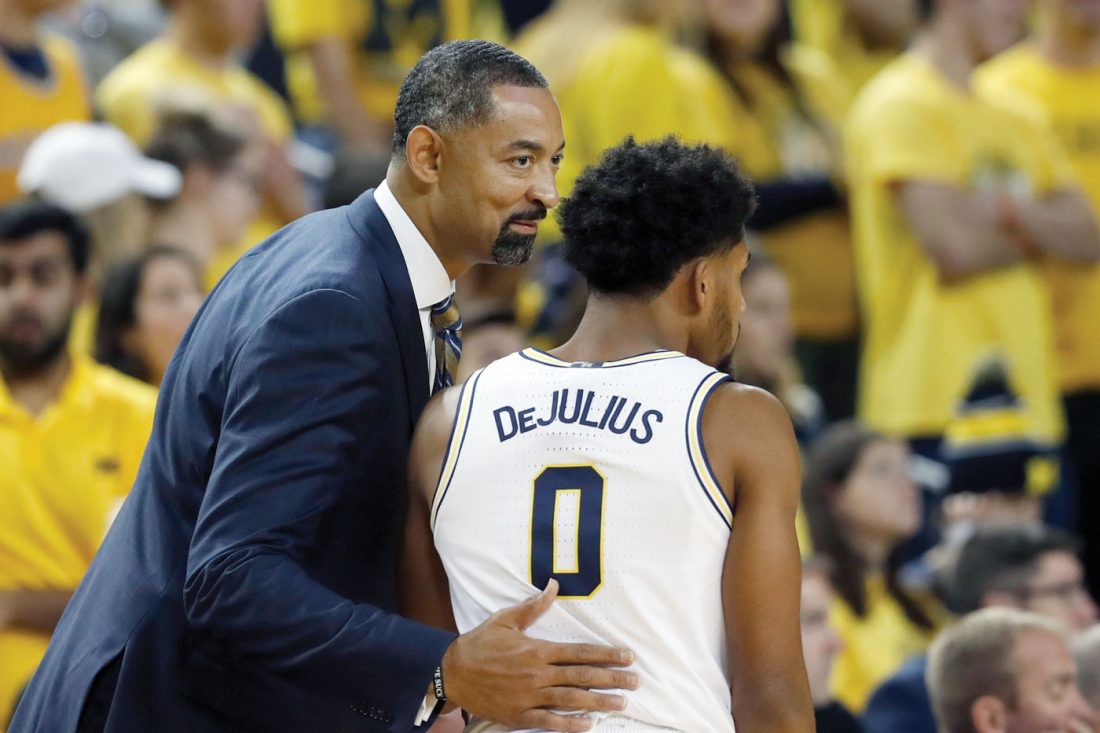 ANN ARBOR, Mich. (AP) — Juwan Howard was musing recently about the state of college basketball when the new Michigan coach interrupted himself.

“Why waste the time? I don’t have the energy for it,” Howard continued. “I’m trying to coach a team.”

This may become a theme during Howard’s first season at the helm: There will be plenty of talk about his past accomplishments as a player, but the former Fab Five standout will be focused on his new challenge. Brought back to Michigan after John Beilein’s departure, Howard has to replace the winningest coach in the history of the program.

While some nostalgia is inevitable, he’ll ultimately be judged on whether he can keep the Wolverines moving in the right direction — whether Juwan Howard the coach can lift his team the way Juwan Howard the player did.

Howard won his opener at Michigan on Tuesday night, 79-71 over Appalachian State. Fellow Fab Fivers Jalen Rose and Jimmy King were there to show support. The Wolverines led by 30 in the second half, then let that lead dwindle all the way to five in the final minute, presenting Howard with his first near-crisis. The team won but left plenty of room for improvement.

“I feel extremely comfortable and confident, as being the leader of this team,” Howard said after the game. “I think there’s some areas that not only just our players have to improve on, but me as a coach. That’s a part of the process. I cannot separate myself from the group.”

Beilein left Michigan to take over the Cleveland Cavaliers in May, and at that point, the college basketball coaching carousel had already gone through its usual rotations. There was no obvious choice to come coach the Wolverines, but Howard was an assistant with the Miami Heat, had strong ties to Michigan and had been considered a candidate for a head coaching job in the NBA.

So Howard came back to Ann Arbor. He was emotional at his introductory news conference, and nobody can doubt his passion for this school.

“When Beilein left, it was going to be hard to fill those shoes. But, they made a great decision in picking Juwan Howard,” said Ray Jackson, another of Howard’s Fab Five teammates. “I think recruits are going to keep rolling in.”

Indeed, selling Michigan and relating to players could be second nature to Howard — and he had a lengthy NBA playing career that could give him credibility with recruits.

“I was a player here before I played at the highest level. I can understand exactly what it takes for the student-athlete on where they’re trying to go, whether it’s in basketball or to be a professional in life, as their own CEO,” Howard said. “Been there. I’ve done all that. I think the relationship is there, and they see it. They see I’m as genuine as they come, but I’m also a guy that’s going to hold them accountable at times when things are not going right.”

Howard said he drove to Cleveland recently to meet with Beilein, the coach who brought Michigan back from an extended funk and took the Wolverines to the Final Four in 2013 and 2018. Michigan doesn’t just have a new coaching staff. The Wolverines also lost Iggy Brazdeikis, Jordan Poole and Charles Matthews, all of whom left early for the NBA draft.

Howard does inherit one of the team’s undisputed leaders in point guard Zavier Simpson, as well as sharp-shooting forward Isaiah Livers and 7-foot-1 Jon Teske. There’s enough talent on hand to ease Howard’s transition — but enough question marks to keep expectations manageable, at least at first.

“He’s a big relationship guy. He talks with everyone. He’s embracing every single moment — not just about basketball, about other things. Everyone can open up and talk with him,” Simpson said. “During some bumpy roads through the season … we’re going to need that strong connection between our coaches and our players.”

When Howard played at Michigan, the focus was on his connection with another group of players. The Fab Five made college basketball history when that group of Wolverines reached the national title game as freshmen in 1992. They were national runners-up that year and again in 1993. What Howard, Chris Webber, Rose, King and Jackson accomplished still resonates a quarter-century later, although their legacy at Michigan is complicated because of NCAA violations involving Webber.

This reunion between the Wolverines and Howard means the Fab Five might become a topic during just about any Michigan broadcast, and the new coach can expect support from his old teammates. Jackson said he can’t wait to come to some games, and King said he’s seen the team practice.

Those former players are excited, needless to say, but they’re also mindful of the fact that this is now Howard’s show.

“I will probably be the most consistent visitor because I live here,” King said. “We have not discussed a date for all five of us to get there because the focus is on Juwan. Everything else is ancillary at this point.”