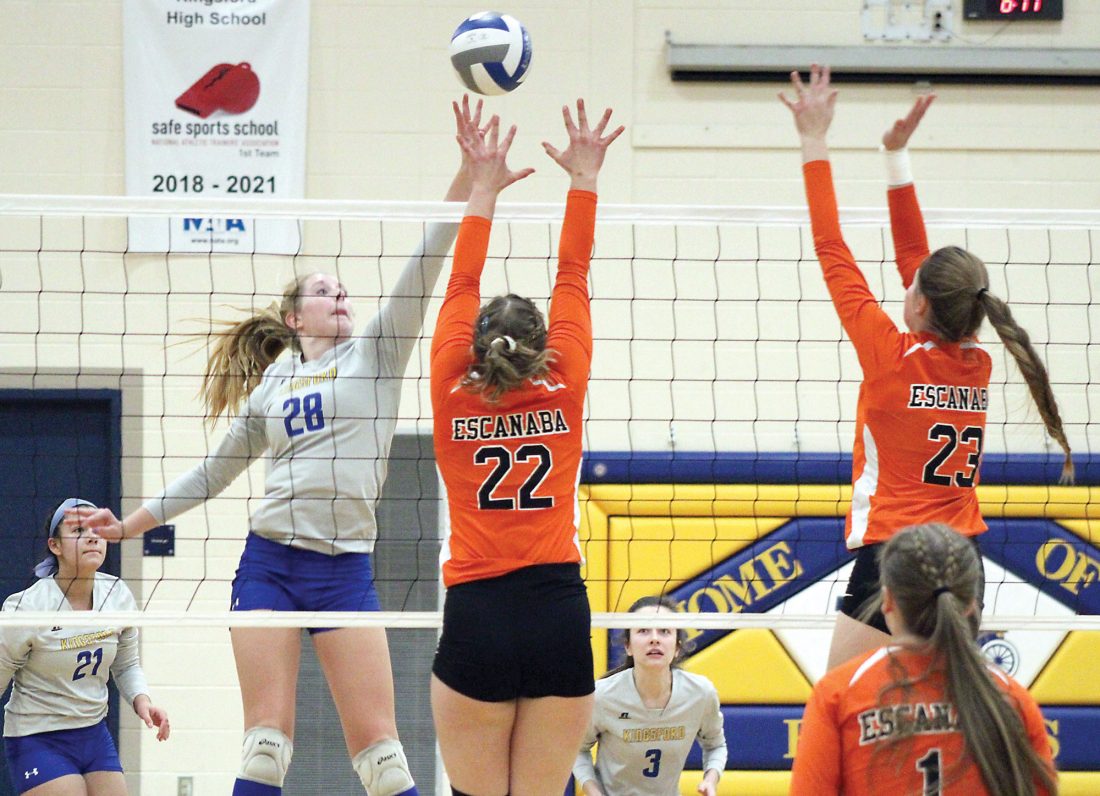 KINGSFORD — Like in most team sports, when one team has a standout player or two, usually they play a significant role in the outcome. Wednesday night was no exception as Great Northern Conference first teamer Nicole Kamin and league Defensive Player of the Year Jalin Olson led Escanaba past Kingsford 3-1 (25-23, 19-25, 25-20, 25-20) in an MHSAA Division 2 District 33 girls volleyball semifinal match.

Escanaba, which had a first-round bye, now advances to the district championship match Friday night.

“Every time this season that we played Kingsford, the match went four sets,” said Escanaba head coach Adam Lambert. “Kingsford’s offense is so strong, especially their all-conference right front hitter (Maggie Strehlow), but Jalin Olson has been so strong for us all year long, she had so many digs for us tonight. The team played well together, some girls stepped up in place of others who may not have played their best tonight.”

In some ways, all four sets mirrored one another, with no significant scoring runs for either team . Two- or three-point serving runs occurred here and there for each team. Set No. 2, which was won by the Flivvers, had the biggest point differential in the end at only six points.

There was also a long point rally at the start of set No. 1 — for the very first point of the match — that seemed to set the tone for the whole match.

“The crowd was great tonight on both sides, what a great match,” said Lambert.

Despite her disappointment to see her team’s season end, Kingsford head coach Jaclynn Kreider noted the very same points as her counterpart.

“Escanaba is the strongest and most skilled team we played all season besides Marquette,” Kreider said. “Their libero (Olson) basically is a coach on the floor. She’s a great player. I’m proud of the fight in my team tonight. The kids and the parents were a great group this season, making it enjoyable. The kids worked hard all season, which also made my job enjoyable and worth the time away from my own family.”

The first set also saw strong front row play for both teams, specifically Strehlow and Ali Doolittle for the home team. Escanaba’s front row standouts in that set, and throughout most of the match, were Kamin, Bailey Barron and Anna Smith.

Not to be overshadowed in a losing effort, Kingsford’s Brooke Kriegl, also a GNC first teamer, had a match-best 32 digs. Strehlow added 19 as well as 15 kills, and Katherine Erickson 15 digs.

Erickson added 38 assists to lead Kingsford, while Tess Henderson, also a GNC first team selection, led Escanaba with 22 assists of her own. First team front row player Doolittle of the Flivvers added 13 assists. The Eskimos’ Angela Wilson had 19 digs on the night.

The serving in the match was very strong for both teams, with Lambert noting the jump serving of senior Taylor Ray.

“She’s worked hard to get better at it throughout the season” said Lambert.

Strehlow and Kate Cook stood out serving for the Flivvers. Olson also served well in a couple different points of the match for Escanaba.

Escanaba will travel to Menominee on Friday night to face their GNC foe in the district finals.