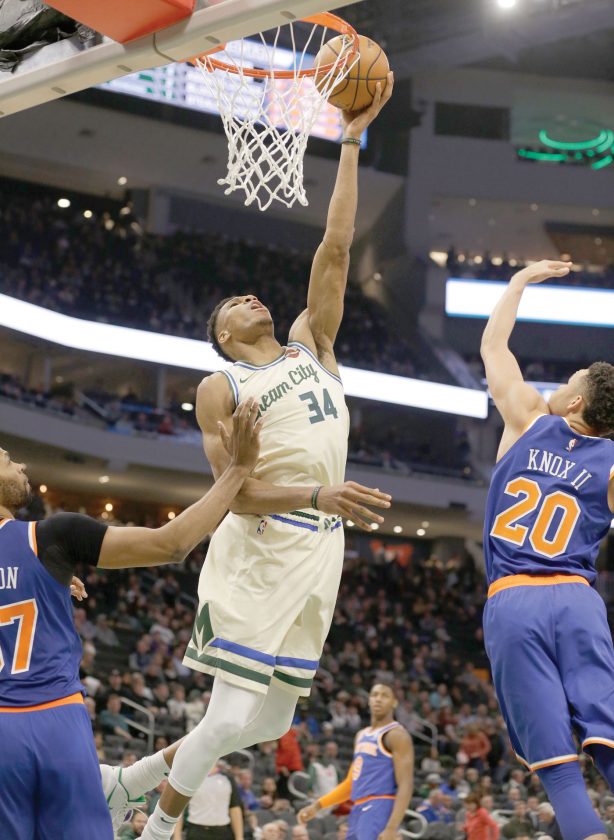 AP Photo Milwaukee’s Giannis Antetounmpo shoots against the Knicks during the second half Monday.

New York stumbled at the start and never had a chance as Giannis Antetokounmpo and the Bucks won their 12th straight game in a 132-88 romp.

Antetokounmpo needed only 14 minutes on the court to record another double-double, finishing with 29 points and 15 rebounds. The Bucks won by 44 points after beating Charlotte by 41 on Saturday, the first time in franchise history Milwaukee posted back-to-back winning margins of 40 points or more. It was the fifth time it’s been done in NBA history.

“I don’t feel we came in here with the idea we could beat this team,” Fizdale said. “That is what was most disappointing. They got whatever they wanted, whenever they wanted. We never took a real stand.”

The Bucks (18-3) led by as many as 47 and cruised behind Antetokounmpo, who pulled down his 10th rebound with 4:43 left in the second quarter for his league-leading 20th double-double.

The reigning MVP shot 10 of 14 from the field, including 3 for 4 from 3-point range, while playing 22 minutes. He exited with nearly five minutes left in the third quarter and the Bucks ahead 93-54.

“I watch and listen to him lead his guys,” Fizdale said. “He’s just impressive. The league is in good hands, I know that, when you’ve got a guy like that at the top.”

Milwaukee’s winning streak is the longest in the NBA this season and the franchise’s best since the 1981-82 season. The Bucks own the league’s top record, ahead of the Los Angeles Lakers (17-3).

“I think everybody shows up every day and they’re hungry,” Antetokounmpo said. “Nobody relaxes. We show up and do our job. We smile; we’re having fun about it and it’s nice. Usually teams tend to relax, but we don’t do that.”

D.J. Wilson added a career-high 19 points, Khris Middleton had 16 and George Hill 14 for the Bucks, who improved to 9-1 at home.

The only Antetokounmpo playing in the fourth quarter was Giannis’ older brother Thanasis, who drew cheers from the crowd when he slipped in for a layup early in the period. Thanasis Antetokounmpo, formerly a member of the Knicks, finished with 10 points and three assists.

“It was good for us to get everybody out on the court, have some other guys not play heavy minutes,” Bucks coach Mike Budenholzer said.

Middleton returned to the starting lineup after coming off the bench the previous three games. He averaged 14.3 points in his three games as a reserve, after being sidelined for seven games with a bruised left thigh. Middleton had 10 points in the first six minutes of the game. “It’s just so great to have him back with the starters,” Budenholzer said. “He’s got such a great feel and is so unselfish.”

Giannis Antetokounmpo was named the Eastern Conference player of the week after he averaged 34.8 points, 11.3 rebounds and four assists in four games last week. That included a 50-point outburst against Utah, the second 50-point game of his career.

The Bucks play at the Detroit Pistons on Wednesday.

ATLANTA (AP) — Trae Young scored 24 points, rookie De’Andre Hunter added 18 and the Atlanta Hawks snapped a 10-game losing streak with a 104-79 win over the Golden State Warriors on Monday night in a matchup of teams with the worst records in the NBA.