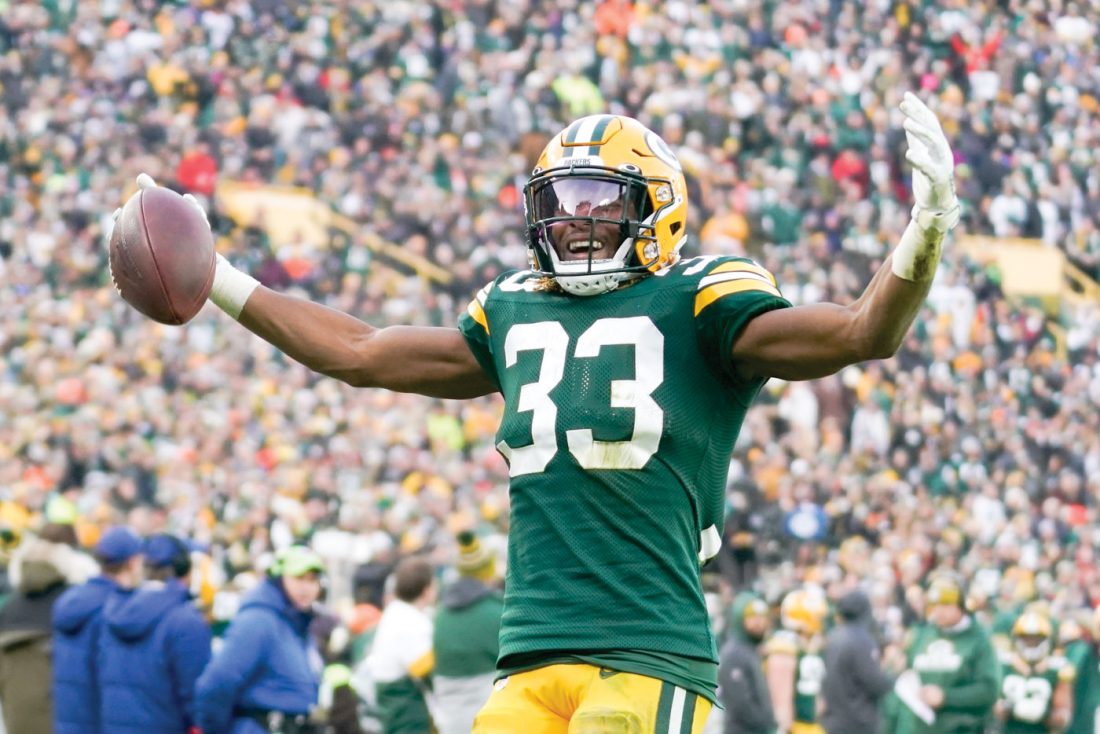 AP Photo Green Bay’s Aaron Jones reacts after a first down run during the second half against the Washington Redskins Sunday.

After a 20-15 win over the Washington Redskins on Sunday, Jones credited Green Bay Packers running backs coach Ben Sirmans with teaching him to take his time and let plays develop. Jones said thanks to Sirmans’ help, he was able to run wherever he wanted against Washington.

Jones rushed for a season-high 134 yards and a touchdown on just 16 carries, Aaron Rodgers threw for 195 yards and a score and the Packers did enough to put away the Redskins.

Jones had his third 100-yard rushing game of the season and hauled in six passes for 58 yards.

“Man, I was born in December. I’m a Sagittarius. I’ve got a lot juice left,” said Jones while laughing.

Adrian Peterson became the sixth back in NFL history to reach the 14,000-yard mark, running for 76 yards and a score for Washington (3-10), which was eliminated from playoff contention.

“It means a lot, man,” said Peterson on reaching the career milestone. “It’s history — six guys, I’m one of them. That kind of speaks for itself, so it’s an amazing feeling, an amazing accomplishment. Wish I could enjoy it more if it was a W tagged onto it, but it’s a spectacular accomplishment. When you look at the group of guys I’m in there with, it’s amazing. It’s a blessing.”

Dwayne Haskins completed 16 of 27 passes for 170 yards and a touchdown with an interception. The rookie was sacked four times, including one where he hurt his ankle.

“I thought he played hard and tough and there’s no reason he was cleared. We just noticed that he was gimping around, but he was fine,” Washington interim coach Bill Callahan said of Haskins. “He battled tough. To his credit, I give him a lot of credit for hanging in there and playing tough when he was banged-up.”

Derrius Guice left after only five carries with a knee injury.

“I’ll know a little bit more after our doctors examine him,” Callahan said of Guice. “Right now, they’re in the examination room looking at him.”

Kenny Clark and Kyler Fackrell combined for a sack of Haskins on Washington’s opening drive for an 11-yard loss. Haskins and the Redskins started the day with three straight three-and-outs in the franchise’s first-ever December trip to Lambeau Field.

“Anytime you’re going against a young quarterback, we’ve got to get pressure on him, make him make some bad throws,” Clark said.

Jones scored from 4 yards on the Packers’ opening drive. It was Jones’ 12th rushing touchdown and 15th TD of the season. Rodgers, who was 18 of 28 passing, found Robert Tonyan for a 12-yard touchdown on Green Bay’s other first-quarter score.

Haskins led Washington on an 11-play, 95-yard drive that was capped by a 2-yard run by Peterson with 3:44 to play in the first quarter. Dustin Hopkins missed the extra point.

After Mason Crosby’s field goal, Hopkins nailed a 52-yarder to cut it to 17-9 before the end of the third.

With the Packers still holding an eight-point lead with 8:28 to play, Rodgers found Jones for a 25-yard gain on third-and-14. That first down helped set up a 33-yard attempt by Crosby. The 13-year veteran was good on the kick with 2:34 to go to seal the win.

“That was pretty much the play of the game from an offensive standpoint,” Green Bay coach Matt LaFleur said. “It was looking pretty grim right there. Another third-and-long situation and just an incredible throw, incredible catch by Aaron Jones.”

Haskins linked up with Terry McLaurin on a 13-yard score late. Haskins was stopped by Blake Martinez on the 2-point conversion.

“I feel way more comfortable, but it’s a long road ahead for me,” said Haskins after his fifth career start.

The Packers host the Bears next Sunday.