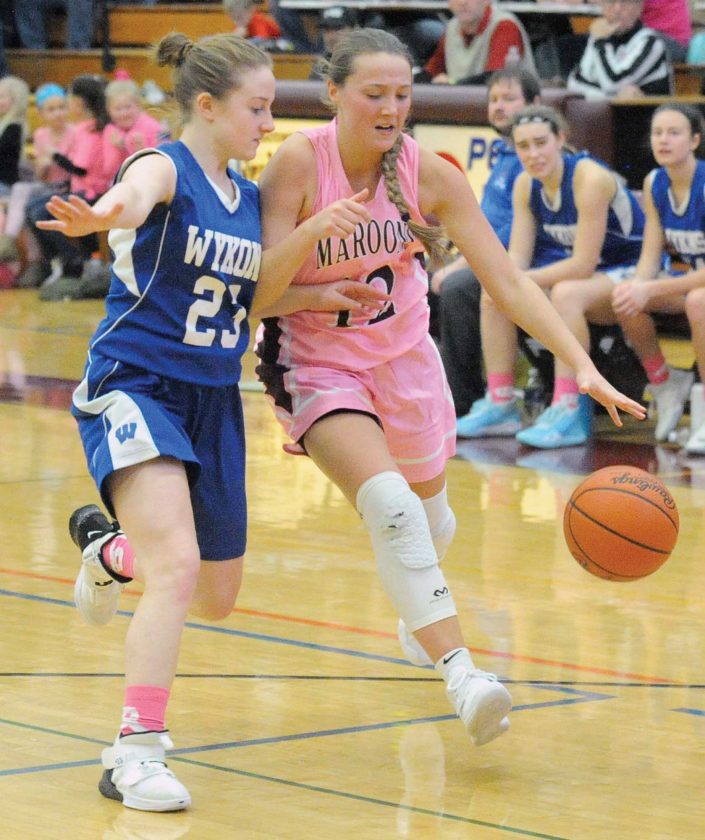 MENOMINEE — A fast start in the second quarter followed by a strong defensive effort in the third allowed the Menominee girls basketball team to pull away and hold on in the end for a 59-44 non-conference victory over West Iron County to stay undefeated Thursday on Pink Night.

Menominee (9-0) has had a great start to the season thus far and have secured the No. 1 ranking in the Upper Peninsula in Division 1-3 after the first two UPSSA polls, and the Maroons have done it by not shying away from the task of facing the opposing team’s best efforts night in and night out. WIC came in ranked No. 4 in the aforementioned UPSSA poll.

“We remind the girls on a daily basis that teams are coming for us every night so we have to be ready to go and the girls responded really well tonight,” Menominee coach Lucas Chouinard said. “I can’t say enough about how proud I am of them for the way we came out and played tonight despite being off nine days since our last game. These girls know they have a job to do when it’s game time and they came out and executed well tonight.”

Emma Anderson scored eight points in the opening quarter to help the Maroons get out to a 17-11 lead after one and picked up right where she left off to start the second with a post move for a basket, a jumper from the corner and two free throws. Shortly after, Erin Barrette stepped in front of a Wykons’ pass and dished off to Jenna Nolde for a fast break layup.

WIC finally got on the board in the second with a 3-pointer from Emily Nelson but Nolde followed up with another steal and raced full-court for a layup to cap a 10-3 run to open the quarter and give Menominee a 27-14 lead with 4 minutes, 30 seconds left before halftime.

Menominee took its biggest lead of the half when Kennedy Olson grabbed an offensive rebound off a missed free throw and scored a bucket and Barrette sank two free throws to take a 36-22 lead.

The action teetered off in the last 1:30 of the first half but Barrette lit up some fireworks when she took a pass from Anderson under her own hoop with less than 10 seconds before halftime, dribbled to the right wing and launched a step-back 25-footer that splashed home to give her team a 40-24 halftime lead.

The Wykons had some success when they were able to get the ball inside in the first half as Menominee had a few mishaps on that end, but the Maroons ability to play the passing lanes and run in transition was enough to get them a big lead after two quarters.

“We weren’t as crisp defensively in that first half as we usually are,” Chouinard said. “(Anna) Malmquist got in the paint a little too much and we didn’t have great backside help on (Emily) Nelson in the first quarter. We got a little bit better in the second but I thought we really turned it on there in the third.”

Menominee held WIC to six points in the third quarter and made life miserable for the Wykons, trapping at every opportunity and crashing down hard whenever they got the ball in the paint.

WIC got baskets on back-to-back possessions from Mya Grubbs and Anna Malmquist to cut the deficit to 42-28, but a 9-0 run by the Maroons got the lead back up to 51-28 after a bucket from Anderson — her 20th point of the game.

Another Malmquist jumper with just under two minutes remaining was the final score of the quarter for the Wykons as Menominee took a 55-30 lead into the fourth.

Halftime score was Menominee 40, West Iron County 24. With the game already well in hand, Menominee was outscored 14-4 in the final quarter with Malmquist leading the way with five points.

“Great team effort tonight,” Chouinard said. “It’s always nice to be able to get everyone in the game and have the success we did tonight.”

The Wykons, who fall to 6-3 with the loss, have a quick turnaround, with a trip to Ishpeming on Monday night for West PAC conference action. On Tuesday, WIC heads to Green Bay Southwest for a non-conference game.

“Being that it’s our first conference game, I know the girls are really hungry for that,” Chouinard said. “One of the goals was the win the conference and it starts Monday night. We know we have our hands full with them and Kamin coming here so we know we definitely have to focus on her, but (Esky) also has four other girls that compliment her very well. So we need to be at our best on Monday to come away with a win.”