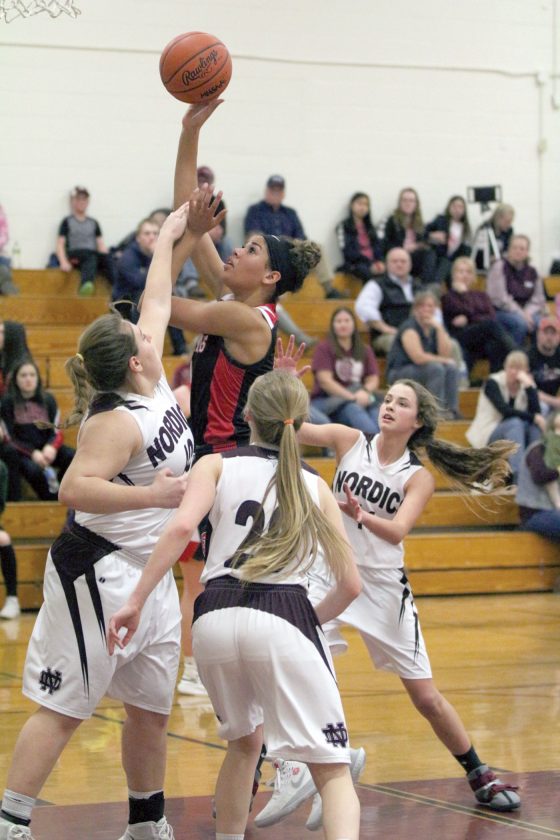 The Nordics (9-1) survived 39-34 in the Skyline Conference girls basketball rivalry.

North Dickinson head coach Kirk Mattson was relieved with the victory after seeing his team rattled out of its comfort zone.

“We didn’t rebound well, which took us out of our transition game,” he said. “We saw a different kind of game than we are used to, and we were lucky to survive.”

The Lady Trojans (4-6) scored 14 points in the final quarter, but it was too little too late, as the team continues to look for an offensive spark to compliment Simmons.

“Our defense continues to be our strong point,” FP head coach Kim Bjork said. “We got out to a slow start in the first quarter. If we can figure out another scoring threat aside from Mercedes our record looks a lot different.

“I’m proud that even though we were frustrated at times with the Nordics defense, and we made some mental mistakes, we still managed to be in the game at the end.”

Bjork noted that her team committed 22 turnovers to the Nordics’ 11.

“To be able to be in the game at the end doubling their turnovers, is a true testament to our defensive effort,” Bjork said. “Coach Mattson has a very well-rounded team, and they are very athletic.”

“I thought we were a step behind our usual pace tonight,” Mattson said. “Forest Park played very well and out-hustled us. I give them credit, they made us earn our win.”