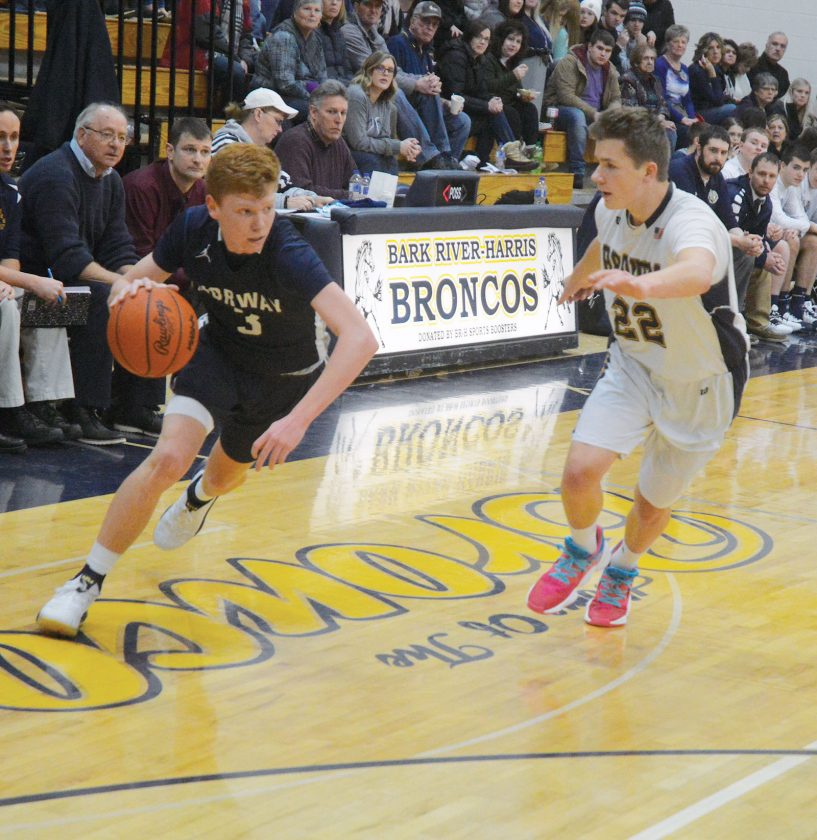 HARRIS — A fourth-quarter comeback wasn’t nearly enough for the Bark River-Harris boys here Friday night in a 55-37 basketball loss to the Norway Knights.

Norway, taking a methodical approach to this Skyline Central Conference match-up, controlled the pace for three quarters while building a 45-24 advantage.

The Broncos, coming out with full-court pressure to start the fourth, went on a 10-0 run and sliced their deficit to 45-34 on a lay-in by junior Trenton Wood-Keshick with four minutes, 12 seconds left to play.

“We didn’t do anything we prepared for,” said BR-H coach Marc Zawacki. “They came to play tonight and we didn’t. The way we played early in the fourth quarter is the way we need to play for four quarters. You can’t sit around and wait. We just didn’t execute.”

The Knights led 31-17 at halftime and didn’t score again until midway through the third stanza.

BR-H managed just one basket during the four-minute stretch, coming on a layup by junior forward Carter Zawacki 61 seconds into the third.

Norway junior guard Jeff VanHolla then drained a jump shot from top of the key to make it 34-19.

The Knights outscored the Broncos 11-5 through the remainder of the third, gaining their 21-point cushion on a fast break layup by senior forward Kody Hendricks.

“We were trying to run little bit of a patterned offense and get good shots,” said Norway coach Jeff Gallino. “Zach Seat, Gannon Bray and Nathan Paulitch played a good defensive game and I